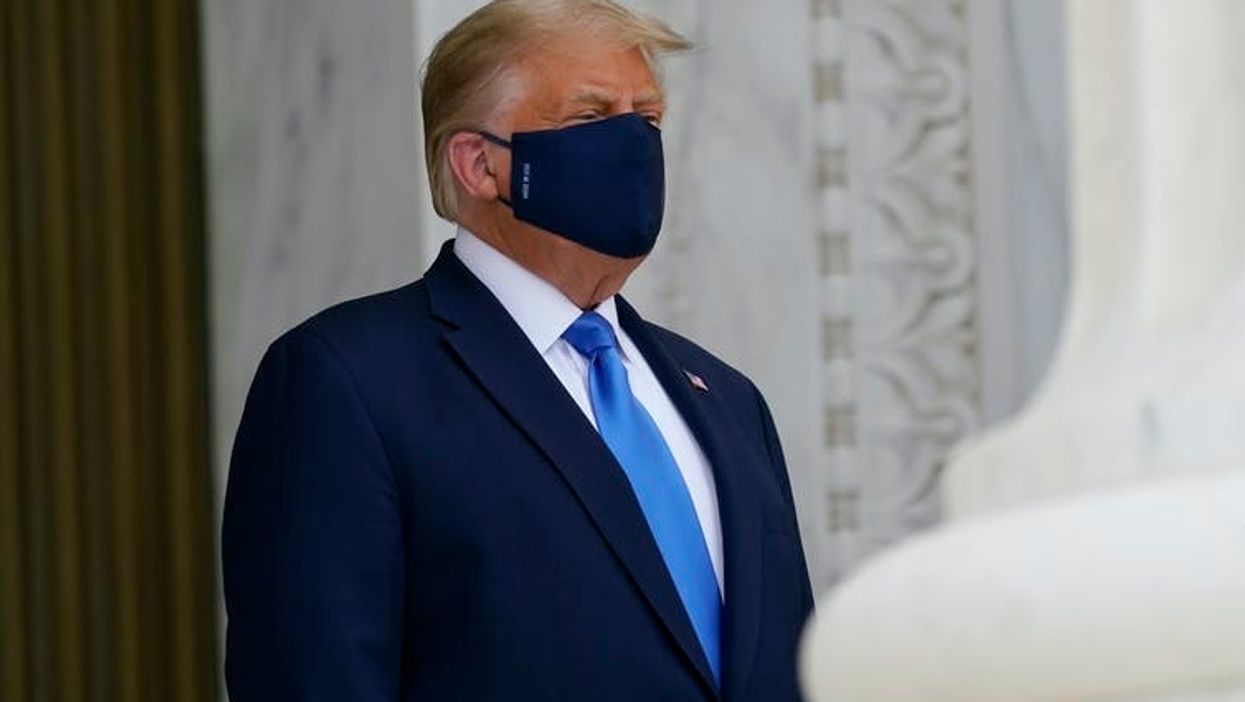 Over the course of 24 hours, the central pillar of Donald Trump's campaign strategy came crashing down. At almost any cost, Trump had diligently worked to suspend reality, put the coronavirus in the rearview mirror, and train the country's attention on Joe Biden's supposedly weak constitution and frailty. But what Trump never counted on was the possibility that he himself might pay the price for his studied ignorance.

Though the timeline of what Trump knew about his own diagnosis and when he knew it is now murkier than ever, he publicly announced he was COVID-positive in the wee hours of Friday morning just before 1:00 a.m. Eastern. Roughly 15 hours later, Trump would be airlifted to Walter Reed Medical Center Friday evening as it became clear that an entire cluster of some of his closest associates had also been infected. Ten members of Trump's inner circle and Capitol Hill allies have now tested positive, including at least four strategists who helped him prep for Tuesday's debate (campaign manager Bill Stepien, Hope Hicks, Kellyanne Conway, and Chris Christie) and three GOP senators (Mike Lee of Utah, Thom Tillis of North Carolina, and Ron Johnson of Wisconsin). While it's impossible to know exactly who was the real vector of the virus, what is exceedingly clear is that Trump's air of invincibility has been entirely destroyed.

"We're rounding the corner," Trump had taken to saying in recent weeks. Nothing but carefree good times ahead was the message he repeatedly sent to mostly maskless packed crowds at rallies and other events over the past week. Now anyone who attended Trump's Wednesday fundraiser and campaign rally in Minnesota, his Thursday fundraiser in Bedminster, New Jersey, or particularly his Rose Garden nomination of Amy Coney Barrett to the Supreme Court last Saturday, has been left to wonder whether they may have been exposed.

In fact, every Washington Republican who has tested positive this week either attended that Rose Garden event or has come in close contact with people who did. As the Washington Post vividly described, a certain intoxication imbued attendees as they tested negative and were informed they could ditch their masks. Conservatives were finally on the way to cementing a virtual super-majority on the court and Trump suddenly had a positive message to take to his supporters.

But in the days that followed, that buoyant celebration was instead revealed as a deadly serious and reckless miscalculation of the facts on the ground. And here are the facts: We are a nation that has now suffered more than 209,000 lives lost due to COVID-19. Tens of millions of Americans have lost jobs. Kids across America are still sequestered in their homes rather than returning to school, and a shocking number of children are going hungry. And it appears the nation is now headed for an extended recession.

It only seems fitting that the man who blindfolded America as he led us into this battle has now been forced to deal with the sham he perpetrated on the country in the most personal of terms.

In the meantime, the man Trump assailed as "basement" Biden and mocked at Tuesday's debate for always wearing "the biggest mask I've ever seen" isn't the man who was rushed to the hospital Friday night.