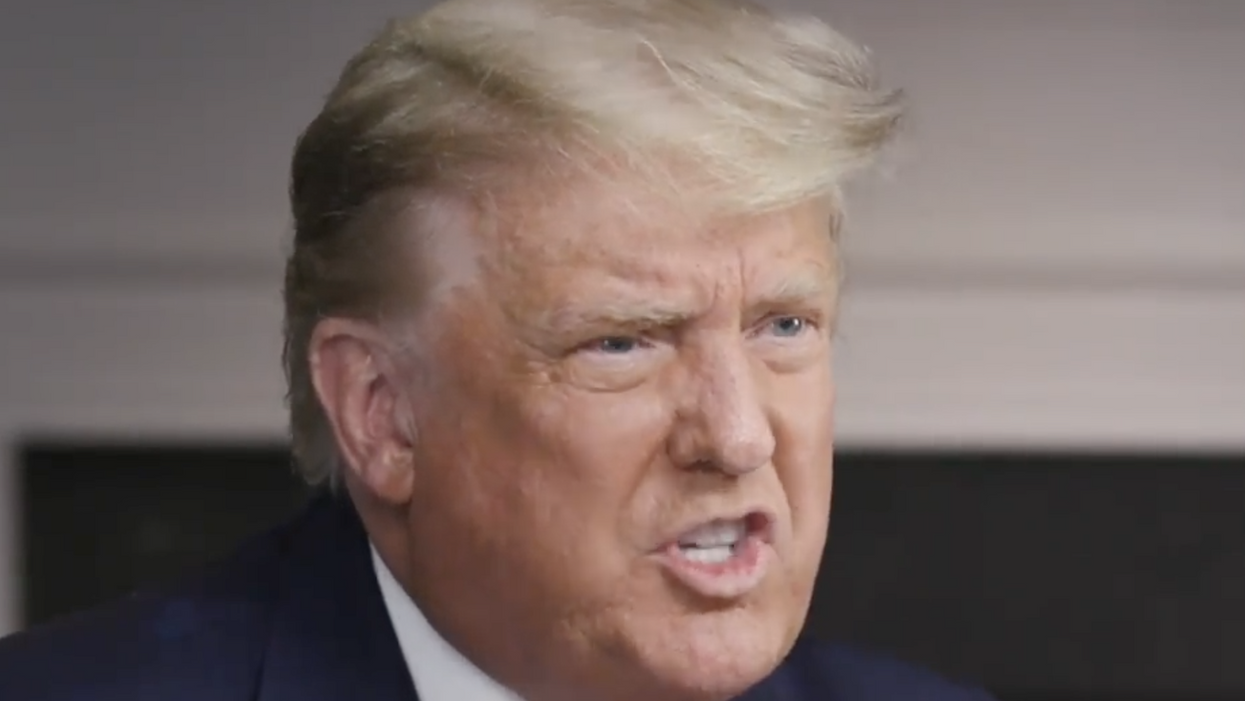 On Tuesday, President Donald Trump made clear he wasn't happy with an interview he had given to CBS's "60 Minutes," and he threatened to release footage of the discussion himself. On Thursday, he followed through on the threat — but it didn't help his case. In fact, it appears to have backfired spectacularly.

He seemed to think the raw footage — apparently taken by the White House, not CBS — would somehow make the case that he was treated unfairly. He suggested that the version of the interview produced by CBS, set to air Sunday night, would be a misrepresentation.

But it's hard to see how this version is supposed to make Trump look good. In fact, he came off like petulant child, and the fact that he can't even see that — that he thinks the footage will make him look better and attacking "60 Minutes" host Lesley Stahl will make her look worse — only further cements that image.

In the waning days of a presidential campaign that he is, by all appearances, badly losing, picking a fight and playing the victim this way is hardly a surefire strategy to convince undecided voters.

Trump even started the interview from a place of weakness, despite his efforts to present the image of a strongman. Stahl asked if he was OK with "some tough questions," and he gave a surprisingly meek answer.

It was a whiny response, and one that CBS itself probably wouldn't have aired. Trump, instead, chose to make it accessible for everyone to see.

He later attacked Stahl for starting the interview by suggesting she had "tough questions," as if that were necessarily hostile. It seems he has so accustomed himself to the coddling world of Fox News and conservative radio that he doesn't even recognize it's expected, indeed, demanded, that people like Stahl ask tough questions. Giving him a warning that they were coming was simply a kindness on her part.

In the Facebook post sharing the video, Trump said Stahl showed "bias, hatred, and rudeness," but in reality, all of that came from him. Stahl was calm and diplomatic throughout, even if she didn't agree with many of the dubious claims and lies Trump tried to push.

At one point, Trump started spewing his conspiracy theories about Hunter Biden and alleged "spying" on his 2016 campaign, and Stahl firmly but politely set him straight.

"Lesley, they spied on my campaign!" Trump interjected.

"It's been verified!" he said.

She responded simply: "No."

Releasing the footage was a particularly clumsy and self-destructive move on the eve of Trump's last debate with Biden because it only gave the former vice president's team more of a sense of the arguments the president is making in his defense. If Biden's team knows what it's doing, they've prepared carefully crafted responses for Trump's assertions.

The video also suggests that, contrary to what many of the president's supporters are hoping for, Trump is not in a more calm and less combative mood. His standing in the polls fell after his first debate with Biden, where Trump berated and constantly interrupted his opponent. It's hard to imagine we'll see a gentler Trump this time.

More speculatively, it seems pretty likely that American voters, even many Trump voters, are tired of his incessant fights and feuds. They'd prefer a president who tries to get along with the press, even when he has disagreements with them, and isn't always on the attack. That might be a version of Trump that could more easily win re-election. If he were more insightful and had more self-control, that's who he'd be in the final days of a campaign. But that version of Trump is nowhere in sight.

Look at the bias, hatred and rudeness on behalf of 60 Minutes and CBS. Tonight’s anchor, Kristen Welker, is far worse! #MAGA

Look at the bias, hatred and rudeness on behalf of 60 Minutes and CBS. Tonight’s anchor, Kristen Welker, is far worse! #MAGA