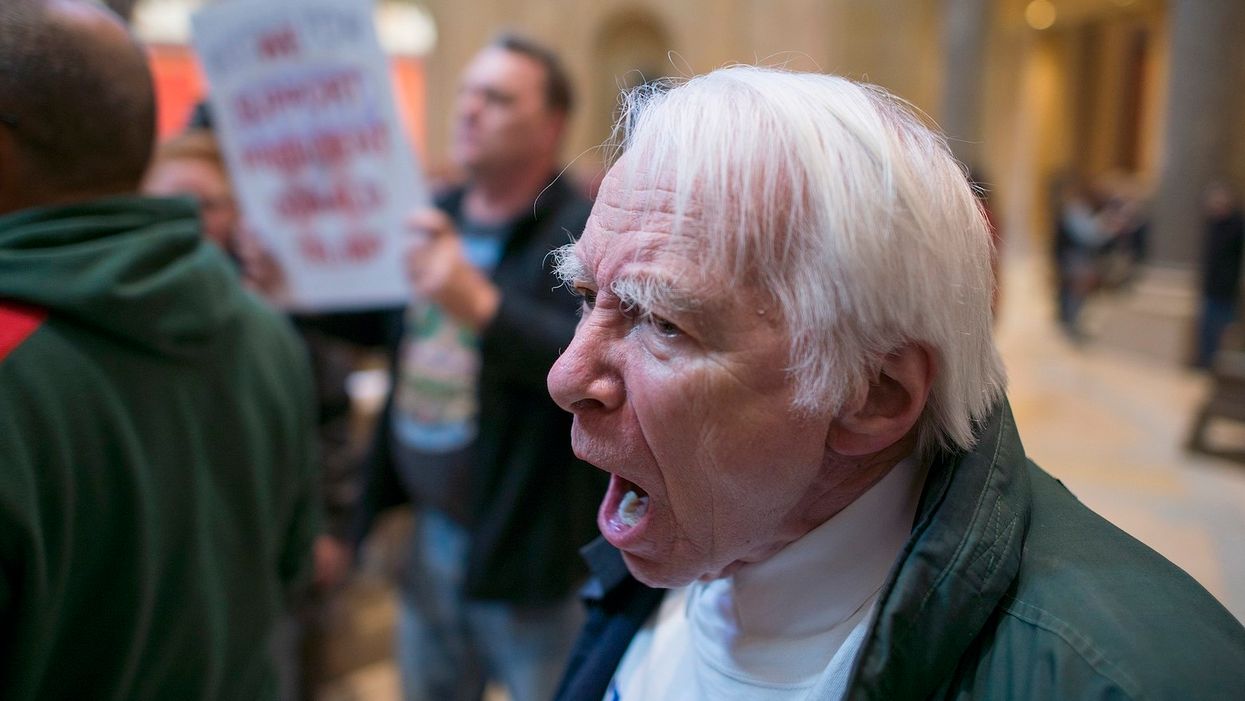 One of the more interesting (and somewhat confounding) polling results in this election cycle has been the belief among members of both parties that Donald Trump will win re-election, regardless of who they're actually planning to vote for. His approval rating has been stuck in the low 40s throughout his term, which is unprecedented, and he's been behind in the polls from the beginning of the campaign. Yet most Americans still remain convinced that he is going to win. This is from Gallup in early October:

How can this be? Well, of course it all depends on what the definition of "win" is.

The explanation for the Democrats and many Independents is obvious. With all of Trump's talk about mail-in voter fraud and lawsuits and promises of intimidation at the polls, they believe it's possible that he will pull out all the stops to create or fake a victory regardless of the legitimate electoral outcome. With his statements to the press that he wants the ninth Supreme Court seat filled in order to ensure a victory, it's not being all that paranoid to assume it could happen.

Meanwhile, the Republicans are living in an alternate universe in which Trump holds a massive lead in all the polls and is heading for a landslide. They believe this because he tells them that every day.

It's unlikely we will have full results on election night next week, since some states won't even begin counting mail-in votes until that day, while others allow ballots to arrive some time after Election Day. There's certainly the possibility of lawsuits if contests are close. Nonetheless, we will probably know the winner within a few days — Trump's scenario that it could take "months" is hot air — and it's worth pondering how the two sides will react.

According to this Reuters-Ipsos poll, more than four in 10 voters on either side will not accept the results of the election. It doesn't go into details, except to say that 22% of Biden supporters and 16% of Trump supporters say they would engage in street protests or violence if the other side prevailed. But let's look at the reasons that might happen.

Obviously, if Trump prevails there will be an uproar among Democrats despite the fact that a large number of them believe he's going to win anyway. But in the unlikely event that he wins outright without any legal shenanigans, partisan court victories, discarding of valid votes or intimidation at the polls, I suspect they will be even more shell-shocked than in 2016, but will accept the outcome with depressed equanimity. If they take to the streets under that circumstance, it might be to stage a protest against pollsters for their overwhelming incompetence. Joe Biden has had a steady and substantial lead in all the polls for months now.

On the other hand, if despite a clear defeat at the ballot box, Trump nonetheless finds a way to "win" through lawsuits decided by right-wing judges who throw out legal votes or takeovers by GOP state legislatures, there will be a massive outcry. People understand that Republicans might try this, but that doesn't mean they'll stand for it. In that scenario, our nation would face the worst constitutional crisis since the Civil War. God help us if that comes to pass.

But what about Republicans? They're already living in a miasma of disinformation, conspiracy theories and lies. Alex Wagner of Showtime's "The Circus" interviewed a bunch of fanatical Trump-supporting militia members and reported that for whatever reason they believe Trump will win in a landslide:

Reporting from Trump rallies on cable news inevitably shows the same attitude even among the more mainstream voters. Trump's supporters simply do not believe that he can legitimately lose. And why should they? Their Dear Leader — the only source of information they trust — has said so explicitly, over and over again. In fact, that claim has already been institutionalized:

Multiple social media analyses, including one conducted by a group of nonprofit researchers on behalf of NBC News, have detailed how a collection of the president's relatives and members of his inner circle, along with far-right media manipulators and an online army of disciples, has created or spread false or misleading content that supports his "rigged" narrative, while his campaign is urging supporters to join an "army" and "defend their vote."

Every single day, Trump is out on the campaign trail threatening to defy the election results. His newest rationale (one of many) is that "they spied on his campaign" and he didn't get a "friendly transition" in 2016, so he sees no reason to give the Democrats one in 2020:

What this adds up to is this: if the polls are right and Biden wins the election by a healthy margin, Trump voters almost certainly won't accept the results. Put yourself in their shoes and it isn't that hard. Four years ago, a lot of Hillary Clinton voters felt as if they'd had the wind knocked out of them by that shocking and unexpected result. That's what these Trump voters are going to feel, except that the dissonance will be a thousand times worse. They are expecting a Trump landslide, and have been told by him that the only way he can possibly lose is through fraud on a massive scale.

The difference between then and now, of course, is that Clinton and Barack Obama and every Democratic official immediately accepted the results and their supporters largely agreed voters that Trump had won, at least under the antediluvian constitutional machinery of the Electoral College. There is every reason to think that Trump will do quite the opposite, and I'm afraid there's no reason to believe we can depend upon Republican officials to step up and do the right thing.

And there's that undeniable pall that hangs over the whole process, with the possibility that well-armed Trump supporters who have been told they simply cannot lose the election will try to take matters into their own hands. After all, some militia-style goons have already plotted to kidnap and "try" Democratic officials for "treason." We can't predict how far they'll be willing to go if their world is turned upside down by an unexpected electoral defeat.

Shortly after the election in 2016, I wrote a column about the "sore winner" syndrome, in which angry Trump supporters were assaulting Democrats and screaming at them on the streets, even though their guy had won the election. This reflects a longstanding attitude among this political faction in which it's never enough to win by normal means — they can't be happy about until they force their rivals to admit they were wrong and offer an unconditional surrender.

Imagine what these people might do when they lose.