Trump is struggling with seniors in these key battleground states: poll 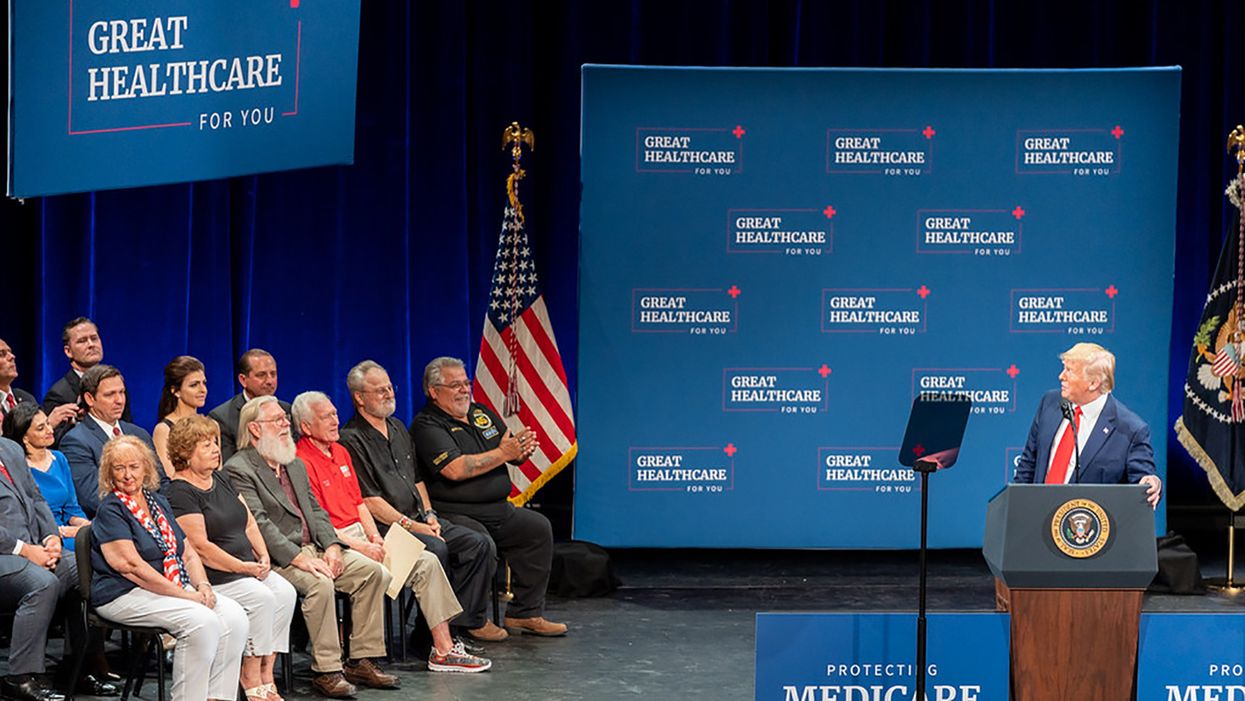 President Donald J. Trump addresses his remarks prior to signing an Executive Order on Protecting and Improving Medicare for our Nation's Seniors Thursday, Oct. 3, 2019, at the Sharon L. Morse Performing Arts Center at The Villages, FL. (Official White House Photo by Shealah Craighead)

On October 14, an article by The Guardian's Richard Luscombe stressed that President Donald Trump was underperforming among 65-and-older voters in Florida compared to 2016 — which is bad news for the Trump campaign in light of how many retirees live in the Sunshine State. But the following morning, on October 15, Morning Consult released some polling on Trump and senior voters — and the polling underscores the fact that Trump's problems with voters who are 65 and older goes way beyond Florida.

According to Morning Consult's Eli Yokley, former Vice President Joe Biden "has support from the majority of seniors in Michigan, Pennsylvania and Wisconsin, while he and Trump are virtually tied in Arizona, North Carolina, Ohio and Florida." Biden, Yokley reports, "leads Trump by 12 points among women ages 65 and older, 54% to 42%, compared to a narrower three-point lead among men in that age group, 49% to 46%."

Older voters can make or break an election because they are the most likely to vote, and in 2020, Biden appears to be performing well with the 65-and-older demographic.

Yokley explains, "The oldest Americans, who have outsize influence in elections due to their higher propensity to vote, helped fuel President Donald Trump's victory over Democrat Hillary Clinton in 2016. But four years later, the voting bloc is solidly behind Democratic nominee Joe Biden, contributing to the former vice president's advantage in states that could trigger the president's electoral defeat. According to Morning Consult Political Intelligence tracking, Biden leads Trump by 8 percentage points among voters ages 65 and older, 52 percent to 44 percent. The Democrat's standing with seniors marks a dramatic 23-point net swing compared to Morning Consult's 2016 exit polling, which found Trump won America's oldest voters by 15 points."

If Biden carries every state that 2016 Democratic presidential nominee Hillary Clinton won four years ago and flips three Rust Belt states that went to Trump — Pennsylvania, Michigan and Wisconsin — that would get him to the 270 electoral votes he needs to win. And according to Morning Consult's polling, 65-and-older voters prefer Biden over Trump by 9% in Pennsylvania, 12% in Wisconsin and 13% in Michigan.

Ohio is a Rust Belt swing state in which Democrats often struggle these days. But according to Morning Consult, Trump is trailing Biden by 1% among 65-and-older voters in the Buckeye State.

In Arizona, a once-red state that has evolved into a swing state, many polls have shown Biden with single-digit leads. Morning Consult's polling shows Biden trailing Trump by only 3% among 65-and-older voters in Arizona — whereas Biden leads by 43% among Arizona voters in the 18-34 age range. The lesson for Biden, according to Morning Consult's polling, is that in Arizona, Biden needs to be even more aggressive in his senior outreach while getting as many younger voters to the polls as possible.

Morning Consult also found that among 65-and-older voters, Biden is leading by 2% in Florida but trailing Trump by 2% in North Carolina, 11% in Texas and 15% in Georgia. But even though Texas and Georgia are light red at this point, many polls have found that when all ages are factored in — from Generation Z to Generation X to the Silent Generation — Biden is competitive in those states. Morning Consult found that 55% of 18-34 voters favor Biden in Texas, while 60% of 18-34 voters favor Biden in Georgia.

Not surprisingly, the COVID-19 pandemic is a key factor among the seniors who are supporting Biden.

Yokley notes, "The deadly pandemic — which began to surge in the United States in March as Biden tightened his grip on the Democratic nomination — appears to have at least helped fuel Trump's vulnerability with the group.… Biden appeared to gain a foothold after the pandemic spread, and his support has continued to grow as the case count increased."