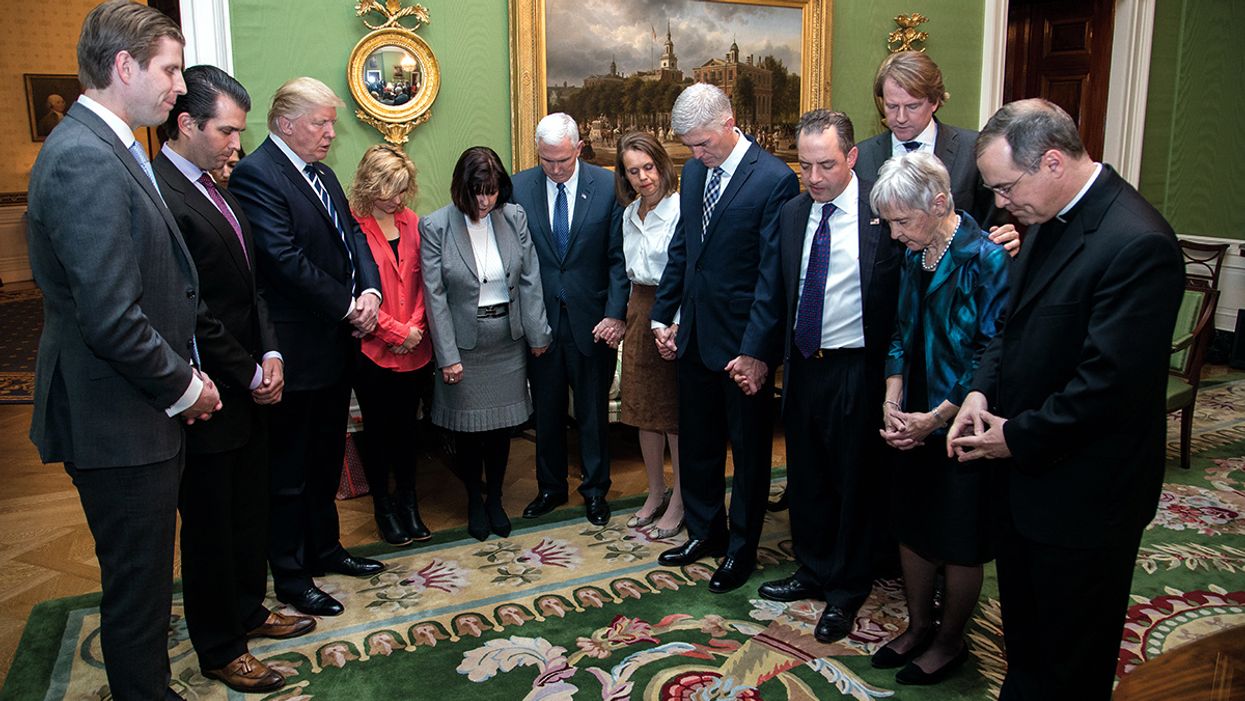 Photo via the White House.
Evangelicals went all in on Trump and he played them like ‘suckers’: ex-White House advisor
Hunter
and
Daily Kos
October 20, 2020

In the last weeks of the campaign, Donald Trump is collapsing in on himself. That's the story his campaign and White House team itself seems to want to push in the scurry to avoid blame themselves. On Sunday, a New York Times piece reported on gloom, grievance, and "backbiting" among Trump's staff as his reelection prospects dim, but more of note is the blame getting directed at the big orange hateburper himself.

"Among some of Mr. Trump's lieutenants," reports the Times, there is "a sense that the best they can do for the final stretch is to keep the president occupied, happy and off Twitter as much as possible, rather than producing a major shift in strategy."

Yes, it is truly a shocking development. In the last weeks of the campaign, Donald Trump is ignoring all advice, doubling down on his most hateful behaviors, and choosing closing themes based solely on his own obsessions, grievances, and malevolence. Whoever could have seen that coming? (Aside from everyone.)

The results speak for themselves—no, are so toxic that they are noticeable even to a four-year-flaccid national press. Trump's propensity to target women, select political enemies for demonization, and his renewed vigor in seemingly attempting to goad supporters into violent acts against them are becoming topics with more public weight than any campaign message the shouting twit threatens to stumble into in these last preelection days. It turns out that Donald Trump, left to himself with campaign staff abandoning any further pretense at controlling him, is hateful, spiteful, anti-democratic, misogynistic, openly racist, paranoid, and self-absorbed to the point of self-destruction.

If there's anyone who has survived through four full years of Trump's attentions and they didn't predict that, among his inner circle, they would have to be burrowed so far up his *** that they can peek out his nostrils.

The problem here is that Trump is only going to get worse in the next few weeks—no matter what. If polls continue to look bleak, his narcissistic bitterness will overwhelm him and his demands of his supporters will get even more extreme. His attacks on Democratic leaders that take pandemic precautions—which he considers to be personal attacks on himself and therefore illegitimate, whether the moves save American lives or not—have been getting more vigorous, but his inner circle continues to support those attacks wholeheartedly. He is already obsessing over the notion of invisible election "fraud" as means of delegitimizing the results—as a malignant narcissist, he will adopt whatever delusion is necessary to protect himself from the notion that his own actions are responsible for his failures, as opposed to widespread conspiracy against him.

And if he wins? God help us. A Trump fully untethered from ever having to face voters again, supported by an attorney general who has been so eagerly crooked in tilting the scales of justice that he may already rank as the worst in history, backed by a party fully purged of any but the most obscene lawmakers hailing from the most hard-right of gerrymandered districts; there would be no institutions left. No government scientists, no statistics gatherers, no oversight, no public services, nothing but a hierarchy of sycophants from Washington down to every office. His "conservative" team is turning the Centers for Disease Control and Prevention into a Trump-tailored propaganda shop during a worldwide pandemic. There's literally nothing left they would not be craven enough to do.

The good news is it looks like he's losing. Possibly even for real this time. The transparent Russian propaganda, though propped up this time by Republican senators and the clownish Rudy Giuliani, isn't motivating his hard-right base into nearly the froth against his male opponent that near-identical hokum spurred when directed at a woman. The Trump question of what do you have to lose has been clarified to all. The notion of choosing a reality show host as world leader does not have the same appeal as it once might have across generic American suburbia.

Trump's campaign and White House staff seem to know it. Last week saw a Washington Post report of the angst of Trump's phalanx of worst enablers as they fretted over possible career repercussions of 1) endlessly lying to the American people and 2) support a corrupt, cretinous toad of a man in 3) reforming the government into a white nationalist-premised, incompetent kleptocracy while destroying longstanding democratic institutions and premises. Consequences! Can you imagine there being consequences for such things? Truly, conservative pundits are beginning to stammer, it would be the end of democracy as we know it.

Lord help us, we are almost there. Only to Election Day, mind you: After that, even under the best-case scenario of American voters delivering a thumping to Trump so severe that not even his scandal-mongers can discredit the results, we still face an embittered Trump and Republican Party willing to dynamite the country into oblivion rather than let it pass unscathed into non-Republican hands.

For now, let's take some comfort in Dear Orange Leader apparently beginning to realize that he is in deep, deep trouble. Hopefully it will unhinge him mostly in ways that harm only himself and his malevolent aides, allies, and hangers-on. If we're lucky he'll demand William Barr arrest himself, or will turn on Rudy Giuliani for failing to sell the Moist Laptop Of Secret Crimes story with enough vim.