Trump getting COVID is the quintessential October Surprise for science denial 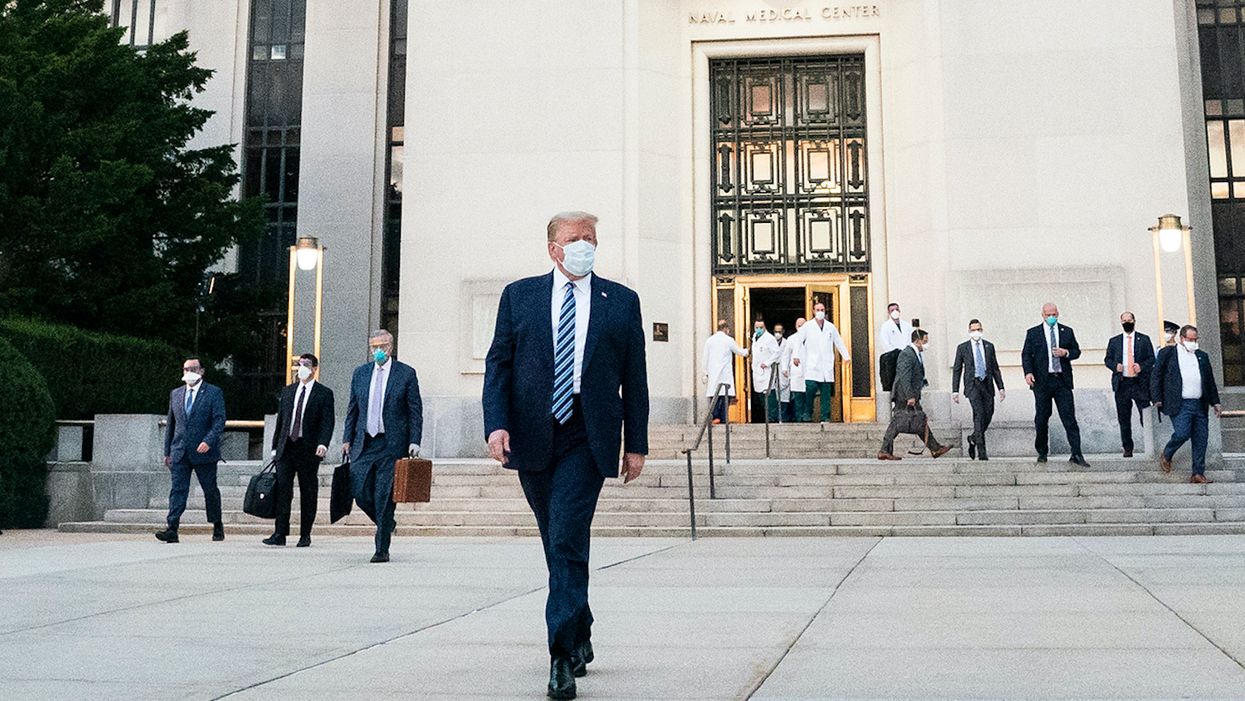 This piece first appeared at The Real News Network.

Back in 2012, climate science denial created an "October Surprise" moment for the presidential election and a turning point against the presidential prospects of Republican candidate Mitt Romney. In 2020 science denial is again a game changer, this time for Republican President Donald Trump, who has continued to downplay COVID-19's seriousness, even after he was hospitalized for the disease which has killed more than 210,000 Americans.

A month before Hurricane Sandy reached landfall first in Atlantic City, New Jersey, and then New York City, killing 37 people in New Jersey and 44 in New York, and causing $70 billion worth of damage, Romney downplayed the threat of the climate crisis.

"President Obama promised to begin to slow the rise of the oceans," said Romney, pausing to do a clearly scripted lip bite, as if to stop himself from laughing along with the audience. "And to heal the planet. My promise is to help you and your family."

On Oct. 31, just two days after the hurricane's landfall, the now-defunct group Forecast the Facts released an advertisement titled "Romney vs. Sandy." It got hundreds of thousands of views on YouTube, a huge haul for a climate video, and aired in key swing state TV markets.

"Mitt Romney must hope we forgot that he mocked climate change at the Republican National Convention, to the raucous cheers and applause of the GOP delegates," Brad Johnson, then a campaign manager for the group Forecast the Facts and now a progressive political consultant based in Washington, DC, said at the time in a press release introducing the video. "We didn't forget. We're putting out this video to remind every voter struck by Sandy that Mitt Romney thinks the poisoning of our weather is a joke."

RL Miller, then an independent climate activist and today a member of the Democratic National Committee and executive director of the group Climate Hawks Vote, explains that Romney's rhetoric parallels Trump's downplaying of the novel coronavirus in recent days, weeks and months.

Johnson, who helped to create the 2012 ad and move it through the blogosphere, said he believes what links 2012 and 2020 together is that the Republican Party still has a stance antithetical to science. Miller added that this year, "the messaging writes itself" for Trump and COVID-19.

"I think the only problem is that too many are going to make the same point over and over and over again," she said. "Trump has said a lot of stupid things regarding COVID throughout the last six months and it's all now fair game."

Johnson added that while there is much to criticize about Biden when it comes to the climate crisis and his lack of support for single-payer healthcare during a pandemic, he is nevertheless, the head of a "party that, like, accepts that science is real and that government can help."

What magnified the Sandy moment all the more in 2012 was the fact that, up until that point, climate change was hardly discussed at all on the campaign trail by either candidate.

Obama was in the midst of expanding fracking, pipeline, and exports buildout throughout the United States and spreading fracking globally. Meanwhile, Romney's campaign had a press secretary who was a former fossil fuel industry public relations operative named Andrea Saul, with a public relations background in climate change denial. Saul said in 2011 that "CO2 is a naturally occurring gas. Humans emit it every time they exhale."

All of the presidential debates also were devoid of discussion on climate change, provoking a campaign by advocacy groups to end "climate silence." And then Sandy arrived, completely flipping the election season script.

Climate change went from outside of presidential discourse to the center of the race, just over a week before Election Day. This was epitomized by a Bloomberg Businesweek cover story published on Nov. 2, four days before the public went to the polls, with the iconic headline "It's Global Warming, Stupid."

Sandy compelled Obama to react in his role out in the field as a commander-in-chief first responder, even forging an alliance with Republican New Jersey Gov. Chris Christie, who now has COVID-19, and helped prepare Trump prepare for his first debate against Biden. Christie is one of five people, out of 10 total, who came out of the debate preparation session with the virus.

In Obama's first comments on climate change during his entire 2012 campaign, Obama said in an Oct. 27 interview on MTV that "we're not moving as fast as we need to" on taking climate action.

"And this is an issue that future generations, MTV viewers, are going to have to be dealing with even more than the older generation," Obama continued. "And there is a huge contrast in this campaign between myself and Governor Romney. I am surprised it didn't come up in one of the debates…I believe scientists who say we are putting too much carbon emissions into the atmosphere and it's heating the planet and it's going to have a severe effect."

In that way, COVID-19 has played out far differently in the 2020 election cycle. News about the pandemic now plays out on a minute-by-minute basis, an all-consuming reality which has upended society.

"This is kind of like the only news story. So it doesn't really require much, like additional messaging and things," Johnson said.

And yet, the messaging around Trump's COVID-19 denialism has proceeded and parallels the efforts Johnson and his colleagues made in 2012. Miller boiled the message down to a parallel to the Bloomberg cover story, saying it's "I mean, at this point, you just run the ads. What would be the equivalent? It's the virus science 101, stupid."

That message is already playing out in real time by outside campaign groups, particularly the Lincoln Project, a coalition of 'Never Trump' Republicans aiming to oust Trump from the White House. Akin to the Romney ad showing him downplaying climate change while Hurricane Sandy ravaged New York and New Jersey, the Lincoln Project ads play clips of Trump downplaying the virus' potency alongside his own personal experience—surviving, for now, thanks to access to the best medicine and healthcare available—next to the reality of people dying from it due to his own mismanagement of the public health crisis.

It is too soon to say what impact Trump getting COVID-19 will ultimately have on the election, though polling in recent days both nationally and in key swing states looks very bad for Trump. Yet even the idea of a normal transition of power, if Trump loses, appears quaint in 2020.

That aside, Romney himself concluded that Sandy helped shift votes away from him and towards Obama. Other reporters agreed, such as The New Yorker's John Cassidy.

"Except for a few days after the Denver debate, his grip on the electoral college has never been seriously threatened. But if Sandy didn't cost Romney the election, it may well have cost him his last shot of winning," Cassidy wrote one day before Election Day in 2012. "At the very moment he needed to appeal to undecided voters and make up ground in places like Iowa and Ohio, the storm knocked him off out of the headlines and robbed his campaign of any momentum it may have had."

Still, however the dust clears in 2020, Miller pointed out one other key difference between COVID-19 coming to an end and combating climate change, which is how much more difficult the latter will be to solve than the former—no matter who wins on Election Day.

"And so Trump might talk to us about a vaccine for the virus and we can afford to be cynical about that," she said. "But we all know that there's no vaccine for climate change."