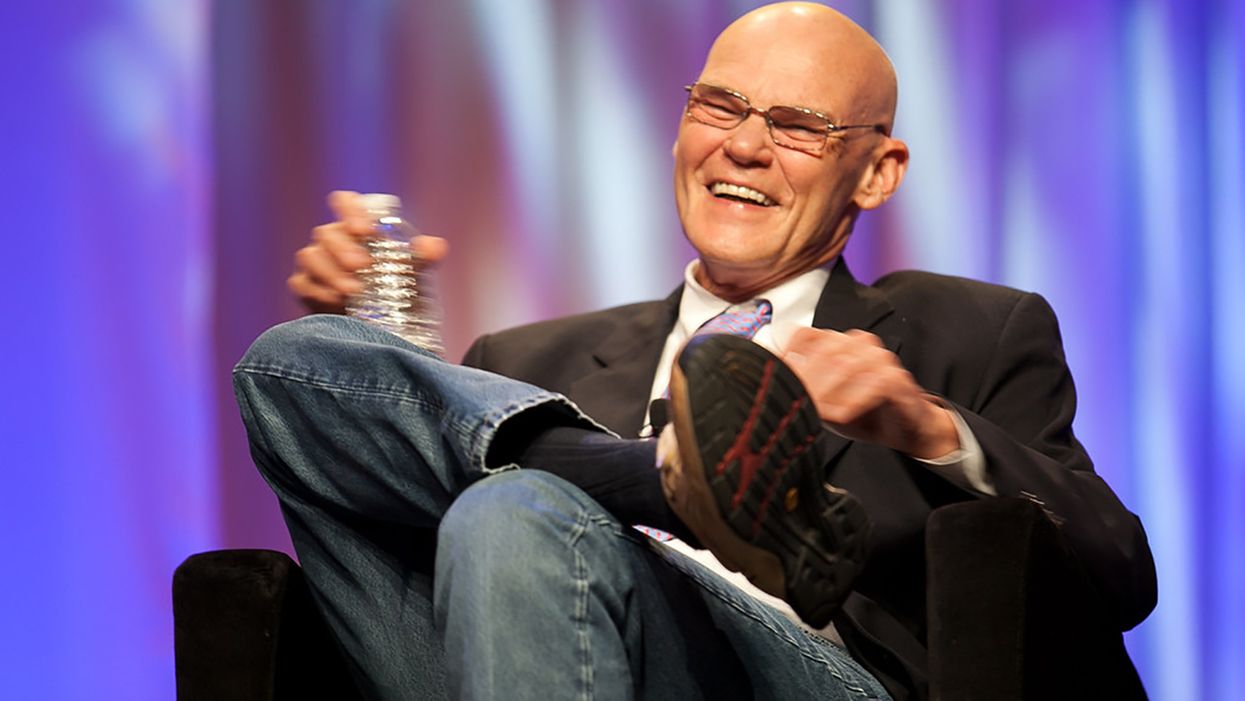 James Carville is not known for his contributions to right-wing websites. But politics make strange bedfellows, and the veteran Democratic strategist finds some common ground with Never Trump Republicans in an October 15 article for the conservative website The Bulwark — arguing, in essence, that conservatives, liberals and centrists all have a mutual interest in removing President Donald Trump from office on Tuesday, November 3.

"Donald Trump's authoritarian presence behind the Resolute Desk is amongst the gravest threats America has ever faced from within," the 75-year-old Carville stresses. "And Americans have risen to meet this threat."

Earlier this year — before former Vice President Joe Biden won the 2020 Democratic presidential nomination — Carville sounded pessimistic during his appearances on MSNBC. Carville feared that Sen. Bernie Sanders of Vermont, if nominated, would be defeated by Trump in the general election. But now, he is optimistic that Biden is headed for a landslide win. And as Carville sees it, the United States' "darkest hour" will end when Americans across the political spectrum reject Trump's authoritarianism on November 3.

"We are constantly told that America is too divided, too hopelessly stricken by tribalism to come together anymore," Carville explains. "Well, I'm here to proclaim that this received 'wisdom' is just plain wrong. If you were to run a cable wire through the heart of America right now, you would see an image of an exceedingly diverse coalition of people who challenge that assumption at its core. You'd see (a) suburban woman from a once-Republican stronghold in Maricopa County, Arizona standing alongside a retired grandfather in Florida, a college student in Brooklyn, a Latina mom in Raleigh, a Black computer programmer in Houston — and yes, standing alongside even a former Trump voter in Wisconsin who has now changed his mind. This coalition is exactly why an incumbent president is on the precipice of a catastrophic defeat."

According to Carville, "This is more than a campaign. This is a crusade for America."

Biden's campaign is enjoying a wide range of support. Everyone from staunch progressives like Sanders, Sen. Elizabeth Warren of Massachusetts and Rep. Alexandria Ocasio-Cortez of New York City to Never Trump conservatives such as Washington Post columnist George Will, former Ohio Gov. John Kasich and Sen. John McCain's widow, Cindy McCain, has been rooting for a Biden victory. And Carville, in his Bulwark article, stresses that the importance of 2020's presidential election goes way beyond the policy differences of Democrats and Republicans. Americans all over the political spectrum, according to Carville, are determined to bring Trump's presidency to an end.

"In less than two weeks," Carville writes, "I will be 76 years old…. I can say with certainty that in all my years, joining in this crusade to take America back from the brink of destruction is the greatest thing I have ever been a part of in my life. This crusade is something noble."