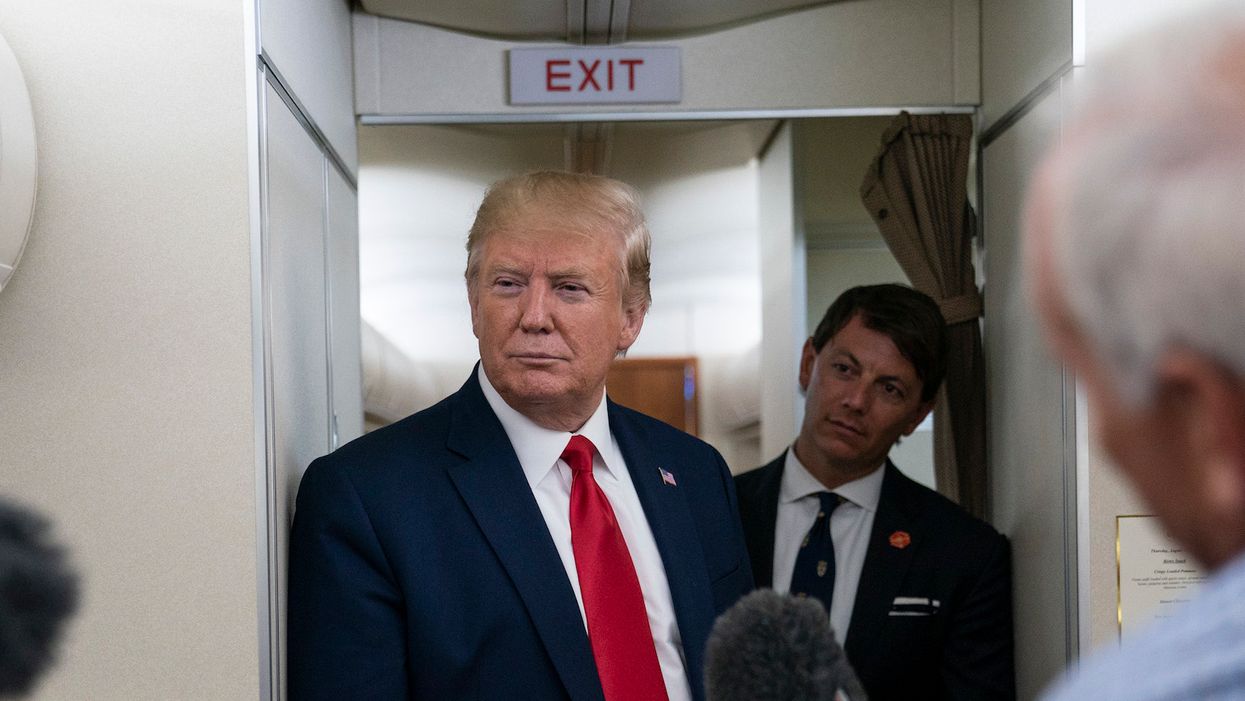 Donald Trump's stalwart belief that he can make the coronavirus pandemic disappear through the magic of bullshit has permeated all levels of his administration. Even so, it was a bit of a shock to see the White House Office of Science and Technology put out a press release on Tuesday giving credit to Trump for "ending the COVID-19 pandemic."

Meanwhile, in the real world, hospitalizations are up 46% from a month ago. A reported 983 people died of the disease on the same day the White House crowed about "ending" the pandemic. On Wednesday, according to the Johns Hopkins University COVID-19 Dashboard, the U.S. will pass 8.8 million cases and 227,000 deaths.

It remains unclear how this language about "ending" the pandemic even got into an official White House press release, since the report it's announcing doesn't say anything the end of this disaster, even though it features a lot of hilarious puffery of Trump for signing a couple of bills that were passed by Congress to provide money for research. That's certainly proof that federal bureaucrats know the importance of flattering Trump's massive ego, but nothing more.

All signs point to this being yet another situation where the White House is pressuring formerly-apolitical federal offices to serve as propaganda outlets for Trump's disinformation machine.

For instance, the press release quotes Ivanka Trump gushing about how her father's "investments in science and technology ensure America stands ready to solve today's most pressing challenges."

The language in the press release also reflects Trump's own campaign rhetoric, in which he continues to act as if he can make the pandemic disappear by pretending that it's not real and insisting that anyone who says it's serious is just faking their concern in order to score political points against him.

At a packed and largely mask-free rally in Omaha, Nebraska, on Tuesday night, Trump called it "fake news" when the media covers "COVID COVID COVID COVID," continuing his ongoing and bizarre reprisal of a "Brady Bunch" joke from the 1970s.

There is, of course, nothing fake about the pandemic news. On the contrary, the transmission rate is hitting record highs, often above the peaks from the first two waves of the spring and summer. The transmission rate is 39% above where it was two weeks ago. There were 500,000 new cases just in the past week, and the national case count is swiftly approaching 9 million people.

As Dr. Anthony Fauci of the National Institute of Allergy and Infectious Diseases said in a discussion hosted by Yale on Tuesday, "We're not even close to being finished with it yet."

Trump no doubt thinks he's a supergenius for not just denying the seriousness of the coronavirus, but forcing his underlings to echo his nakedly preposterous claims about how it's all over and behind us. This has been commented on to death, but this tendency springs from Trump's history as a reality TV host, which unfortunately reinforced his desire to believe that you can convince people of anything — including that a repeatedly failed businessman is a success — as long as you insist on it loudly enough on camera. But I suspect this tendency goes back further than that, to Trump's career in real estate, where lying about the value of his investments to defraud banks was the backbone of his business model.

But while the Eeyores of Twitter have, in a PTSD-style spiral, convinced themselves Trump is a Machiavellian political mastermind, the reality is that all this over-the-top lying about the coronavirus may be backfiring. It draws even more attention to Trump's failures and reminds people of his sociopathic lack of concern for who gets hurts or even dies in his naked and desperate struggle to hang onto power.

On Wednesday morning, CNN commentator John Berman called the Office of Science and Technology press release "Orwellian" and "laughable," pointing out that "it is the literal opposite of true."

Later in the morning, CNN's Alisyn Camerota confronted Trump campaign flack Hogan Gidley, who was clearly rattled at having to defend such an obnoxious and obvious lie about the pandemic.

First, Gidley tried to pivot by falsely blaming the World Health Organization for the pandemic, but Camerota wouldn't let him wriggle off the hook, insisting he answer her on the question of whether the pandemic has "ended." Then he tried to rationalize this odious lie by claiming the country is "moving in the right direction," which is blatantly untrue, as Camerota pointed out before asking him again if he thinks Trump is telling the truth about the pandemic "ending".

Finally, Gidley cracked and said, "I didn't write the document!"

Trump's loyal supporters certainly don't stick by him because they think he's doing a good job on the pandemic. They're voting for Trump because they harbor bigoted beliefs or because they want to stick it to the liberals, and usually some combination of both. Insofar as Trump voters have fallen into the habit of minimizing the virus, refusing to wear masks or rejecting social distancing, it's out of a misguided loyalty to Trump and an unwillingness to admit that the despised liberals could ever be right about anything, not out of any sincere conviction that things are going well.

But if anyone is wavering on who to vote for — and we had better hope those people exist, as the outcome of the election may depend on them choosing correctly — Trump blatantly lying about something as dangerous as this is not likely to lock down their votes,

None of that matters compared to Trump's black hole of an ego. Ultimately, the real reason the Trump administration and campaign are being so bullheaded in lying about the coronavirus is that Trump, as a terminal narcissist, cannot admit he's failed at anything. These lies and delusions about the pandemic ending aren't as much campaign messaging as Trumpian ego-fluffing, feeding the childish president pretty falsehoods he can use to feel better about himself. That doesn't mean he'll lose — his voters really are that hateful, and ready to turn out to prove it — but it does show that he's less a political supergenius than a moron who lucked into leading a movement of determined bigots.