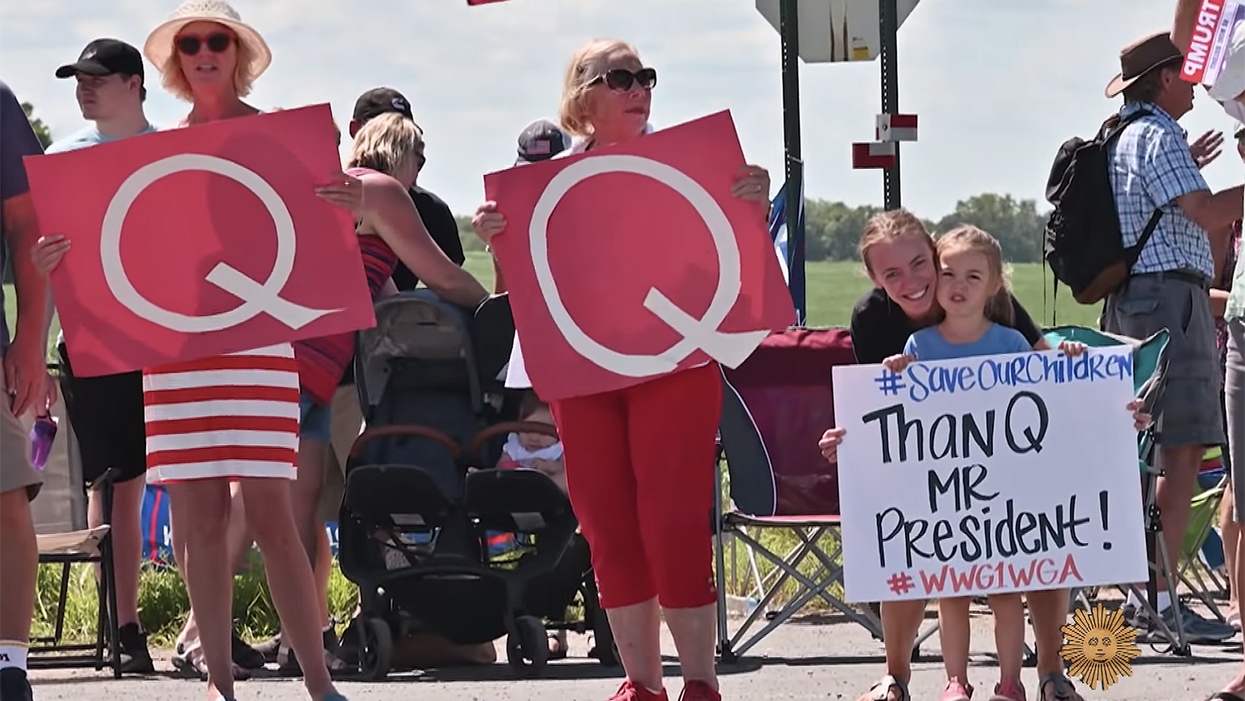 Whenever President Donald Trump is asked about QAnon, he will say a few nice things about the far-right conspiracy theorists while insisting that he doesn't know much about them. It isn't hard to understand why Trump is taking that approach: he wants the votes of QAnon supporters, while keeping some distance from them. In an article published in Axios on October 21, journalists Stef W. Kight and Sara Fischer report that the movement is still "growing" — and that QAnon is being "weaponized to boost President Trump ahead of the election."

Kight and Fischer explain, "What began as a single conspiracy theory linking Hillary Clinton to child trafficking four years ago is now part of a convoluted web of falsehoods being spread to undermine Joe Biden…. In a year of unrest and expected election turmoil, experts are concerned that belief in QAnon could be another instigator of violence in some communities if Trump loses in November."

According to the QAnon conspiracy theory, the federal government of the United States has been infiltrated by an international cabal of child sex traffickers, Satanists and cannibals — and Trump was put in the White House to fight against them. An anonymous figure named Q, members of the cult believe, is providing updates on the president's battle. QAnon members believe that everyone from billionaire Democrat George Soros to R&B superstar Beyoncé is part of the conspiracy, insisting that Beyoncé isn't really African-American but rather, is really an Italian woman and Soros ally named Ann Marie Lastrassi.

But as absurd as QAnon's beliefs are, FBI agents have warned that the movement is dangerous. Kight and Fischer note that security experts are worried about how QAnon will respond if Biden wins the election — and Bryce Webster-Jacobsen, who specializes in cyber-security for GroupSense, says that QAnon's possible response to a Biden victory on November 3 "keeps me up at night."

"Recent reports about what was purported to be Hunter Biden's computer hard drive have sparked renewed activity from Q, with more concrete ideas to latch onto," Kight and Fischer explain. "On the day the New York Post reported on the alleged hard drive, Q posted 16 times, per GroupSense."

"Earlier this year, Donald Trump, Jr. jokingly insinuated that Biden was a pedophile — a nod to QAnon lore that many Democrats use their political power to hide widespread pedophilia," Kight and Fischer note. "Some Republican politicians' adoption of aspects of the theory has helped bring it more mainstream, Webster-Jacobsen said."

Some tech companies have been taking a stand against QAnon.

However, the Axios reporters add that "despite these bans, QAnon followers still find other places online to congregate, like Parler, a far-right social media app."