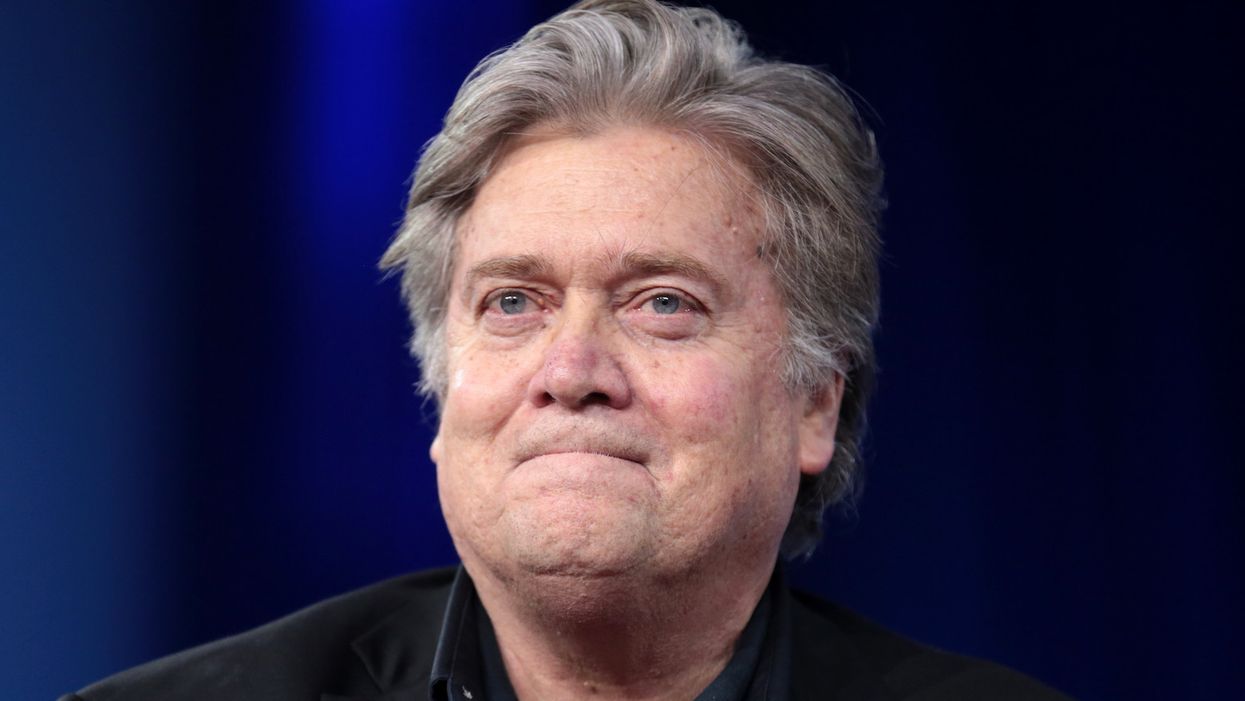 Vice's Emanuel Maiberg is reporting that "a series of videos and photos which appear to show Hunter Biden having sex are going viral on a Chinese-language news and video sharing website" co-founded by Bannon. Maiberg notes that "the videos are often narrated by users in English with a Chinese accent, and claim that the explicit photos and videos of Hunter Biden are proof that he's compromised by the Chinese government."

So far, however, efforts by Bannon and Giuliani to smear Hunter Biden haven't made a difference in the presidential election. And even the far-right Sen. Ted Cruz of Texas told Axios' Jonathan Swan that the e-mails and videos on a hard drive allegedly belonging to the former vice president's son aren't having an impact. Cruz told Swan, "I don't think it moves a single voter."

"Poor Steve Bannon," Peltz writes. "As the Hunter Biden hard drive story is lowered into the grave of failed October surprises, he's run out of options to insert his 'influence' into the election media cycle. Having failed to recreate his media manipulation successes of 2016, the former White House chief strategist is melting down and attacking his would-be allies."

Peltz notes how obsessed Bannon has been with getting Wray fired as FBI director. On October 25 in Axios, Swan and his colleague Alayna Treene reported that Trump, according to sources, plans to fire Wray as well as CIA Director Gina Haspel and Defense Secretary Mark Esper if he is reelected. But as Bannon sees it, Trumpworld isn't going after Wray aggressively enough — and he wants to see Wray fired right away, not after the election.

"In the past few days," according to Pentz, Bannon has "lambasted Trump lawyer Rudy Giuliani, Attorney General William Barr and even Donald Trump himself — calling them 'weak' for not pushing for, or bringing about, the immediate firing of FBI Director Christopher Wray."

Trump has clearly been increasing angry with Wray in recent months, stemming from disagreements over multiple issues. Most notably, Trump is outraged that Wray hasn't gone after the president's political enemies, has emphasized the serious threats of right-wing violence and white supremacy, diminished the significance of antifa and left-wing violence, and failed to provide support for Republicans' attacks on the integrity of mail-in voting.

The contents of a hard drive that supposedly belonged to Hunter Biden were first reported by the New York Post, and Bannon and Giuliani collaborated on that story. But Bannon, according to Peltz, has lashed out at Giuliani for not being hard enough on Wray.

"On October 29," Peltz reports, "Bannon attacked Giuliani even though they've been working together to launder the bogus story that first appeared in the New York Post, calling him 'one of the weak guys around' Trump."

In a transcript of that October 29 conversation, according to Peltz, Bannon declared, "Wray must be fired this morning" — and Giuliani agreed with firing Wray, but not until after the election. Bannon, in response, told Giuliani, "You're one of the weak guys around him. You're getting weak on me, Rudy. No, you're weak. You sort of sound like Chris; you spent too much time with Chris Christie. You're getting weak."

Bannon also slammed Barr as "another weak link in this chain."

In an October 29 broadcast of "War Room," Bannon ranted against Wray as well as Trump allies who he believes haven't done enough to get him fired.

"Fire him today," Bannon declared. "Do not wait. You show weakness — the president is showing weakness by waiting. There's not one person in this country, not one voter that will not vote for you by firing Wray. And don't let the weak people around you convince you of that. Be strong, be who you are, be what your presidency is about."