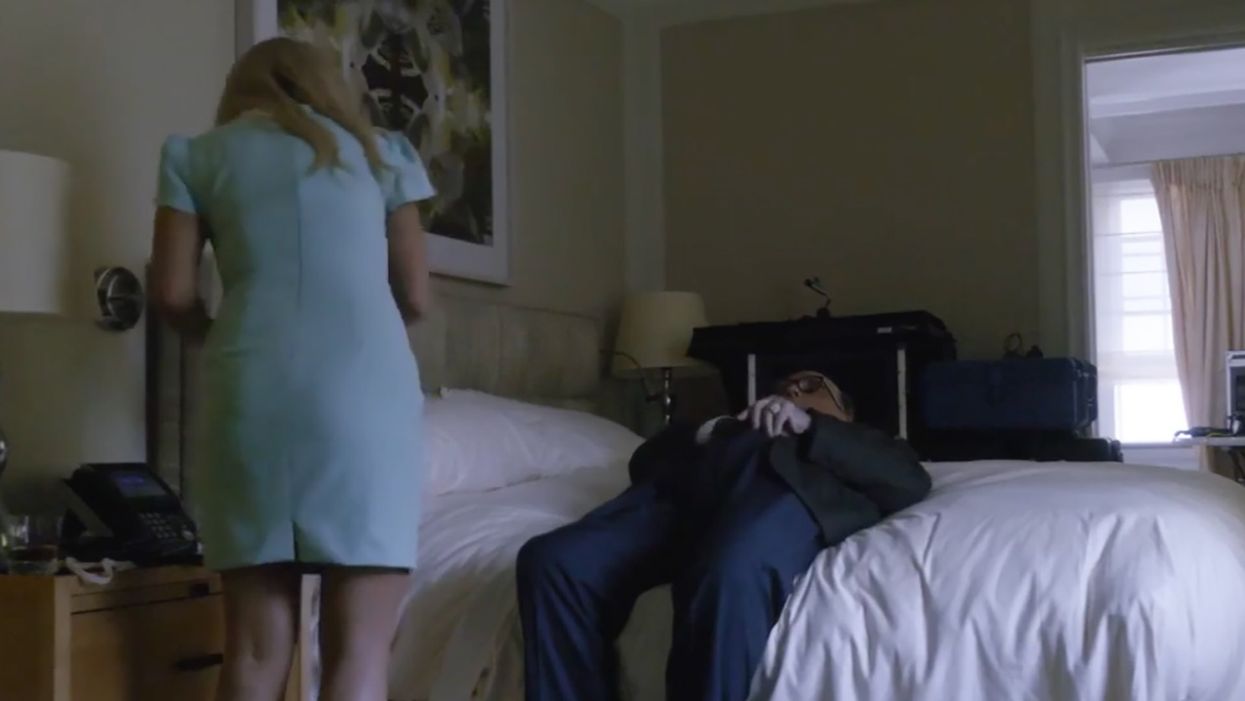 Former LifeLock spokesperson Rudy Giuliani is defending his unwitting cameo in the "Borat" sequel as a "hit job" in retaliation for his recent smears on Democratic nominee Joe Biden's son, Hunter.

In the controversial appearance, the man once called "America's Mayor" appears to be touching himself under his pants while on a hotel bed beside an actress posing as a young journalist.

After news of the scene first broke on Wednesday, the former New York mayor called in to radio station WABC to explain that he had merely been tucking in his shirt. Giuliani suggested that the scene might have been "added, doctored, [or] manipulated" — allegations which he denies about his own dubious accusations against Biden.

"I had to take off the electronic equipment," the former assistant U.S. attorney claimed. "And when the electronic equipment came off, some of it was in the back. And my shirt came a little out, although my clothes were entirely on. I leaned back, and I tucked my shirt in. And at that point — at that point, they have this picture they take which looks doctored. But, in any event, I'm tucking my shirt in. I assure you that's all I was doing."

In the sequel to the hit mockumentary, 24-year-old actress Maria Balakova, who poses as Borat's teenage daughter, Tutar, scores a one-on-one sit-down with Giuliani in a Manhattan hotel suite. According to Giuliani — whose work representing President Donald Trump's personal interests in Ukraine led directly to his own client's impeachment — he entered into what "seemed like a legitimate interview" with a "young woman."

"At one point, she explained to me some problems she had. I actually prayed with her," he said. "And then, I had to leave. I had my jacket on. I was fully clothed at all times."

However, that description omitted some relevant details.

Throughout the scene, "Tutar" flirts heavily with Giuliani, and she reaches out to touch his knee several times. At one point, after Giuliani blames China for the coronavirus pandemic, he agrees to eat a bat with her.

After Sacha Baron Cohen, in the role of Borat, interrupts the interview costumed as an audio tech to "save" his daughter, the scene cuts to Tutar inviting Giuliani to "have a drink in the bedroom." Giuliani, whom U.S. officials reportedly warned the White House had been a target of Russian intelligence, follows her out.

The next scene appears to be captured on hidden cameras. Giuliani, the president's former informal cybersecurity adviser, removes Tutar's microphone, sits on the bed and asks for her address and phone number. She removes his microphone, touching his pants, and he pats her backside. Giuliani then lies back on the bed and puts his hands down his pants for longer than he suggested in his later radio interview.

At that point, Borat, dressed in pink neglige which Giuliani later described as a "pink transgender outfit," bursts into the room. Borat screams, "Put down your chram!" — his word for penis. "She's 15! She's too old for you!"

Giuliani, who had been given no information about the woman's age, attempts to leave as quickly as possible. He is hounded by Borat, who shouts after him, "Rudy, Trump will be disappoint! You are leaving hotel without golden shower!"

After Wednesday's radio spot, Giuliani posted a series tweets in his defense, attacking Baron Cohen, the film's star and director, as a "stone-cold liar."

"The Borat video is a complete fabrication. I was tucking in my shirt after taking off the recording equipment," Giuliani wrote. "At no time before, during, or after the interview was I ever inappropriate. If Sacha Baron Cohen implies otherwise he is a stone-cold liar."

"In fact, the NY Post today reports 'it looks to me like an exaggeration through editing,'" he continued, citing a review from the Rupert Murdoch-owned tabloid — an echo of his allegation of possible "doctored" footage, which he floated in his radio interview.

"Now let me tell you why I know this is a hit job that happens because, it's not an accident that it happens that I turn in all this evidence on their prince and darling Joe Biden who's one of the biggest crooks in the last thirty years, and since I have the courage to say that I'm the target," Giuliani added, neglecting to mention that the scene was filmed in July.

In July, Giuliani told The New York Post — the same outlet he recently handed what he claimed were Hunter Biden's emails — that he had called the police after he left the hotel. When pressed later that month in a WABC radio interview about whether he did anything "regretful," Giuliani replied, "I don't think so. I'm trying to remember."

The movie, "Borat Subsequent Moviefilm," will be released Friday on Amazon Prime.