Florida Gov. DeSantis is pushing a last desperate gambit to remove felons from the voter rolls 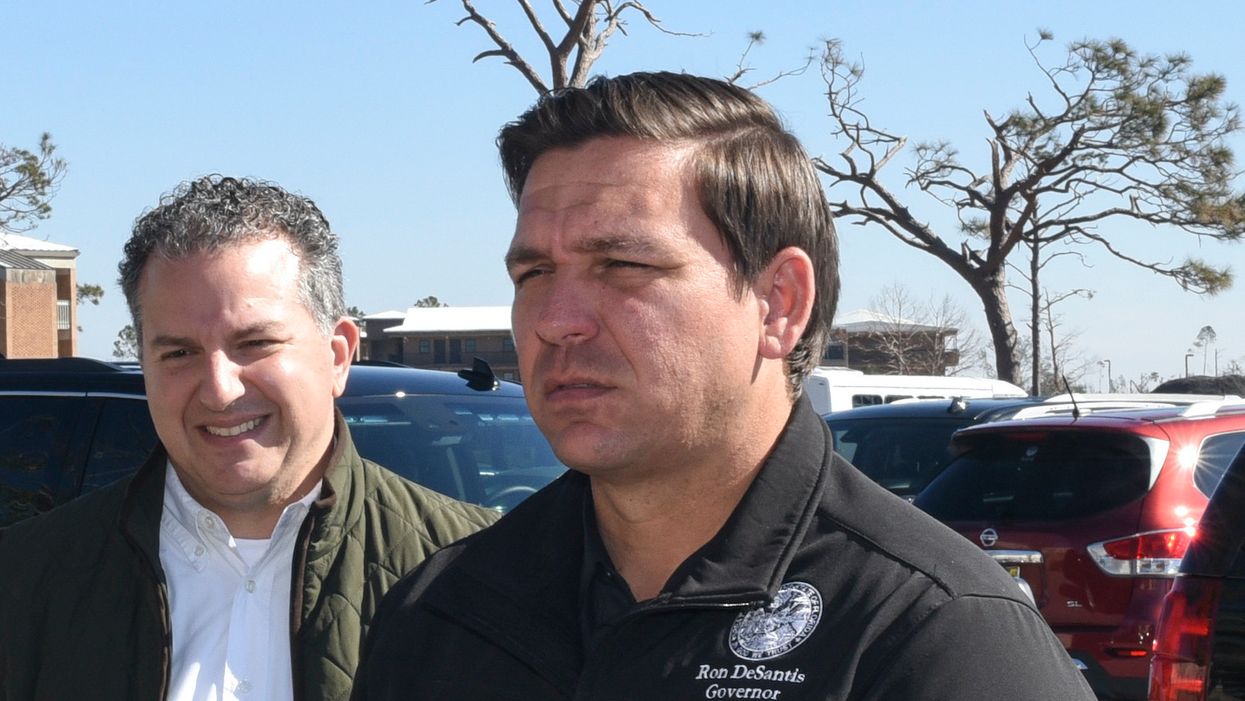 Florida Gov. Ron DeSantis, right, speaks with members of Tyndall Air Force Base, Fla., leadership during the governor's first visit to the base since becoming governor, Jan. 16, 2019. After an early lunch meeting, DeSantis joined leadership on a windshield tour of the base to view recovery and reconstruction efforts after Hurricane Michael, a category 4 hurricane that made landfall over Tyndall Oct. 10, 2018. (U.S. Air Force photo by Airman 1st Class Solomon Cook)
Alex Henderson
October 20, 2020

In Florida, the administration of far-right Republican Gov. Ron DeSantis is drawing criticism from members of the American Civil Liberties Union and other organizations for urging local election officials to remove convicted felons from the voter rolls if they have any unpaid fees or fines.

Anton Marino, deputy legal director of the Florida ACLU, told the Washington Post that the move "looks like an additional effort by the state to intimidate otherwise eligible voters."

Last week, Maria Matthews, director of the Florida Division of Elections, encouraged local election officials to remove anyone from the rolls if they had a felony conviction and still owed any fees or fines that they hadn't paid. And a separate memo from Florida Secretary of State Laurel M. Lee's general counsel urged election staff or law enforcement officers to guard all drop boxes for mail-in voting ballots. Lee, in an official statement, said her office has a duty to identify people who are ineligible to vote and stressed, "The law with respect to legal financial obligations is now clear."

Patricia Brigham, president of the Florida League of Women Voters, told the Post, "They're attempting to sow confusion…. The State of Florida doesn't have a spotless record when it comes to making sure voters have easy access to the polls."

In 2018, Florida voters passed a constitutional amendment that automatically restored the voting rights of convicted felons after their incarceration. But Republicans in the Florida state legislature later passed a law saying that voting rights for Floridians with felony convictions could not be restored until they had paid all fees or fines that they owed — a move that Florida Democrats have attacked as voter suppression and compared to a poll tax.

Florida, which has 29 electoral votes, is among the swing states that reporters will be paying especially close attention to between now and November 3. Polls released this month have been showing the presidential race to be very close in the Sunshine State, where former Vice President Joe Biden has had mostly narrow single-digit leads over President Donald Trump. According to recent polls, Trump is trailing Biden by only 1% (University of North Florida), 2% (St. Pete Polls and Reuters/Ipsos) or 3% (Emerson College).