Here's why Republicans are so obsessed with Amy Coney Barrett's kids 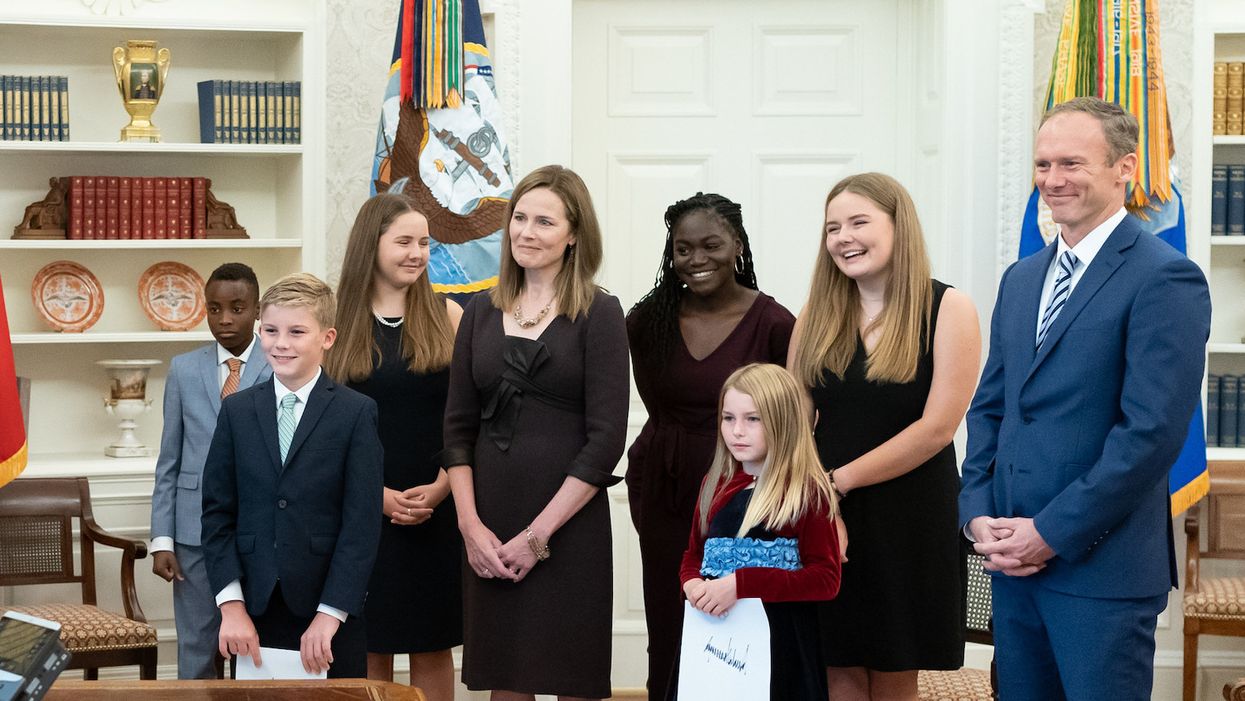 Hey, folks, did you know that Amy Coney Barrett, Donald Trump's nominee to fill Justice Ruth Bader Ginsburg's seat on the Supreme Court, has a lot of kids?

If not, good on you for not watching a single second of the first day of the farce playing out in the Senate chambers this week, as Republicans — who previously claimed that Barack Obama had no right to fill a Supreme Court seat a full seven months before a presidential election — rush to cram Barrett onto the court only days before the next one. Anyone who tuned in, or who simply flipped through C-SPAN on their way to watch something else, heard Republicans on the Senate Judiciary Committee talk glowingly about Barrett's family — she has seven children, two of them adopted — as if it was were a miracle sent directly from heaven.

Sen. Mike Lee of Utah, proving he's not "pro-life" by going mask-free despite his COVID-19 diagnosis, raved about how Barrett was "the oldest of seven children" before having seven kids of her own, offering the opinion that maternal "responsibilities have undoubtedly helped you throughout life."

Sen. Joni Ernst of Iowa falsely declared that Democrats are "attacking you as a mom and a woman of faith." (This is repeatedly claimed by Republicans, but I remain unaware of any Democrat who has attacked Barrett on either count.)

"I bet there's many young women, like my own two daughters, who marvel at the balance that you've achieved between your personal and professional life," said Sen. John Cornyn of Texas. That distinguished gentleman — now facing an unexpectedly tight re-election battle against Democrat MJ Hegar — failed to note that Barrett has a net worth of $2.6 million, a $200,000 salary as a professor at Notre Dame and a husband who is a partner at a prestigious law firm. So the answer would seem to be that Barrett's family can afford to hire lots of child care while she pursues her professional goals.

And so on and so forth. Republicans were way more interested in Barrett's accomplishments as a producer and adopter of children than in her legal résumé. Part of that is because Republicans would rather talk about anything other than Barrett's legal record, since they don't want the public to know about her opposition to the Affordable Care Act, her desire to end legal abortion and strip women of contraception access or her association with anti-LGBTQ groups.

But this is also just about trolling feminists. The implicit argument in hyping Barrett's big family along with her successful career is one that anti-choice activists have been making for a long time: Women don't really need contraception or abortion access in order to succeed socially and professionally, and feminists who say otherwise have a sinister agenda.

Indeed, the longstanding claim of the religious right is that feminists aren't really pro-woman at all, but are in fact working on behalf of sleazy men who want to exploit women for their bodies. In this narrative, women do not actually enjoy sex, but instead use it solely as a tool to secure a breadwinning mate and a big brood of kids. Feminists who support abortion rights and widespread access to birth control are luring women away from their true natures for the benefit of horndog men."

Women experiencing an unplanned pregnancy also deserve unplanned joy," a famous quotation from anti-choice activist Patricia Heaton, has been adopted as the motto for this mentality.

"[S]exual equality is found not in imitating men's capacity to walk away from an unexpected pregnancy through abortion, but rather in asking men to meet women at a high standard of mutual responsibility, reciprocity and care," anti-choice activist Erika Bachiochi wrote at Politico, defending Barrett's nomination.

Feminism, according to conservative New York Times columnist Ross Douthat, has stolen away "sex and romance and marriage and child-rearing" from women, and "conservative feminism" of the Barrett variety is about restoring those things. (He elides the fact that the plan is to restore such things by force by making alternatives illegal or unavailable.)

In this deranged worldview, any woman who says she doesn't want to get pregnant is assumed to be suffering from false consciousness. The possibility that women desire sex for reasons other than trapping a man in a domestic partnership and making a bunch of babies is treated as preposterous. Women who insist that they actually want other things are treated with pity and condescension, as if they don't know their own minds.

People who make these arguments tend to call themselves "feminists for life" or "conservative feminists." But there's nothing feminist about any of this, since it all rests on the view that women are too stupid and too easily misled to be permitted control over their own bodies.

All this patronizing rhetoric, to be clear, is just a churchy cover for deeply-rooted sadism and misogyny.

Anti-choicers know full well the misery that springs from their preferred policies. They know women may die or suffer serious injuries from illegal abortions. They know that families who have more children than they can care for suffer from poverty. They know that giving children up for adoption is usually heartbreaking. They know that shotgun marriages are often unhappy and one big reason divorce rates were much higher in the past. They know that most women simply don't have Barrett's resources to hire other people to care for their children so they can pursue their career ambitions.

But that's the point: All that misery is viewed as just punishment for women who want sexual freedom and equality. But conservatives also know that the public is repulsed by open displays of sadism and hatred, so instead we get this pursed-lip, praying-for-you condescension, clad in pseudo-feminist drag.

Trolling feminists is joyful in itself for many leading Republicans, but there's another reason for the Barrett baby parade: Distracting their own voters from how radical her right-wing worldview really is.

Barrett's policy positions and her likely future judgments are deeply unpopular with Americans, including many Republicans. For instance, 72% of voters — and 62% of Republicans — want the federal government to protect insurance coverage for people with pre-existing conditions. Barrett is expected to end that if she is seated on the court in time to hear an upcoming case meant to kill off the Affordable Care Act. On abortion, 66% of Americans, and 47% of Republicans, believe that Roe v. Wade should be left alone. Barrett is expected to be part of a conservative majority that will eventually vote to overturn it. A whopping 92% of Americans believe birth control is morally acceptable, and are likely to take a dim view of a letter Barrett signed claiming it was "morally obtuse" to require insurance companies to cover contraception.

By parading around Barrett's large family and pretending that feminists are "attacking" her for having a lot of children — when what feminists really oppose is forcing childbirth on the unwilling — Republicans can turn this confirmation into yet another culture-war conflict instead of a dispute about the issues. Now their voters are all riled up about an imaginary liberal assaults on faith and family, instead of perceiving that Barrett is there to assault both their religious and sexual freedoms.

There were many conservative judges Republicans could have picked to dismantle the ACA and reproductive rights. They went with an anti-choice fanatic with seven kids to taunt feminists with the implication that only weak and stupid women need birth control and abortion. The hope is that their own voters will be so ecstatic over "triggering" feminists that they won't notice that their own rights and health care are being stripped away too. Feminist tears won't pay for anyone's health insurance, but by the time Republican voters realize that, it will be too late.