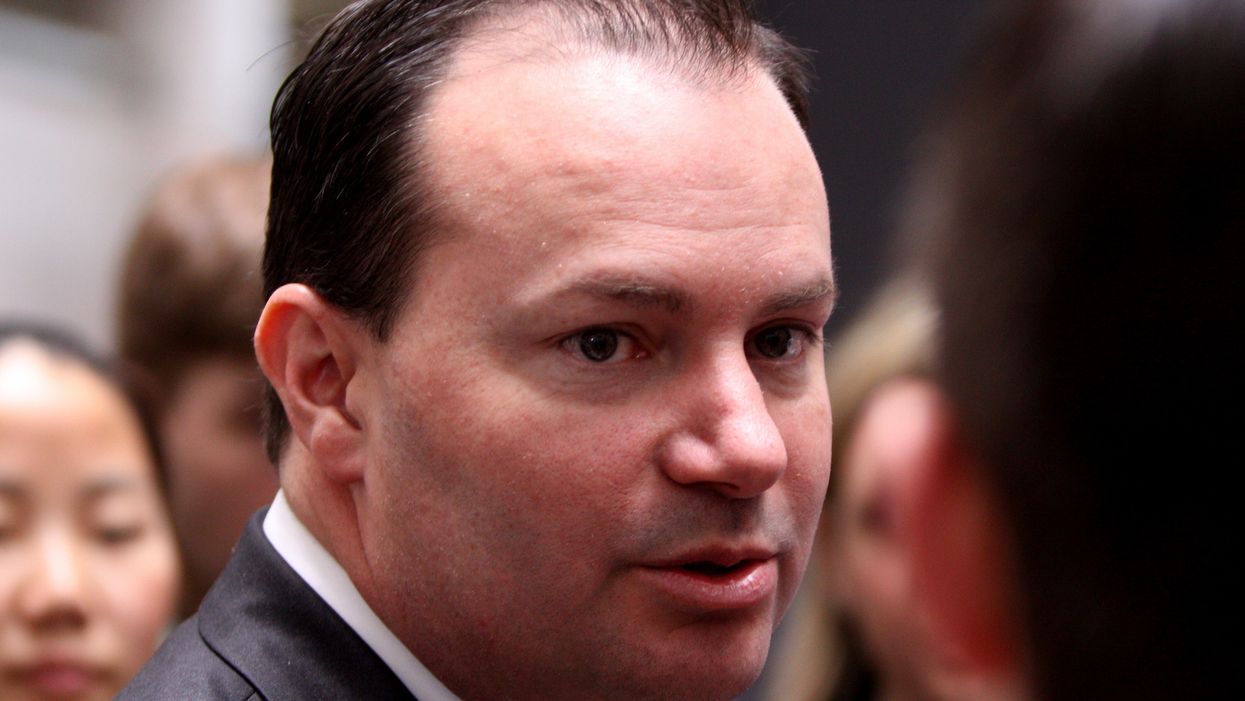 Republican Sen. Mike Lee of Utah sparked a backlash this week when made an undercurrent of the modern conservative movement and the driving ideology of the Republican Party explicit.

Twitter's not exactly known for the capacity to have in-depth discussions on political philosophy, but Lee hadn't even come close to using up his 280 characters. After significant outrage stirred by his first tweet, Lee expanded on the idea the following day with a slightly longer message.

"Democracy isn't the objective; liberty, peace, and [prosperity] are," he wrote. "We want the human condition to flourish. Rank democracy can thwart that."

Again, it was a striking sentiment, and it inflamed critics who have accused the Lee and the GOP of systematically trying to disenfranchise constituencies they believe won't vote for Republicans. But Lee didn't back down. He went to the conservative outlet the Washington Examiner, which essentially transcribed his own defense of his claims with little analysis or reflection. He shared a piece from DeseretNews, which offered a more balanced take on the controversy. And Conn Carroll, a spokesperson for Lee, provided a statement to Vox further defending the comments:

At a time when Democrats want to pack the Court, eliminate the Electoral College, and turn the Senate into the House, it is very good that Americans are re-reading The Federalist Papers to rediscover why the founders put these specific republican checks on democratic passion into the Constitution.

But none of the defenses could shield from the fact that the senator's sentiments reflect a growing and dangerous anti-democratic element on the modern right-wing. The instinct has always been there, in some form or another, but you would nevertheless hear Republicans pay lip-service to the idea of democracy. Cynically, though, they began pushing extremely anti-democratic policies, such as restrictive voter ID laws and racial gerrymandering meant to dilute the votes of minorities and Democrats. They offered pro-forma excuses for these policies, such as voting the virtually non-existent problem of voter fraud, but many surely knew that they were just taking whatever advantage they could to keep power.

Lee's remarks, however, show how those cynical power grabs can merge with an ideology that is intrinsically elitist and whose adherents know it's deeply unpopular. This creates a strong incentive to rationalize opposition to democracy and justify restricting the influence of ordinary citizens on the government. The Utah senator's willingness to be openly dismissive of democracy may signal that his party will be increasingly willing to not even espouse traditional democratic values. This isn't likely to be a popular stance, but if they get their way, that won't matter.

Republicans, after all, already know they need to distort the playing field win and rule. That's why they concoct bizarre and ad hoc excuses for preserving the Electoral College, despite the fact that it was a ham-fisted compromise at the country's founding that has served to put the more unpopular candidate in the White House twice in living memory. That's why they're thrilled to appoint conservative Judge Amy Coney Barrett to the Supreme Court, breaking the countless promises they made to leave seats open during a presidential campaign and rushing the process in the weeks before an election. They want their 6-3 conservative court, which can theoretically stand in the way of Democratic majorities in Congress and a Democratic president from enacting a popular agenda.

Loren Culp, Republican candidate for Washington Governor, articulated the objection to democracy in a recent video:

GOP nominee @LorenCulp to @KATUNews: “The problem with Democracy — you can look at quotes from famous Chinese lea… https://t.co/aOO0QfBxn6
— James Singer (@James Singer)1601749258.0

This is exactly the point. Republicans fear that, if the people are adequately represented in government, the government will have to do things they like, such as providing for basic needs like health care and housing. They deride providing such services as "socialism," which the Republican mind cannot abide.

In a recent column, the New York Times' Jamelle Bouie dispelled the frequently touted nonsense that the United States isn't a "democracy" but a "republic":

For the founders, "democracy" did not mean majority rule in a system of representation. The men who led the revolution and devised the Constitution were immersed in classical literature and political theory. Ancient Greece, in particular, was a cautionary tale. When James Madison critiqued "democracy" in Federalist No. 10, he meant the Athenian sort: "a society consisting of a small number of citizens, who assemble and administer the government in person." This he contrasted with a "republic" or "a government in which the scheme of representation takes place." Likewise, in a 1788 speech to the New York ratification convention, Alexander Hamilton disavowed "the ancient democracies in which the people themselves deliberated." They "never possessed one good feature of government," he said. "Their very character was tyranny; their figure deformity."

In more modern terms, the founders feared "direct democracy" and accounted for its dangers with a system of "representative democracy." Yes, this "republic" had counter-majoritarian aspects, like equal representation of states in the Senate, the presidential veto and the Supreme Court. But it was not designed for minority rule.

If there's substance behind "We're a republic, not a democracy," it's not as a description of American government. There's really no difference, in the present, between a "republic" and a "democracy": Both connote systems of representation in which sovereignty and authority derive from the public at large.

The point of the slogan isn't to describe who we are, but to claim and co-opt the founding for right-wing politics — to naturalize political inequality and make it the proper order of things. What lies behind that quip, in other words, is an impulse against democratic representation. It is part and parcel of the drive to make American government a closed domain for a select, privileged few.

The anti-democratic impulse is commonplace on the right. GOP Chair Ronna McDaniel, for example, celebrated on Thursday a series of court rulings that make it harder for the American people to vote:

Meanwhile, Trump has explicitly said he thinks he needs Barrett to be approved by the Senate because he expects the Supreme Court to determine the result of the November election. He's not satisfied with simply competing in the Electoral College which, at least in 2016, was tilted in his favor. He's run a months-long disinformation campaign attacking mail-in voting, claiming the election will be rigged, and demanding that his supporters become poll-watchers — likely as an attempt to intimidate Democrats who want to cast ballots. He wants chaos, and then he wants his hand-picked justices to hand him the election, regardless of the will of the people.

"Now, we may have litigation about who won the election, but the court will decide," he said last month. "And, if the Republicans lose, we will accept that result. But we need a full court, and I think that's possible before the election."

So it should be clear that it's not just a Trump phenomenon. Republicans are committed to limiting the power of the voters to keep their hold on power. And in turn, the fact that Republicans need to persuade a minority of the country to win allows them to become more radicalized, thus pushing them to dilute voters' power even more.

And since gutting the Voting Rights Act, the conservative-dominated Supreme Court has repeatedly declined to act to preserve voting rights or increase access to the ballot. With Barrett on the bench, that attitude is almost certain to be further entrenched.