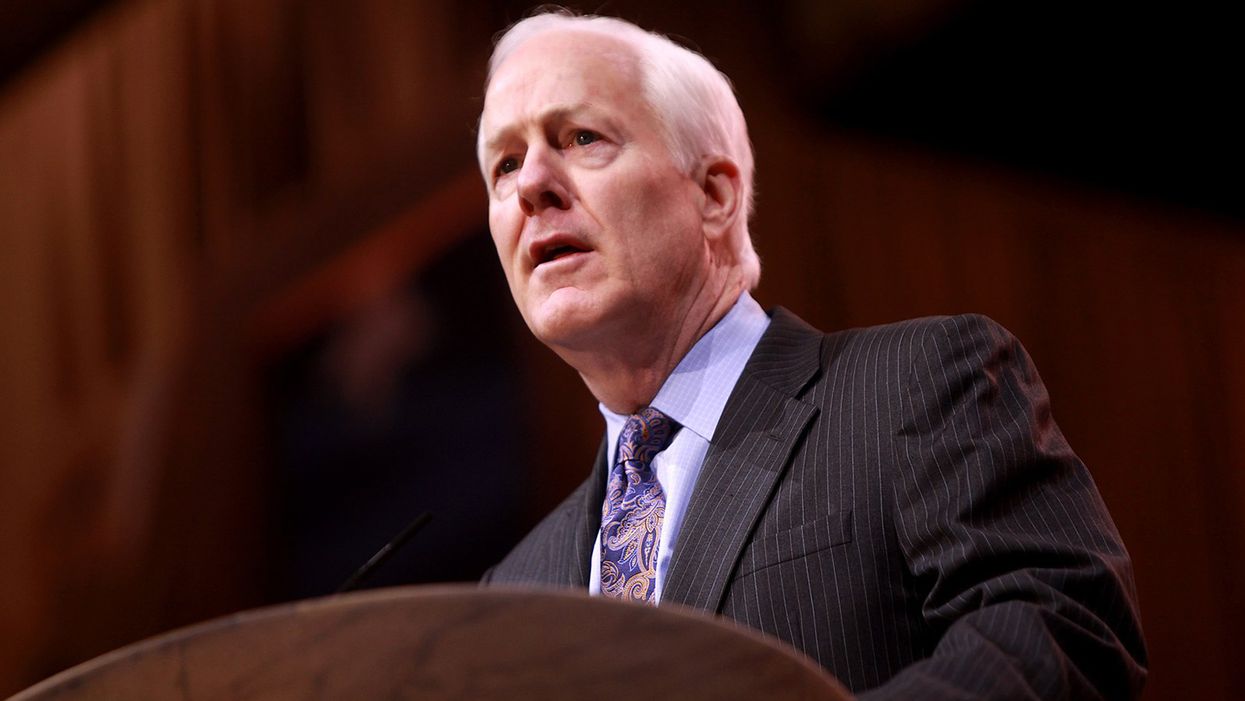 The final two weeks of the 2020 election are upon us, and with the political climate continuing to favor Democrats overall, Daily Kos Elections is moving our race ratings in 11 more contests—nine shift to the left, while two move towards the GOP. We also now have a total of 11 GOP-held Senate seats rated as Lean Republican or better for Democrats. You can find all our Senate, gubernatorial, and House ratings at each link.

• TX-Sen (Likely R to Lean R): Democrat MJ Hegar not only swamped Republican Sen. John Cornyn 2:1 in fundraising over the last quarter, she just got a big vote of confidence from the Senate Majority PAC, which announced it would invest almost $9 million to support her bid—the first time outside Democratic groups have spent money on a Texas Senate race in forever. (Yep, even Beto didn't get that kind of love.)

All polls still have Cornyn ahead, and Texas is still Texas. But the gap has narrowed, and with presidential polling showing a near-tie, the once unthinkable is now a whole lot more thinkable. Cornyn himself also seems to be feeling the heat: After spending four years positioning himself as nothing but an ardent Trump ally, the senator insisted to reporters over the weekend that he'd disagreed with the White House plenty of times but kept his dissent private.

• CO-Sen (Lean D to Likely D): With reports that the National Republican Senatorial Committee (NRSC) and the Senate Leadership Fund have both drastically scaled back their spending in Colorado's Senate race, Republicans have now all but abandoned Cory Gardner. Confirming the development, the top Democratic super PAC, Senate Majority PAC, has also cut seven figures from its planned advertising. Every single poll of this race has shown Gardner trailing Democrat John Hickenlooper, most by double digits. At this point, Colorado is simply too blue for a Republican with no real ability to distance himself from Donald Trump—like Gardner.

• VT-Gov (Likely R to Safe R): Despite Vermont's deep blue hue, the state has continued its long history of electing Republican governors, and Phil Scott has remained exceedingly popular, in part because of his handling of the coronavirus pandemic. Limited polling has shown him crushing his Democratic opponent, Lt. Gov. David Zuckerman, and there's been no indication that outside groups plan to get involved here in the final weeks.

• CA-21 (Lean D to Tossup): Democrat TJ Cox narrowly unseated Republican Rep. David Valadao in one of the biggest upsets of 2018, and he faces a difficult campaign to stop Valadao from reclaiming California's 21st Congressional District this year.

The only recent poll we've seen out of this southern Central Valley seat was a mid-September American Viewpoint internal for the pro-Republican Congressional Leadership Fund that found Valadao ahead 49-38. It may seem implausible that Valadao could have a huge lead in a district that Trump lost 55-40, but Democrats have not responded with better numbers, and Politico also recently reported that this was one of only a few seats that Team Blue is "growing increasingly nervous" about.

There are some other factors that could complicate Cox's chances even in a good year for his party. National polls show Trump running better with Latino voters than he did four years ago, which could help him make up some ground in this heavily Latino district. And Valadao has always run ahead of the GOP ticket in past years, sometimes quite dramatically. Cox may still be the slight favorite to hang on, but a Valadao win would no longer be a surprise.

A mid-September survey from St. Pete Polls found Mast ahead by a wide—but not insurmountable—50-42 margin even as respondents narrowly favored Biden in a district that had backed Trump 53-44 four years earlier. An early October Keith internal from Clearview Research then showed her ahead 45-43, and Mast's allies haven't responded with alternate numbers. There has been no notable outside spending so far in this seat, which includes the Palm Beach area and the Treasure Coast to the north, but an upset is possible if Nov. 3 is a strong night for Team Blue.

• IL-13 (Lean R to Tossup): We had thought that Betsy Dirksen Londrigan's near-miss against Republican Rep. Rodney Davis in 2018 might have been a high-water mark for Democrats in central Illinois' 13th Congressional District, which isn't necessarily the most favorable sort of turf from Team Blue. But a recent survey for the Democratic Congressional Campaign Committee (DCCC) found her leading Davis by five points in her rematch after prior polls showed the race neck-and-neck, and we haven't seen any sort of GOP response.

The D-Trip has backed up its data with hard dollars: Along with the House Majority PAC, they've matched spending with the big outside Republican groups. This one is looking very close once again.

• MI-03 (Likely R to Lean R): Michigan's 3rd Congressional District hasn't been competitive in a general election in some time, but outside groups from both parties are spending serious amounts of money in the contest to succeed Republican-turned-independent-turned-Libertarian Rep. Justin Amash, who is retiring after a tumultuous career.

The few polls we've seen have shown an unsettled contest in this Grand Rapids-based seat between Democrat Hillary Scholten, an immigration attorney, and Republican Peter Meijer, whose family owns an eponymous retail chain with almost 200 locations. A mid-September internal from Global Strategy Group for Scholten's allies at House Majority PAC showed a 41-41 tie as Biden led 49-41 in a district that backed Trump 52-42 in 2016; weeks later, the Democratic nominee released numbers from ALG Research that had her ahead 44-42. Meijer did get better news, though, when a late September survey from the conservative firm We Ask America had him leading 48-41 as Biden and Trump deadlocked 47-47.

This seat is still red enough that Meijer remains the frontrunner, but Scholten's chances are as strong as they've ever been.

• NC-08 (Likely R to Lean R): While Republican Rep. Richard Hudson is still the favorite against Democrat Pat Timmons-Goodson, a former justice on the state Supreme Court, major outside groups on both sides have begun spending serious amounts of money late in the contest for North Carolina's 8th Congressional District.

The only two polls we've seen in recent weeks have both come from Democrats, and they've each shown a close race. A late September internal from Brilliant Corners for Timmons-Goodson showed Hudson up 44-42 as Trump led only 47-44 in a seat he took 53-44 four years ago. An early October DCCC Analytics poll was even more favorable: It found Timmons-Goodson and Biden up 42-39 and 47-43, respectively. Republicans have yet to release contradictory numbers.

There's also one other factor that could complicate Hudson's path in this seat, which includes Fayetteville and some of Charlotte's suburbs: Because of court-supervised redistricting, the Republican is seeking reelection in a seat where a quarter of all residents are new to him, which could prevent him from enjoying the full benefits of incumbency.

• SC-01 (Tossup to Lean D): Freshman Democratic Rep. Joe Cunningham won South Carolina's coastal 1st Congressional District in one of the bigger upsets of 2018, but he's the frontrunner going into the final weeks of his bid for reelection.

Major outside groups on both sides are still spending heavily here, and a Mace win is still very possible, but Cunningham, for perhaps the first time in his political career, is the favorite.

• TX-32 (Lean D to Likely D): Freshman Democratic Rep. Colin Allred flipped Texas' 32nd District after a very expensive 2018 battle, but it will be hard for businesswoman Genevieve Collins to reclaim it for her party.

This historically red suburban North Dallas seat swung from 57-41 Romney to 49-47 Clinton, and diverse and well-educated constituencies like this have only become more hostile to the GOP over the last four years. Major outside groups also aren't acting like this will be close: While both parties are pouring millions into the neighboring 24th District, they've steered clear of this race so far. Collins still has the resources to run a credible campaign on her own, but it would be a big surprise if she emerged victorious.

• WA-03 (Likely R to Lean R): Republican Rep. Jaime Herrera Beutler is still the frontrunner against Democrat Carolyn Long, whom she defeated 53-47 in 2018, but their rematch for southern Washington's 3rd Congressional District has been looking more competitive recently.

In late September, Long released an internal from GQR that found Herrera Beutler up 49-47 as Trump led just 48-47 in a district he took 50-43 in 2016. That's the only survey we've seen here in some time, but major outside groups are acting like this seat is very much in play. The National Republican Congressional Committee and Congressional Leadership Fund went on the air on Oct. 13 to aid the congresswoman, the very same day the DCCC released its first anti-Herrera Beutler ads. Altogether, national GOP groups spent almost $900,000 during the week of Oct. 12, while the DCCC dropped $470,000 during that time.

Herrera Beutler still has the advantage, though, in this conservative seat. The incumbent pulled off a healthy win last cycle, and even Democratic Sen. Maria Cantwell narrowly lost the 3rd District 51-49 that year while she was winning statewide in a 58-42 landslide. However, if 2020 turns out to be a stronger year for Team Blue than 2018 was, Long will have an opportunity to notch an upset.