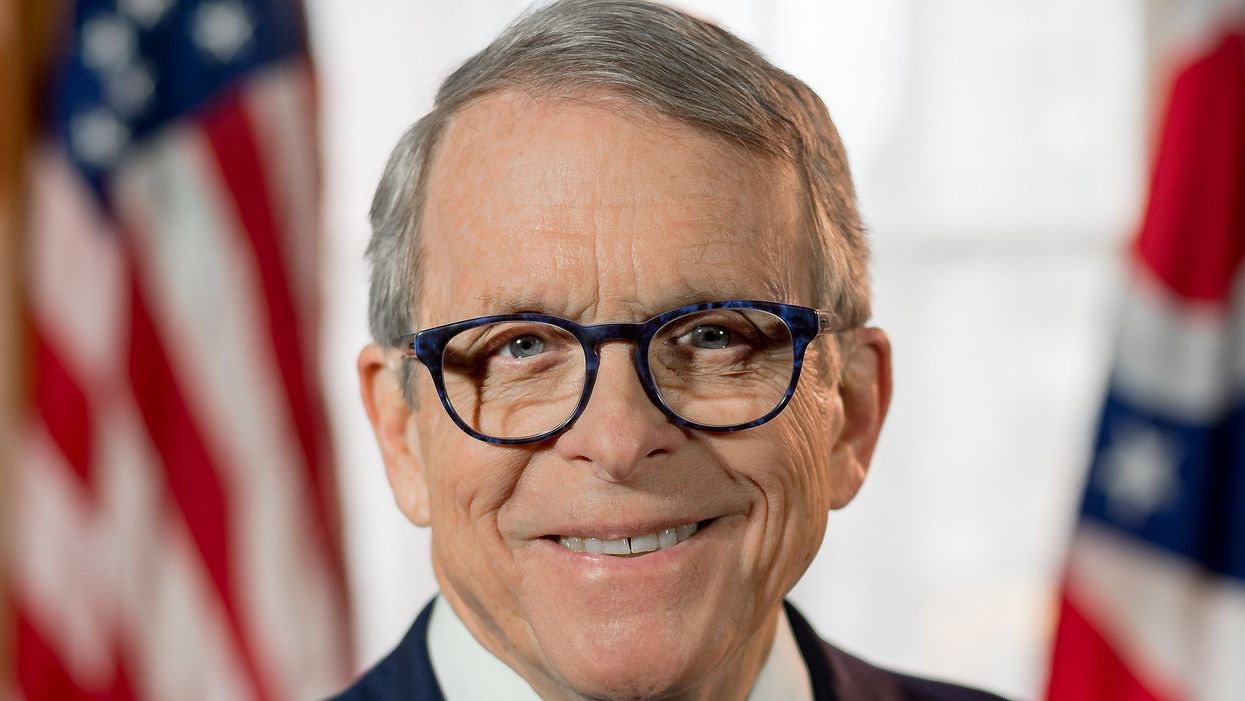 Renea Turner protested Ohio Gov. Mike DeWine's COVID-19 orders earlier this summer, and this week declared she was making a citizen's arrest, but denies plotting to kidnap him.

Citizen's arrests are all the rage among right-wing extremists these days, it seems. Barely two weeks after 14 Michigan militiamen were arrested as part of a plot to kidnap Gov. Gretchen Whitmer under the rubric of a "constitutionalist" fantasy, a similar plot to make a "citizen's arrest" of Ohio Gov. Mike DeWine—accused similarly of "tyranny" by imposing coronavirus-related health measures—bubbled to the surface this week.

The alleged Ohio plot revolves around a fringe-right activist named Renea Turner, who ran a write-in campaign for governor in 2018. A man who worked with her told police that Turner had attempted to join her plan to perform a citizen's arrest of DeWine at his home—which he claims involved then trying him for treason and punishing him accordingly.

On Thursday, Turner conducted a ceremony in Columbus (posted as a since-deleted video on Facebook) in which she announced that she was deposing DeWine as governor, and took the gubernatorial oath to replace him. On Monday, she held a press conference in which she denied she intended to harm DeWine—she merely intended to serve him with citizen's arrest papers, she said.

The idea of using citizen's arrest powers against government officials engaged in the far right's conception of "treason" and "tyranny" has its origins in the "Patriot" militia movement's activism in the 1990s. It was a common strategy for so-called "constitutionalists" and "sovereign citizens" to file reams of documents containing flowery pseudo-legal language to claim that various government officials—including judges, prosecutors, and elected authorities—had betrayed their oaths of office and thus committed treason.

Some, such as the Freemen in eastern Montana, issued bounties of $1 million for the arrest of various public officials on charges of treason. These tactics, in the Freemen's case, grew so egregious—along with the fraud the group committed among local businesses—that eventually the FBI began to arrest its members, culminating in an 81-day armed standoff near Jordan in 1996.

The tactic largely fell into disuse during the first decade of the 21st century. However, its apparent revival among far-right extremists illustrates how deep the connection to old "Patriot" belief systems and strategies among current-day radicals really runs.

At her Thursday ceremony, Turner read a long-winded declaration (which she also posted on Facebook) to "alter and remove" DeWine, a Republican, as governor. "Mike DeWine has used his position; he has become so corrupt that he has oppressed the people," her statement read. "Governor Mike DeWine has become concentrated, grown and has become a Tyrant and will be held accountable immediately. He will receive a Tyrant's punishment."

Turner's language was different from that preferred by sovereign citizens—she refers to herself throughout it as "one people"—but conceptually her declaration was identical to that made by the 1990s "Patriots." This included the apparent belief that the same "one people" who arrest the governor are automatically slotted to replace him.

Afterward, she took the oath of office as governor of Ohio with the assistance of several supporters, one of whom was a notary public, and it was signed by several of the supporters as witnesses.

"This is a huge step for America," she said afterward. "This is just getting started with Ohio. We have figured out a way to save America and we are starting it today."

One of those witnesses—a man who Turner and her contingent referred to as "Wild Man"—wore a jacket declaring himself a "Patriot" and a member of the "III Percent" militia movement.

The man who reported that Turner was planning to arrest DeWine told police that Turner, a Springfield native, had called him at his home the morning of Oct. 16 and asked if he wanted to participate in arresting the governor at DeWine's home later that weekend and try him for allegations of tyranny before a "citizens court." He also said that Turner had suggested two penalties for conviction: permanent exile or execution.

He said that while he agreed that DeWine should be arrested, he expected the process to occur under established law enforcement authorities. He had hoped the group of DeWine critics could find a prosecutor who would charge him.

"(The caller) said 'no, we the people, we're going to arrest him,'" the source said.

"Do I think (DeWine) needs to be arrested? Absolutely," the man said. "But all that needs to happen within the confines of the law."

Turner told cleveland.com that she had participated in the call, but insisted that she had only discussed placing DeWine under house arrest, and made no specific plans to do so. She dismissed the man's claims: "He's a dingbat," she said.

The Ohio Capital Journal reported that a state representative said he recently met with Turner prior to the alleged call, and that she had inquired about the governor's home. Ohio State Police say they are investigating the matter, but Turner has not been detained.

DeWine commented on Friday about the plot: "At this point in my life, nothing shocks me anymore," he said. "We're going to continue to do what we need to do every day. Our life goes on and I'm going to do what I need to do. I don't know the details of the so-called plan. I can't really comment about that. As I said in regard to what happened with Governor Whitmer, it's despicable anyone would want to in any way go around our legal process that we have. We are a country, a state, a rule of law, we have a long tradition of that and anybody that wants to violate that or go around that, we all have a responsibility to denounce."

Ohio law on citizen's arrests permits them in only limited circumstances. There first has to be a reasonable belief—one based on real and not imaginary or theoretical evidence—that the arrestee committed a felony. You also can only detain a suspect until the police can furnish an arrest warrant; if there isn't a law enforcement officer, you have to transport the person to a court or judge who can make the determination.

An Ohio sheriff explained: "Felonies are capital offenses and a reasonable person would know. J-walking, littering are misdemeanor violations. A citizen would not have the right to engage themselves in something of that nature, but that certainly shouldn't deter them from reporting a crime."

The viability of citizen's arrests for broader uses such as Turner's, or the Michigan militiamen who appear to be planning a legal defense around the claim that they only planned to perform such an arrest of Whitmer, has never been recognized by any court or legal jurisdiction.

Attorney Sarissa Montague of Kalamazoo explained to mlive.com that in order for defendants in the Michigan case to claim they were making a citizen's arrest, they'd have to prove "that a felony actually had been committed and that any reasonable person acting without passion or prejudice would have fairly suspected" the same.

There was another citizen's arrest incident in Michigan recently involving a city councilman in Warren who attempted to make an arrest of his own. Eddie Kabacinski, a Trump supporter who at an April council meeting had donned a gas mask to mock anti-pandemic measures, is currently under investigation for having slapped a pair of handcuffs onto a protester who showed up at a Trump rally Oct. 14 in Eastpointe.

The woman had stuck three small Black Lives Matter stickers on Trump signs placed along the boulevard. Kabacinski chased her and grabbed her, at which point she sprayed him with silly string. The councilman—who carries the handcuffs regularly—pulled them out and put them on the woman with her hands behind her back until officers arrived. Eastpointe officers promptly removed the cuffs and released the woman.

"Putting a decal sticker over a Trump sign, and it says Black Lives Matter, you are promoting a domestic terrorist organization on a Trump sign and that's not good," he told a local weekly newspaper. "That's not the image that the Trump campaign or the Republican Party is trying to convey. We are trying to get back to law and order in this country."

Kabacinski's behavior in other situations is also under fire. After the home of a Black family in his council district was attacked three times—rocks through windows, tires slashed, a Black Lives Matter sign shot up with a gun—he had shown up as a counterprotester at a Sept. 19 event intended to voice support for the family, dressed in military fatigues with a gun on his hip, carrying a large Trump flag.

Most of the time, however, the threats of a citizen's arrest as a far-right tactic have been directed at public officials—and the intent has always been clear, too. In Montana in the 1990s, the judges who were threatened with it identified the issue clearly.

"Terrorism is what it is," said Marty Bethel, a city judge in the town of Hamilton who had faced an "arrest" threat unless she dismissed a traffic charge against a member of a local militia. "I hope someone takes this seriously, before blood is shed. If you let these people walk up one side and down the other, all you've done is empower them."