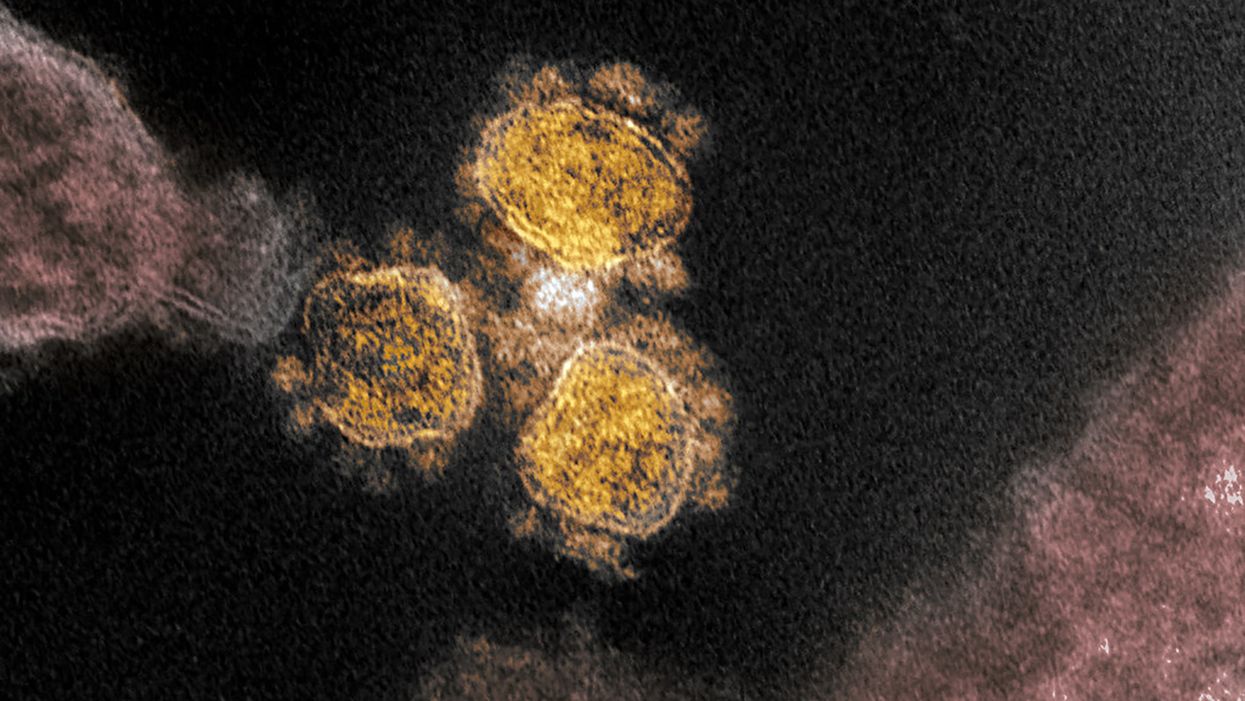 This transmission electron microscope image shows SARS-CoV-2, the virus that causes COVID-19, isolated from a patient in the U.S. Virus particles (round gold objects) are shown emerging from the surface of cells cultured in the lab. The spikes on the outer edge of the virus particles give coronaviruses their name, crown-like. Image captured and colorized at NIAID's Rocky Mountain Laboratories (RML) in Hamilton, Montana. Credit: NIAID
Matthew Rozsa
and
Salon
October 11, 2020

Earlier this week, the 2020 Nobel Prize in Chemistry was awarded to a pair of scientists who discovered a genetic technology that can alter DNA — and, perhaps, help researchers treat COVID-19 and other future diseases.

The scientists who discovered this technology, known as the CRISPR/Cas9 genetic scissors (or CRISPR for short — clusters of regularly interspaced short palindromic repeats), are Dr. Emmanuelle Charpentier from the Max Planck Unit for the Science of Pathogens in Berlin, and Dr. Jennifer A. Doudna from the University of California, Berkeley. In an interview with TechCrunch last month, Doudna explained that their technology could prove essential in fighting both the novel coronavirus and other dangerous microorganisms.

"It's really interesting to think about the ability to program CRISPR to be detecting not only the current coronavirus, but also other viruses," Doudna told Tech Crunch in September. "I don't think any of us think that, you know, viral pandemics are going away — I think this current pandemic is a call to arms, and we have to make sure that scientifically, we're ready for the next attack by a new virus."

CRISPR has become a household acronym, famous because of its potential to easily edit any organism's genome. CRISPR technology can and has been used to modify crops into genetically modified organisms (GMOs), correct genetic disorders and prevent or treat diseases.

CRISPR works by using a version of the protein Cas9 (one that has been complexed with a synthetic guide RNA) as a pair of molecular scissors, capable of "cutting" strands of DNA at pre-specified locations and adding new genes, removing existing ones or both.

The award of the Nobel Prize to CRISPR researchers symbolizes its tremendous promise to medicine. Indeed, scientists are already trying to use this technology to treat people with COVID-19. Scientists at Stanford University and the Molecular Foundry were working on using CRISPR technology to fight influenza when, in January, they decided to pivot toward trying to fight the novel coronavirus. Those scientists developed a technique known as PAC-MAN, or Prophylactic Antiviral CRISPR in human cells. Their next step is to try to synthesize PAC-MAN with other gene altering technologies and use that on animals. If that works, they will then try to test this technology on people, in the hope of more effectively treating those whose novel coronavirus infections developed into the COVID-19 disease.

CRISPR technology was developed after scientists learned how bacteria and archaea (single-celled organisms that do not have a nucleus) use CRISPR-derived RNA and a variety of Cas proteins to demolish the DNA of viruses and other foreign invaders. In 2017, a team of scientists led by researchers at the University of Tokyo managed to show CRISPR in action for the first time. Yet knowledge of CRISPR was taken one step further when Charpentier was studying a deadly bacteria called Streptococcus pyogenes and discovered tracrRNA, a previously unknown molecule that the bacteria used to slice up DNA.

After publishing her discovery in 2011, Charpentier began working with Doudna to both recreate this genetic manipulation tool and simplify its molecular structure so that it can be more easily used by human beings. Finally they figured out how to use the genetic scissors to alter not just virus DNA, but DNA molecules from any predetermined site.

Dr. Francis Collins, director of the National Institutes of Health and one of the first people to decode the human genome, expressed great satisfaction at Charpentier's and Doudna's recognition.

"This technology has utterly transformed the way we do research in basic science," Collins told The New York Times. "I am thrilled to see Crispr-Cas getting the recognition we have all been waiting for, and seeing two women being recognized as Nobel Laureates."