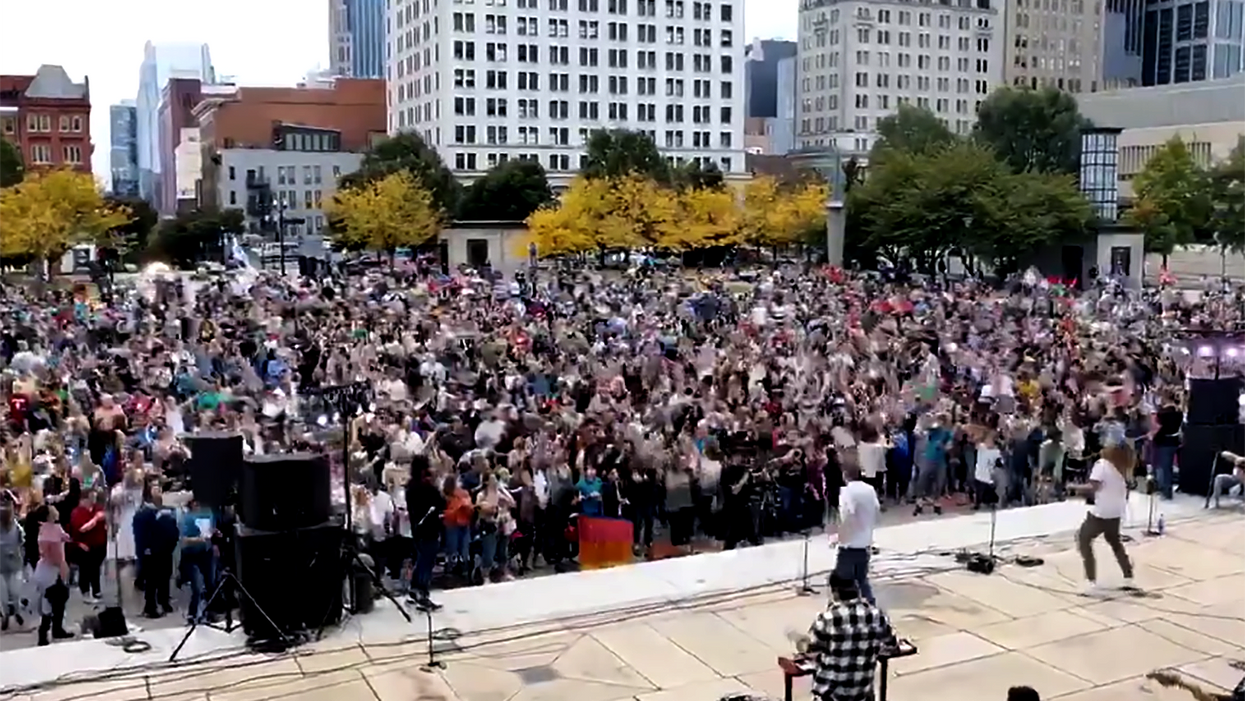 Despite increases in COVID-19 cases across the country, some people are committed to large gatherings. Christian pastor Sean Feucht has once again hosted a prayer protest at which he claims thousands were in attendance. The Sunday protest entitled "Let Us Worship" included live music with no social distancing between packed, unmasked crowds. Individuals gathered at the city's Public Square Park to protest safety measures in place in religious institutions in efforts to stop the spread of the novel coronavirus. Footage of the event has gone viral on social media with no masks in sight as people gather around what looks like a concert stage. "We had THREE venue changes and so much resistance BUT THE CHURCH WILL NOT BE SILENCED!" Feucht said in a tweet Sunday about the event.

According to The Tennessean, California-based Feucht hosted the event in Nashville despite not having a permit to do so. As a result, the Metro Public Health Department is investigating the incident. "We have worked very hard to slow the spread of COVID by taking a measured approach to protect the community," the health department told The Tennessean. "The Health Department is very concerned by the actions that took place at the event and we are investigating and will pursue appropriate penalties against the organizer."

Nashville has limited gatherings without city approval to 25 people, CBS News reported. Approved events can have a maximum of 500 people, but masks are required. Dr. Alex Jahangir, leader of the city's coronavirus task force, expressed concern about the gathering, especially during a time when the state has seen an increase in cases. Jahangir told The Tennessean he was unaware of the event until Monday morning. "Any time there are a lot of people together, without masks, I have concerns, and that holds true in this scenario," Jahangir said. "From the pictures I saw online, good Lord, did you see people wearing masks? I didn't. That is not helpful to our cause."

Police Chief John Drake also noted the irresponsible behavior as the police department was not present at the event. "I am greatly disappointed that the organizer of Sunday's event and those in attendance did not better prioritize their health and the health of others through social distancing and the wearing of face coverings," he said Monday, according to NBC News. "Personal responsibility is a necessity regardless of the purpose for a public event."

Last month Daily Kos reported on other events hosted by Feucht, including an event described as a rock concert in California where thousands attended without COVID-19 precautions. According to Feucht's website, he also hosted an event in Atlanta, Georgia, on Saturday and plans to host more in South Carolina, Missouri, and Washington, D.C. Feucht's "Let Us Worship" tour is spreading more than freedom of faith across the country—it's spreading COVID-19.

As my colleague Marissa noted, some religious leaders across the country have resorted to ignoring coronavirus regulations. COVID-19 cases nationwide have been linked to these events, which often violate public health rules, including social distancing, mandatory masks, and limits on those in attendance. Just a day after the event's occurrence, The Tennessean reported an increase of more than 250 cases within 24 hours; this has resulted in health officials being "very concerned" about the increase in numbers this event will bring.

A video from the event shared on YouTube depicts a crowd of all ages gathered at the Nashville courthouse Sunday: