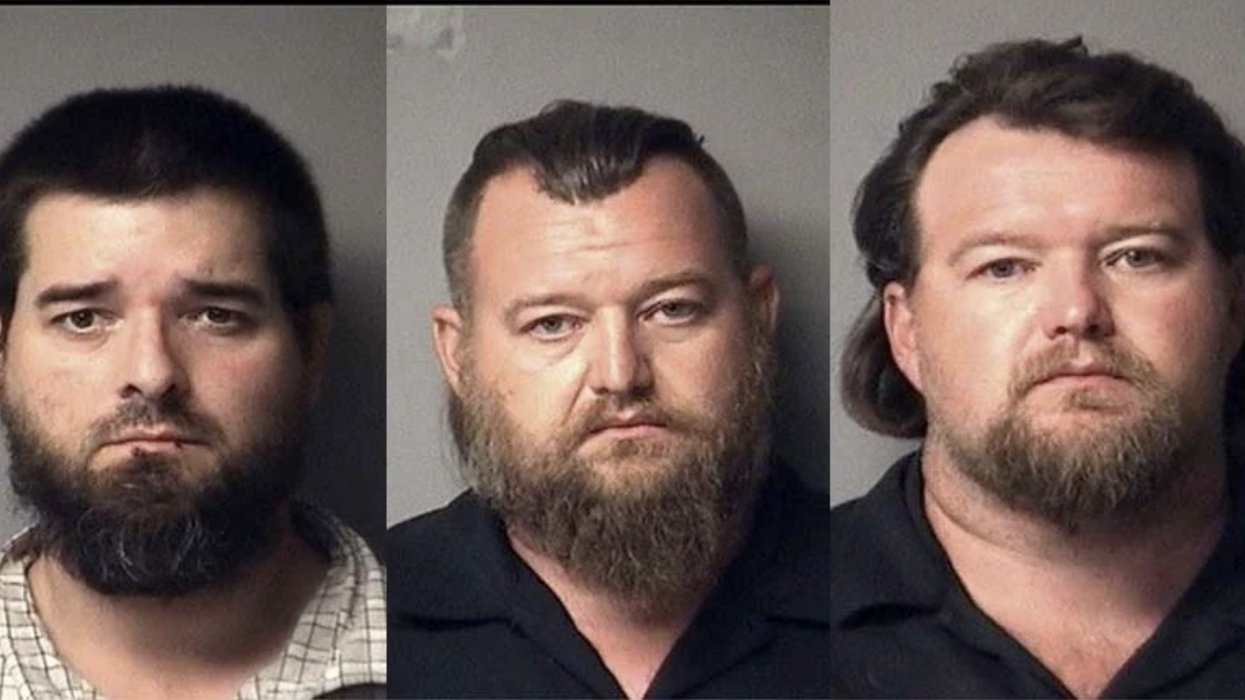 Discovering that terrorists can look like the guys next door is a jarring thing, especially if that's not how you've been conditioned to think of such matters. In Michigan this week, cognitive dissonance has been thick on the ground—especially as public officials who came too close to the plotters and their incendiary rhetoric have tried to wrestle with the consequences of last week's arrests of 13 Michigan militiamen who schemed to kidnap and assassinate Gov. Gretchen Whitmer.

A local sheriff who had appeared onstage at an anti-Whitmer rally this spring suggested to a TV interviewer that maybe the plotters—some of whom he knows personally—were just trying to make a citizens arrest. A Republican state legislative candidate opined that the arrests were "a totally bogus sham." And the state's Republican Speaker of the House, who has helped stoke the incendiary "tyranny" rhetoric that fueled the plotters, chastised Whitmer for pointing out the connection between the plotters' actions and the rhetoric used by Donald Trump and Michigan Republicans.

Dar Leaf, the sheriff of Barry County—where two of the accused domestic terrorists, William and Michael Null, reside and were arrested by the FBI Thursday—told a Grand Rapids interviewer that he believed the men might have been within their rights.

"It's just a charge, and they say a 'plot to kidnap' and you got to remember that. Are they trying to kidnap? Because a lot of people are angry with the governor, and they want her arrested. So are they trying to arrest or was it a kidnap attempt? Because you can still in Michigan if it's a felony, make a felony arrest," Leaf told Fox17 reporter Aaron Parshegian.

He added: "The two gentlemen that I know of from my county, were they involved in that? I don't know. They're innocent till proven guilty. And we really, really should be careful, trying to try them in the media."

The evidence unveiled by the FBI included multiple instances of surveillance of Whitmer's summer home, where the militiamen—who called themselves the Wolverine Watchmen—planned to abduct her, as well as multiple instances in which the men discussed killing her. The evidence also showed that not only had the men originally planned a paramilitary assault on the state Capitol, they also made plans to kill law-enforcement officers. The discussion of a "citizens arrest" of Whitmer was largely rhetorical.

Leaf's comments created an uproar. Shortly after the interview aired, Michigan's attorney general, Dana Nessel, ripped into him on Twitter:

As Michigan's top law enforcement official, let me make this abundantly clear-Persons who are not sworn, licensed members of a law enforcement agency cannot and should not "arrest" government offficials with whom they have disagreements. These comments are dangerous.

Leaf tried to defend the remarks subsequently by insisting that he only wanted to ensure that men weren't being "tried in the media."

"I don't want anybody to think I'm sympathetic towards these charges, right, these are very, very serious charges," he said. "What I don't want is I don't want us to be trying it in the media and we mess it up in the justice system somewhere, 'cause they can't get a fair trial."

Leaf told MLive: "The governor has the right to govern and also the right to be safe." Yet he went on to criticize officials like Whitmer and Nessel for blaming people like Trump and himself for creating an atmosphere empowering fringe groups. Leaf said the militia movement "has been brewing for quite some time" over what he described as "a gradual and growing loss of rights."

In fact, as Jen Hayden explored earlier, Leaf is a member of a law-enforcement organization closely aligned with the "Patriot" militia movement with which the plotters identified. He also was an outspoken critic of Whitmer's anti-COVID-19 pandemic orders.

At a May 18 "Michigan Patriots Rally" held at Rosa Parks Circle in Grand Rapids, Leaf had appeared onstage with several militiamen, including Michael Null. In his speech, he compared Whitmer's stay-at-home orders to being held unlawfully under house arrest. Leaf had also described Owosso barber Karl Manke—who had defied the governor's order by opening his shop—a "little version of Rosa Parks."

"What a totally bogus sham," Smith commented. "These citizens never did anything illegal. Law enforcement is employed to punish people who COMMIT crimes, not people The Governess simply HATES. You can legally hurt Whitmer by voting out her minions."

State Republican leaders were appalled, and announced they had withdrawn financial and other support for Smith's candidacy, calling the remarks "conspiracy theories and hateful remarks."

"If you can't denounce the evil plans and actions of these white nationalists, we don't want you in our caucus," Republican House Speaker Lee Chatfield said. "In fact, if there's any 'Republican' who thinks like this guy, we don't want your vote either. We don't support domestic terrorism."

Chatfield, however, also chastised Whitmer for her remarks laying some of the blame at Trump's feet that week: "Just last week, the president of the United States stood before the American people and refused to condemn white supremacists and hate groups like these two Michigan militia groups," Whitmer said, adding that extremists had "heard the president's words not as a rebuke but as a rallying cry—as a call to action."

In a Twitter thread, Chatfield criticized Whitmer, claiming she had kept the investigation under wraps: "Why weren't we warned of the plot to take hostages at the Capitol? The plot by these terrorists was against us too. Why weren't House sergeants warned? You knew and we weren't even given a warning. We had people working in the building and their lives matter too." However, it was the FBI, and not Whitmer, who had overseen the sharing of information with potential victims.

Chatfield also suggested that she shared in the blame: "Hatred and violence are wrong, and that's why I've continually denounced it," he wrote. "And I agree, it's time to tone the partisan rhetoric and 'the heat down.' Will you do the same for President Trump? Will the [lieutenant governor] do it to the entire GOP? We have to make this decision together."

However, Chatfield and other leading Michigan Republicans, had played their own not-insignificant roles in whipping up anti-Whitmer hysteria, as Michigan journalist Joshua Pugh pointed out on Twitter. When "Patriot" protesters had locked down Lansing with an anti-Whitmer protest on April 15 that featured Confederate flags and incendiary rhetoric, Chatfield had greeted them by waving a flag out his window and tweeting out encouragement.

Republican Senate Majority Leader Mike Shirkey had been even more incendiary. On the floor of the Senate during a subsequent Lansing protest—during which armed militia members were watching from the gallery above—Shirkey had called the governor a tyrant: "If she does not recognize the end of the emergency declaration, we have no other choice but to act," he said, not clarifying what kind of action he intended.

After Thursday's arrests, Shirkey was defiant: "This is no time to be weak in our commitment to freedom," Shirkey told a "Let MI People Go" rally at the Capitol. "We need to be strong…and not be afraid of those who are taking our freedoms away from us."

Shirkey also told the crowd at Thursday's rally that they were not the same people involved in the plot to kill the governor. However, the Detroit Free Press identified several of the arrestees as participants at the earlier protests against Whitmer's orders.

In Barry County, Leaf's remarks sparked calls for his resignation. Local residents organized a protest demanding he step down or face a recall movement—but that protest was called off when organizers became concerned about the safety of participants amid the likelihood of armed right-wing counter-protesters.

"Whereas I truly believe in the statement we were trying to make, I cannot in good conscience compromise the safety of my fellow Barry County residents," organizer Olivia Bennett wrote on the event's Facebook page.

"I have come to this conclusion for a couple reasons. First, there were many concerns about confrontational counter protesters. Second, this protest garnered enough attention this weekend that crowd size was a concern given short notice, security, and capacity at the commissioners' meeting."