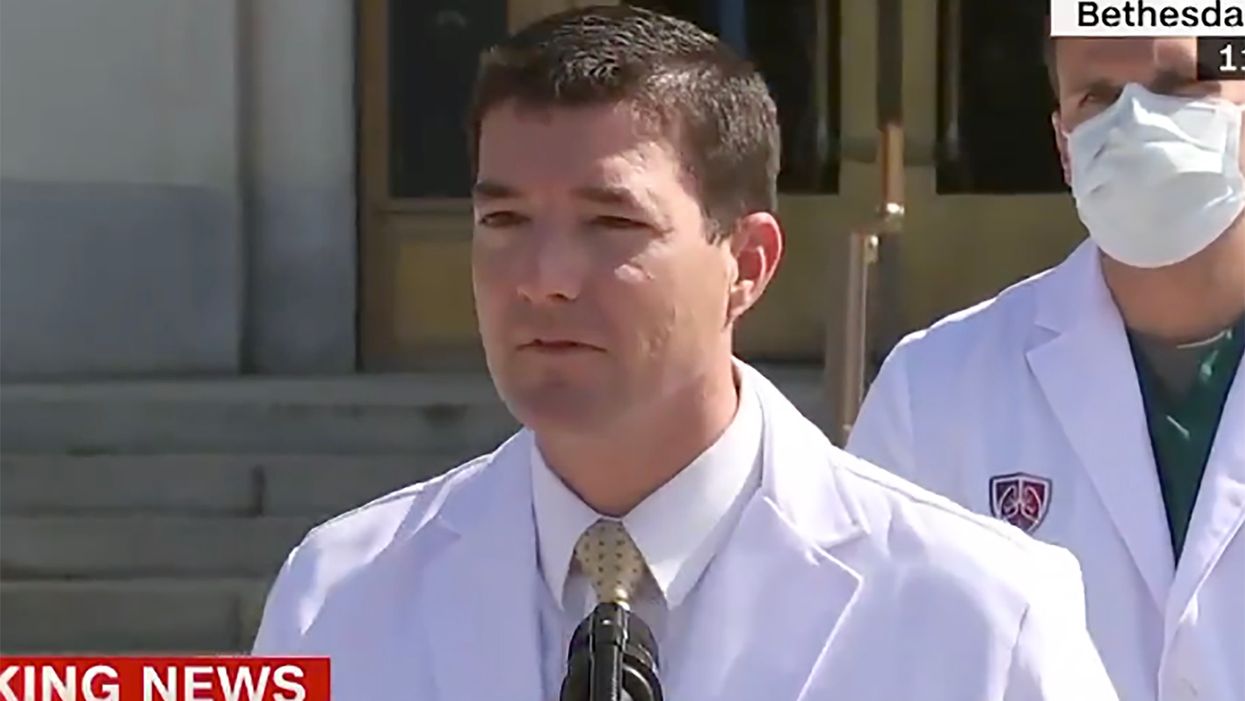 White House physician Dr. Sean Conley and members of Donald Trump's Walter Reed-based medical team held another press conference today to describe Trump's medical condition and, once again, it was anything but informative. Conley did attempt to explain his refusal yesterday to admit that Trump has had episodes in which he was given oxygen—implausibly suggesting he "didn't want to give any information that might steer the course of illness in another direction."

No, that doesn't make any sense.

"I didn't want to give any information that might steer the course of illness in another direction," Dr. Conley say… https://t.co/vwnL2cjpcs
— Kaitlan Collins (@Kaitlan Collins)1601827248.0

Actual information in today's briefing was likewise hard to come by. Conley said there have been two times when Trump has had oxygen administered, after blood oxygen levels dipped to 94 or 93%. Trump is now taking dexamethasone—a steroid normally given only to severely ill patients, and one that itself can have severe side effects. A doctor also assured that Trump's heart, liver, and kidney functions were in a "normal or improving" range—which implies that some of them are not currently normal.

Despite these suggestions that Trump remains seriously ill, Conley attempted to paint a far rosier picture of Trump's health, claiming Trump is improving enough that he could possibly be released "tomorrow." This seems either improbable or outright reckless: According to our have-to-be-guessed-at timelines, Trump has not yet entered the 7 to 10 day period when lung function in COVID-19 patients often dips to lower levels. If he is sick enough to require numerous treatments only given to the severely ill, such as dexamethasone, it seems unfathomable that Walter Reed doctors would release him before that 7-10 period has passed.

If Conley isn't simply lying about a possible release—which is likely—it would push back the onset of Trump's illness by many days. He would have been positive during debate preparations, and during the debate itself. The White House has refused to answer questions about when Trump last tested negative.

Because of the White House's incessant lying, Trump's condition therefore remains unknown. We know from images that he is able to sit upright—but because the pictures were clearly staged, including Trump signing his name to a sheet of paper that on inspection is otherwise clearly blank, we know only that. We can guess from the treatment plan being described that he is "seriously" ill—or that his doctors are using him as experimental guinea pig, throwing every known treatment plan at the disease to see what sticks.

We can infer from doctors that Trump is in no immediate danger of dying. But we can also infer that he's far sicker than Conley, in particular, is letting on.