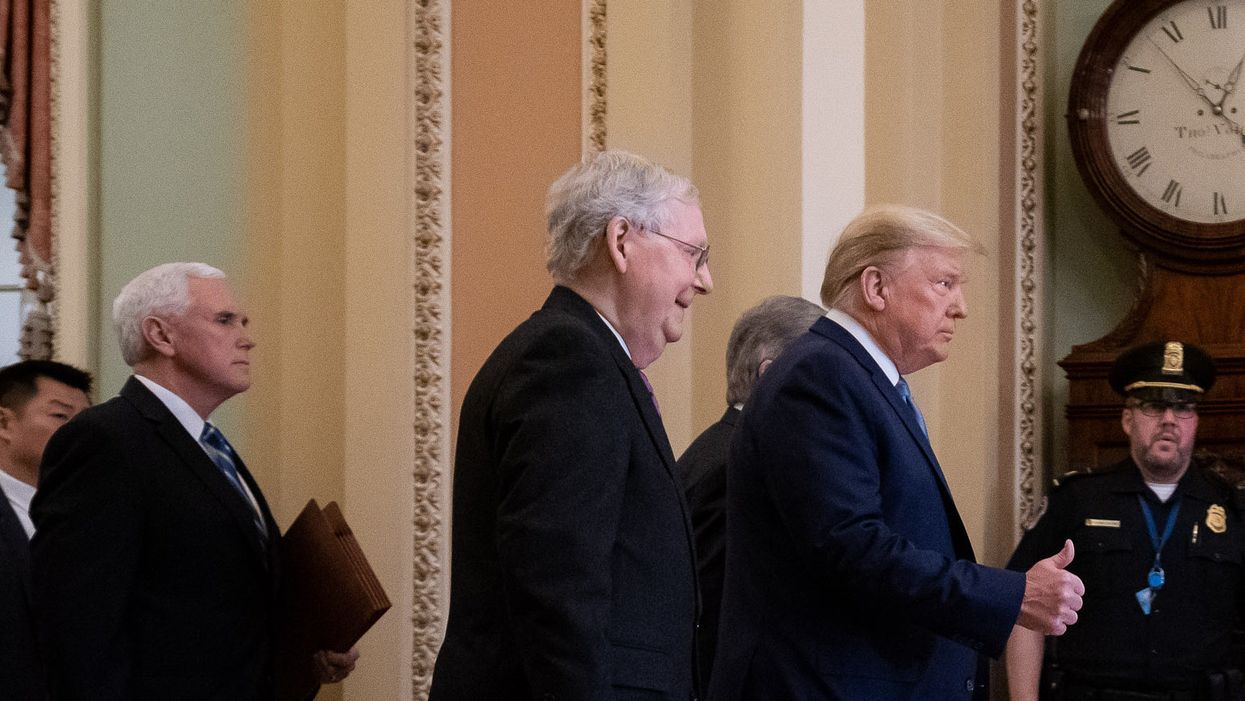 In Thursday night's debate, President Trump skirted Joe Biden's observation that it's Senate Majority Leader Mitch McConnell and other Republican Senators — not House Speaker Nancy Pelosi — who are blocking the "go big" stimulus package that Trump recently decided to promote before the election.

Trump kept on blaming Pelosi. But suppose that, with Nov. 3 in sight but unable to see beyond his immediate self-interest, he shoots himself in the foot by lambasting the Republican senators for blocking the stimulus he wants, thereby prompting some of his base to "punish" them at the polls, very possibly helping to hand the Senate to Democrats.

Although that would be a self-defeating strategy for Trump, it might not be bad for hundreds of thousands of his followers who are small businesspeople or self-employed in other ways and who, along with their customers and clients, need the stimulus as desperately as Trump does, albeit for "gut" economic reasons, not his narrow political ones. A Democratic Senate would probably join with the House (and a President Biden) to pass a stimulus package even more ambitious than whatever Pelosi and Mnuchin find possible.

Trump's self-absorption and opportunism have spotlighted not only philosophical divisions between Senate Republican hawks who can't stomach a $2 trillion stimulus and the office-holders who want only to hold on to their offices; Trump's pro-stimulus move also spotlights the economic canyon that yawns between our high-rolling con man of a president and millions of hard-working people whom his Republican Party has betrayed.

McConnell, currently in his own re-election fight, assumes that enough Kentucky voters are anti-government ideologues who will keep on shooting themselves in the foot by backing him and other Senate Republicans in blocking a stimulus. (Recent polling has him leading his challenger Amy McGrath statewide across income brackets and education levels.) He may be right to believe he can count on the support of the slice of Kentucky voters who believe "a wildly misleading image of recipients of public aid as thieves bleeding taxpayers dry," as New York Times economics columnist Eduardo Porter put it in his book "American Poison: How Racial Hostility Destroyed Our Promise":

"'Welfare queens' and other racial stereotypes peddled over the years by the political foes of redistribution… convinced white Americans that people of color are undeserving moochers from the public purse," Porter writes. "White voters marginalized by the same economic forces … could not figure out that they were shooting themselves in the foot" by cutting programs they imagined were serving only non-whites.

Thus many of McConnell's supporters have embraced "welfare reform" and Medicaid rules that culled 100,000 people from the rolls in recent years, even as the state, Porter writes, has "the most cancer deaths in the nation, and the most preventable hospitalizations" and is near the top in its death rate from diabetes. (Kentucky's Medicaid program has been a rollercoaster over the last several years; one of Democratic Gov. Andy Beshear's first orders of business last December was to roll back the work requirements his Republican predecessor Matt Bevin put on Medicaid recipients in an effort to derail the expansion enacted under the Affordable Care Act.)

A Kentucky friend of mine shared with me the phrase "shame-natured" to describe the mixture of "low self-esteem and fierce pride, independence, and a sense of honor," as she puts it, which some conservative white working-class Southern voters have long carried with them into the booth. But the pandemic has up-ended much in their lives, and a parsimonious response could put McConnell on thinner ice with GOP reliables whose incomes have shriveled due to the virus. Perhaps McConnell hasn't yet heard the concerns of Republican voters like the Corbin truck driver who told the Washington Post back in August that he's "scared to death of losing everything" and angry at GOP leaders for failing to authorize another round of stimulus payments.

Or perhaps McConnell is hoping that party-line voters who are hurting economically will give him a pass, especially in the rural parts of his state, or at least let him ride Trump's coattails as the President rails against "Democrat-led cities" and other dog whistles in his rallies and tweets. McConnell knows that whites' anger and resentment can shift easily, with a little prompting from the right, into blaming minorities for the many little increments of humiliation and loss that have accumulated in their own lives. The more obvious it becomes that their racism is hurting not only Black people but also themselves, the more furiously some people deny it, like philosopher George Santayana's fanatic, who redoubles his energy when he has forgotten his aim. Trump's demagoguery channels their hurts into cravings for scapegoats — not only Black people, but also the "elites" — and for revenge.

We have to hope that COVID is bringing a different set of priorities and calculations home to Trump's and McConnell's bases. The state's recent election of Beshear may signal the beginning of a slow shift in that direction (though recent polls suggest that approval of Beshear isn't necessarily boosting McGrath's chances in her race against McConnell, and Trump is projected to win Kentucky handily, if by a slimmer margin than 2016).

Opportunist that Trump is, he seems poised to seize on a shift in the wind if he deems it advantageous. McConnell may not sense it, or he might have too much invested in his own image as the power-broker and conservator of right-wing ideals to switch lanes now. With or without a big pre-election stimulus announcement, we'll see soon enough how much of the national Republican base is shifting and fragmenting as COVID cases rise and economic destitution sets in, and how much of it still resembles Santayana's fanatics after this election.