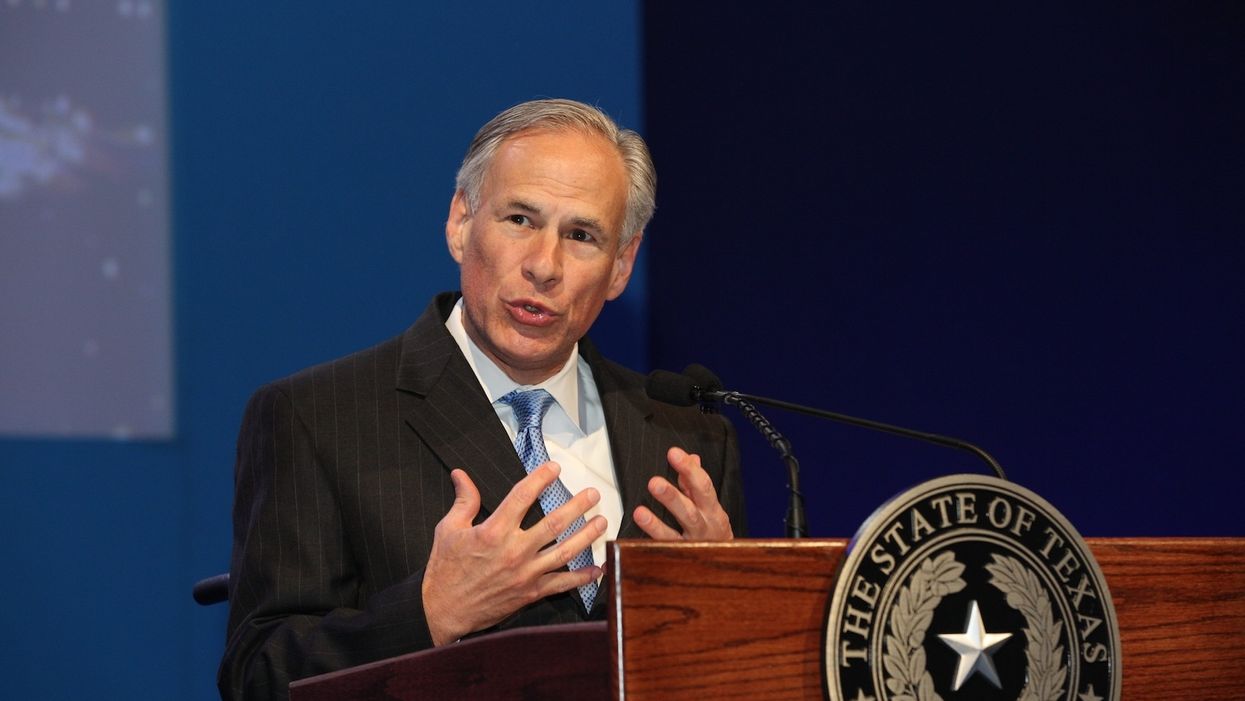 With polls showing the presidential race to be surprisingly close in Texas — which, historically, has been a red state — Republican Gov. Greg Abbott has resorted to a sleazy attempt at voter suppression. Abbott has ordered that in sprawling Texas, the number of locations for dropping off completed absentee ballots can be no more than one per county. And the Houston Chronicle's editorial board, in a scathing editorial published on October 2, calls out the Texas governor's brazen voter suppression move.

"Texas Gov. Greg Abbott framed his order limiting counties to only one location for collecting completed mail ballots as a way to enhance 'ballot security protocol' and ensure COVID-19 safety measures," the Chronicle's editorial board argues. "We need to call it what it is: voter suppression. Clear and simple."

The Chronicle points out that thanks to Abbott, Harris County — which includes Houston — has gone from having 12 drop-off locations for absentee ballots to only having one. Harris County just happens to be one of the most Democratic counties in Texas.

"There is no proof that shutting down drop-off sites will do anything to protect the integrity of the election," the Chronicle explains in its editorial. "If anything, the Harris County collection sites make voting even more secure, as they require voters to deliver their own ballots, sign in, speak with an assistant clerk and provide identification. Abbott's order will only make it harder and riskier for vulnerable Texans — the elderly and those with underlying health conditions — to cast ballots amid the pandemic."

Harris County Clerk Chris Hollins, the Chronicle points out, has been highly critical of Abbott's move, saying, "Our office is more than willing to accommodate poll watchers at mail ballot drop-off locations, but to force hundreds of thousands of seniors and voters with disabilities to use a single drop-off location in a county that stretches over nearly 2000 square miles is prejudicial and dangerous."

Similarly, in Travis County — which includes Austin — the number of drop-off locations for completed ballots has gone from four to only one. And Travis County is another one of the most Democratic counties in Texas. If former Vice President Joe Biden and Texas Democrat M.J. Hegar — who is challenging incumbent Republican Sen. John Cornyn in Texas' 2020 U.S. Senate race — win in the Lone Star State in November, it will require a strong turnout in places likes Harris County and Travis County.

Abbott, of course, would never admit it, but an unspoken reason for his actions is a fear that Biden might win Texas' 38 electoral votes in November. Polls released in September showed Trump ahead in Texas, but not by much. According to recent polls, Biden was trailing Trump by 1% (Data for Progress and Public Policy Polling), 3% (University of Massachusetts, Lowell and Siena College/New York Times), 2% (YouGov) or 5% (Quinnipiac). A Morning Consult poll released in September found Biden and Trump in a dead heat in Texas, and a Tyson Group poll found Biden ahead by 4% in the Lone Star State.

"Abbott's rationale for ordering the drop-off locations closed is so thin as to be almost laughable," the Chronicle's editorial board writes. "On Wednesday, Texas Solicitor General Kyle Hawkins told the state Supreme Court that his July 27 proclamation allowed voters to drop off mail ballots any time before Election Day and that state law permitted county clerks to designate multiple locations to do so."

The Chronicle concludes its editorial by urging Abbott to do the right thing and "rescind his order," although the editorial board probably won't be holding its breath.

"This is one mistake that Abbott shouldn't wait for the courts to make right," the editorial stresses. "He should rescind his order immediately — and pledge to do everything he can to make it easier for everyone to vote. That's what common decency and the U.S. Constitution require. No one, not even Abbott, is above that."