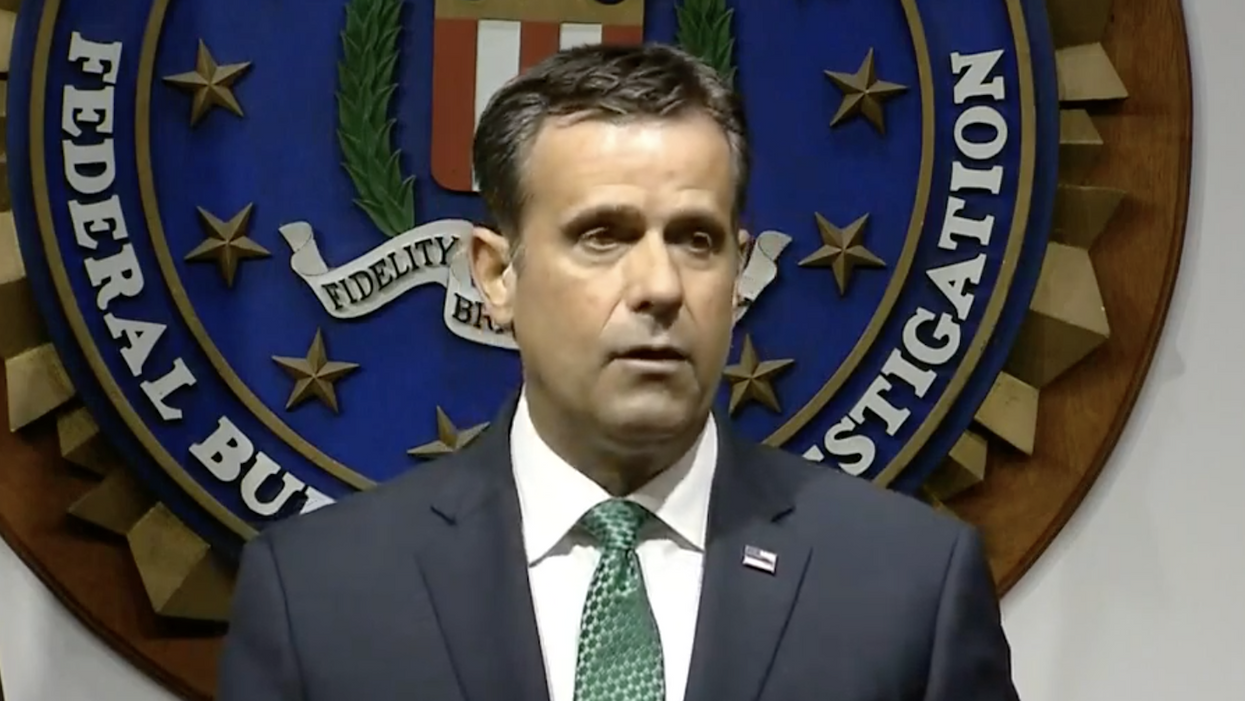 Director of National Intelligence John Ratcliffe and FBI Director Christopher Wray announced on Wednesday in a last-minute press briefing that both Iran and Russia have obtained voter registration information and have "taken specific actions to influence public opinion."

In particular, Ratcliffe said that Iran has been found to have sent "spoofed emails designed to intimidate voters, incite social unrest, and damage President Trump." He seemed to be referring to an incident described in a Washington Post story published right before the conference, which said the U.S. has concluded that Iran had sent emails pretending to be from the right-wing group the Proud Boys to Democratic voters.

The messages appeared to target Democrats using data from digital databases known as "voter files," some of which are commercially available. They told recipients the Proud Boys were "in possession of all your information" and instructed voters to change their party registration and cast their ballots for Trump.

It's not exactly clear the intent behind the emails. Ratcliffe, a partisan Republican put in place by President Donald Trump because he wanted a crony leading the intelligence community, seemed to give contradicting explanations. If the emails were intended to intimidate Democratic voters out of voting, that would presumably help Trump. But if the emails were meant as a false flag, designed to make Trump supporters look dangerous, then that would "damage President Trump," as Ratcliffe said. It's hard to see how Iran could have intended both outcomes. It's troubling that his explanation was this unclear, especially since he doesn't have a reputation for independence and credibility. (Ratcliffe and Wray took no questions at the briefing, refusing to give the press any opportunity to clarify their remarks.)

The other aim, though, seems quite plausible — the emails were designed to sow doubt, fear, and confusion about the election and its security. When Wray spoke, he encouraged viewers to trust in the American election system.

"You should be confident that your vote counts," Wray said. "Early, unverified claims to the contrary should be viewed with a healthy dose of skepticism. We encourage everyone to seek election and voting information from reliable sources, namely, your state election officials. And to be thoughtful, careful, and discerning consumers of information online."

He added: "We are not going to tolerate foreign interference in our elections or any criminal activity that threatens the sanctity of your vote or undermines public confidence in the outcome of the election."

Neither Wray nor Ratcliffe mentioned any details about how Russia is interfering in the election or what it might use voter registration data for. It's not clear whether that's because the FBI doesn't have any details about Russian interference or if it is simply unwilling to share them for whatever reason. This, too, is concerning, because the despite Ratcliffe's claim that foreign election interference isn't a "partisan" issue, Trump himself has repeatedly tried to cover up Russia's intervention in 2016 on his behalf. There's no way to be confident that isn't happening now.

But there was another even more glaring omission in the pair's comments. Neither mentioned the fact that Trump — not Russia, Iran, or anyone else — is by far the greatest threat to the credibility of the election. He has been fueling bogus conspiracy theories that the election is going to be "rigged" for months, and he has called mail-in ballots a "hoax." So there was something ridiculous about the press conference emphasizing the threat of foreign election interference, especially as Ratcliffe name-checked the president as authorizing the intelligence community's efforts to protect American democracy.

"The president has instructed me to keep the country informed as appropriate," Ratcliffe said. "We will not tolerate foreign interference in our elections."

Wray's remarks about "early, unverified" claims that votes won't count, and that state election officials are the most reliable sources of information about the process, could be read as an implicit rebuke to the president. Trump has repeatedly contradicted local election officials in trying to spread doubt about the integrity of the vote.

And in urging Americans to be "thoughtful, careful, and discerning consumers of information online," Wray was, essentially, telling them to be the opposite of Trump, who has spread absolutely ridiculous conspiracy theories on Twitter recently. When asked to defend himself at an NBC News town hall, he said simply: "l put it out there, people can decide for themselves."