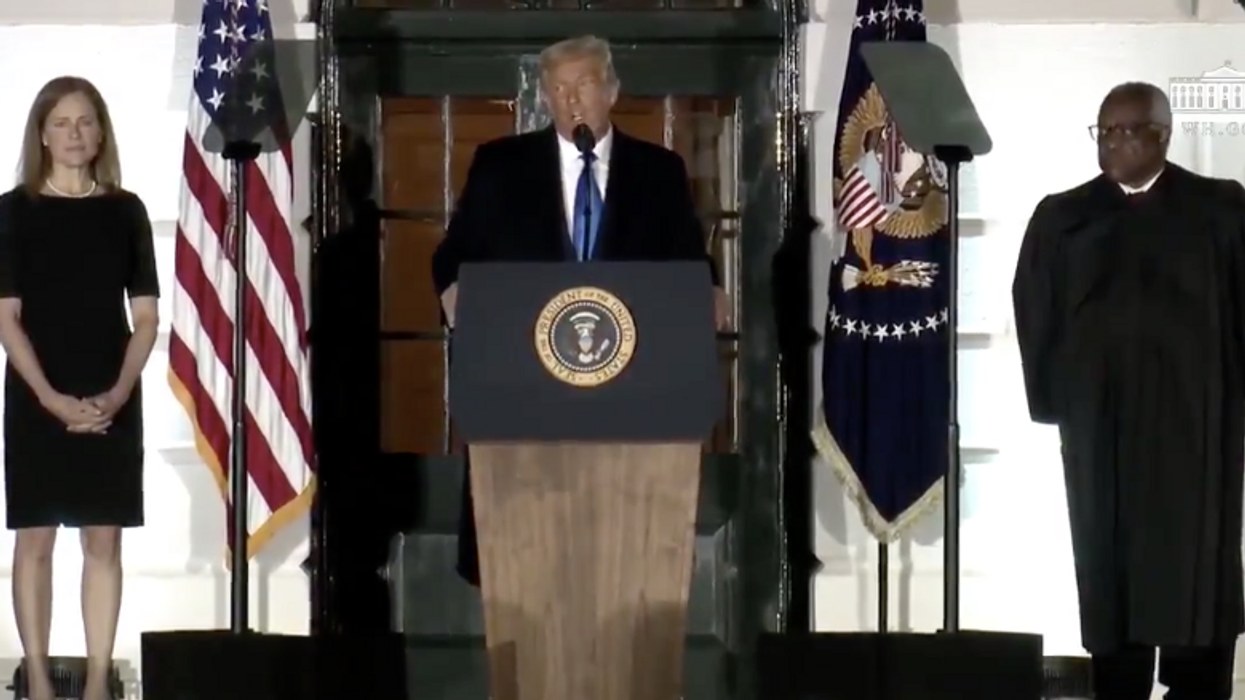 Minutes after Justice Clarence Thomas swore in Amy Coney Barrett Monday night she stood by the side of President Donald Trump on the White House balcony overlooking the South Lawn where guests – all Republicans – were assembled.

A photo of the moment captured by CBS News White House Correspondent Mark Knoller has gone viral, with many pointing to it as proof of Justice Barrett's fealty to President Trump. Others say it shows a lack of judicial independence, and that it was a choice for her to stand by his side – a poor choice calling in to question her judgment.

Some say it's tantamount to her appearing in a campaign ad for Trump. Indeed, Trump pinned this quickly-produced taxpayer-funded video featuring Justice Barrett to the top of his Twitter feed.

Here's what people are saying about Justice Barrett choosing to stand by align herself with President Trump.

@markknoller A portrait of disgrace of a woman who feigns piety but has no real morals or principles whatsoever, on… https://t.co/po8v2pnOep
— Mikko Alanne (@Mikko Alanne)1603767865.0

Will Justice Barrett be joining President Trump on the campaign trail for the next week? Or will she be too busy in… https://t.co/C7PiBh7Nkq
— David Rothschild (@David Rothschild)1603771664.0

But I do think some members of the conservative bloc will be shrewd in how they rule this spring—which would potent… https://t.co/d50EPWueK5
— Taniel (@Taniel)1603766997.0

Why is a Supreme Court Justice doing a campaign event for the President a week before the election? This justice an… https://t.co/79dHZxEQHk
— Ben Rhodes (@Ben Rhodes)1603764435.0

Appearing at a campaign rally for a president while election is going on is a certain way to lower your stature and… https://t.co/MEbuDngjgn
— stuart stevens (@stuart stevens)1603767961.0

Justice Barrett has her own Evita moment. Telling that her new colleagues (except Clarence Thomas) did not attend… https://t.co/r31pAi2snx
— Susan Glasser (@Susan Glasser)1603804497.0

This photo is proof that Barrett is a partisan hack, willing to pose for Trump's campaign This photo obliterates t… https://t.co/53jZ5tAoso
— Joe Sudbay (@Joe Sudbay)1603802798.0

“Any justice, judge, or magistrate judge of the United States shall disqualify himself in any proceeding in which h… https://t.co/SRKVgzjBBQ
— Cristian Farias (@Cristian Farias)1603767830.0