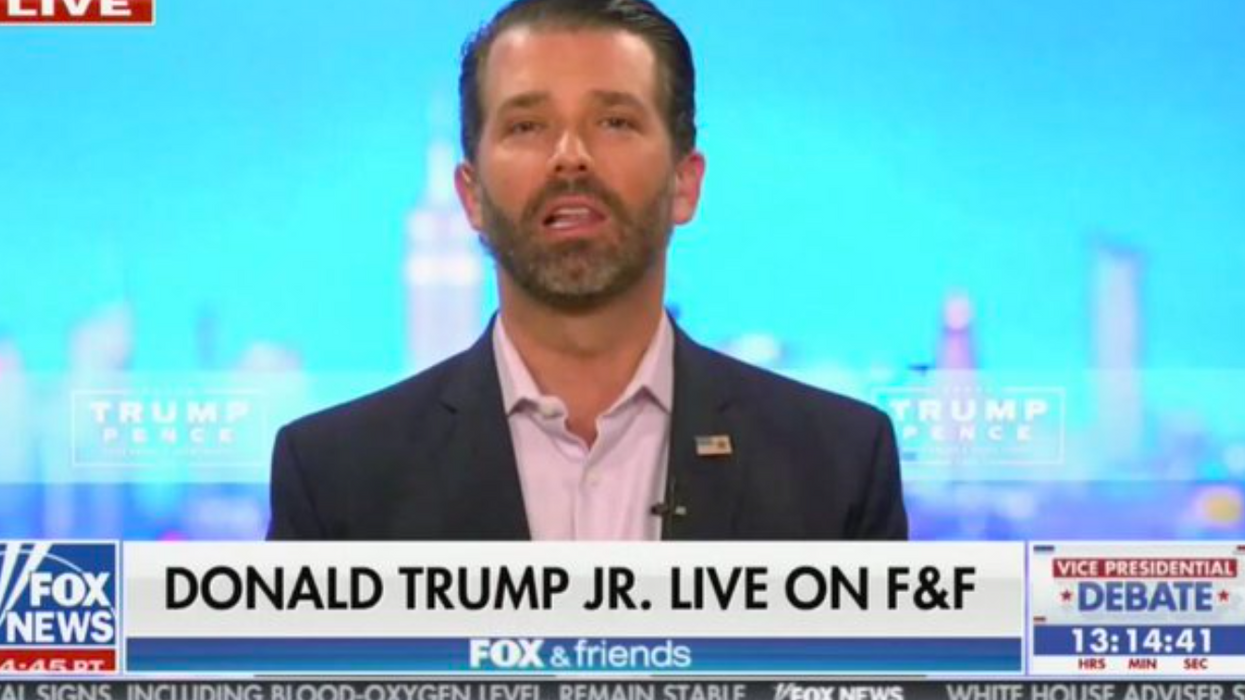 Donald Trump Jr. claimed House Speaker Nancy Pelosi (D-Calif.) has "substance issues" as he fired back at her for her latest criticism of his father, President Donald Trump.

During an appearance on Fox News, Trump Jr. was asked to weigh in on Pelosi's criticism of the president's decision to abruptly and unilaterally end negotiations for the next stimulus bill. More specifically, the president's son was asked about his reaction to Pelosi raising concerns about whether or not Trump is mentally capable of making such critical decisions since he is said to be on antiviral medications and steroids due to complications of coronavirus.

According to Trump Jr., Pelosi has "her own substance issues" although he offered no specific details about the allegation. He continued by echoing more baseless claims repeatedly perpetuated by his father.

"Nancy has her own substance issues according to the press and according to the media," Trump Jr. said. "I won't get into that. It's obviously nonsense. The reality is this: Nancy Pelosi was trying to stack literally, probably a trillion dollars of excess nonsense to bailout Democrat cities, to push for cashless bail, to get illegal immigrants stimulus checks as part of that package while the American taxpayer gets to foot the bill for her radical agenda."

Don Jr. sounds off on declassified Russia docs: 'We knew all along' www.youtube.com

Trump Jr.'s remarks about came less than one day after Pelosi reacted to Trump shutting down stimulus negotiations. During an appearance on ABC's "The View" Wednesday morning, Pelosi reiterated her concerns.

"I said yesterday to my colleagues, I said there are those who say that the steroids had an impact on people's thinking, I don't know, but there are those health care providers who say that," Pelosi said. "Also, if you have the coronavirus, it has an impact, as well. So the combination is something that should be viewed."

Pelosi added, "I think it's true to form. I think that the president has always had erratic behavior. Right now it's very, very dangerous, because he knows the danger of the virus, but he's in denial, as he was right from the start. Denial, delay, distortion."

Her remarks came amid the president's ongoing tweet storm on Tuesday, contradicting himself more than once. On Wednesday, Trump tweeted and retweeted more than 50 times just between the hours of 9:30 a.m. to 11:30 a.m., according to The New York Times.