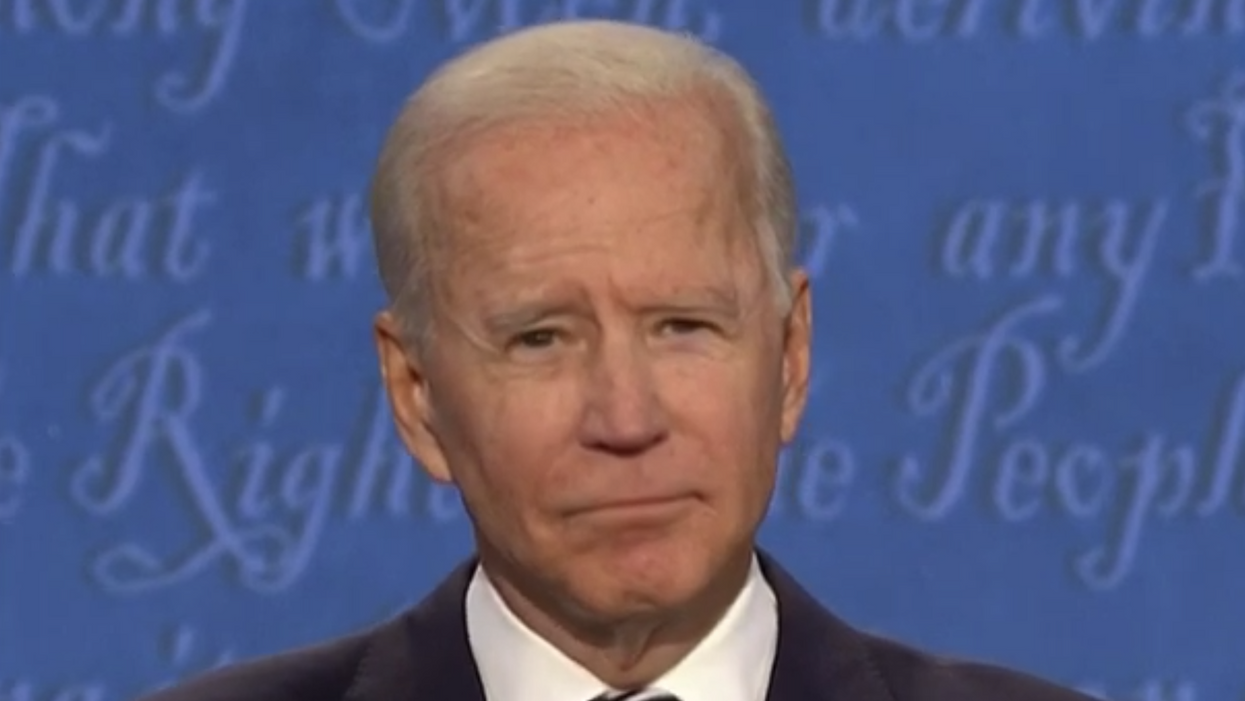 Here's the moment that forced Biden to tell Trump to 'shut up'
Chauncey DeVega
and
Salon
October 02, 2020

You may not want to hear this: Donald Trump "won" his first presidential debate with Joe Biden. American democracy and the American people lost.

This version of Joe Biden has not shown himself up to the task of taking on Donald Trump in a debate. Like Democratic nominee Al Gore in 2000, this version of Biden also seems likely to surrender if the Trump regime's machinations to steal the 2020 election succeed in causing causes chaos in the country on Election Day and beyond.

One participant in a focus group of undecided voters convened by Republican pollster Frank Luntz aptly described Biden at the first debate as "a nice guy lacking vision."

During Tuesday night's debate, Trump once again made clear that he does not plan to leave office peacefully if he does not "win" on Election Day. He does not believe in democracy, and hopes to use lawyers, the courts and Jim Crow-style "poll watchers" to subvert the 2020 election from the American people.

In a moment that rivals his description of neo-Nazis and white supremacists as "very fine people" following their murderous 2017 rampage, Trump ordered the Proud Boys and other right-wing thugs to "stand by" — presumably to await his orders.

There are several dominant narratives about the first presidential debate between Joe Biden and Donald Trump. The first such frame is that it was scatological political theater and a national and global embarrassment.

There is the obligatory and lazy "both-sides-ism" which tries to equate Trump's rude and disruptive behavior with Biden's attempts to intervene and (occasionally) defend himself. Some news headlines have describe Tuesday's debate as "contentious" and "chaotic," or as a "fracas" that featured "name-calling" and "insults" — as if the responsibility for that had been evenly shared.

Horserace journalists are of course hyper-focused on the polls. As in 2016, such myopia can blind observers to the larger cultural context of Trump's enduring power and appeal.

The "hope-peddlers" are asserting that Trump was not prepared for the debate, that he faces inevitable defeat and is flailing. In reality, Donald Trump clearly had a plan for the debate and followed through on it.

For many observers, their traumatized emotional reaction to Donald Trump — who is a bully and an abuser — is another lens that helps make sense of that debate.

Whatever the merits of these perspectives, they avoid the obvious: As an authoritarian, Donald Trump defines what it means to "win" a debate very differently from the way the mainstream news media and other political observers do.

In that sense, Trump won Tuesday night's debate. We must realize that Trump has no plans to leave office. He knows he will not win if all the votes are counted. The debates are therefore a platform for him to circulate lies about "voter fraud" so he can use the courts, Republican legislatures and other means to declare himself the victor. The debates are also a tool for Trump to encourage violence by his supporters against liberals, progressives, nonwhite voters and others identified as being the "enemy." He accomplished these goals during the first debate.

As an authoritarian, Trump has no respect for the debates as part of a democratic process that helps to confer legitimacy on a candidate and to inform the voting public. So he ignored moderator Chris Wallace, talked over Biden and tried to bully him, and was openly contemptuous of the entire event. Attacking the premise of the debate and its norms was a way for Trump to attack democracy itself, and to establish himself as outside it and superior to it.

Trump approached the first debate with Biden as pure combat. Biden, by contrast, appeared to believe he would be involved in a conversation, even if a spirited and unruly one. Like a dirty barroom brawler, Trump tried to clinch with Biden, hold him by the belt and smother him. He interrupted Biden and Wallace some 70 times. He also "worked the ref" — in this case, the weak and overwhelmed moderator — to the point where Wallace abjectly offered Trump more opportunities to speak and promised him easy follow-up questions.

If one were to read the transcript of Tuesday's debate, Joe Biden was more compelling, coherent, intelligent and "presidential." But watching the debate in real time showed Biden often speaking too quietly, not getting in clear rebuttals and allowing Trump to dominate him. Biden's face seemed inexpressive and almost sad, and he appeared lost in key moments where he did not respond to Trump with the force demanded — for example, when Trump brought up the infamous 1994 crime bill or attacked Biden's sons. In terms of demeanor and body language, Biden looked exhausted by Trump's orchestrated chaos.

Ideally, a debate is supposed to be an extension of the marketplace of ideas and a space for communicative democracy. In practice, the spectacle of televised political debates makes that nearly impossible.

As many media scholars have observed, television reduces "discourse" to sound and images. On that terrain, Donald Trump dominated Joe Biden.

Undecided voters are likely to be left even more confused and disheartened, and therefore less likely to vote, after watching the way Trump destroyed any semblance of coherence or literal intelligibility. Undecided viewers are not alone in that sentiment: a new CBS/YouGov poll reports that "more than two-thirds (69%) of likely voters who tuned into the broadcast say it left them feeling annoyed."

Disgust among voters advances Donald Trump's interests: the more he can create chaos and a lack of faith in "the system", the easier it is for him and the Republicans to expand their authoritarian and fascist project. The goal of Trumpism in adapting fascism to America is to maintain a veneer of "democracy," but in practice install an authoritarian regime in which the Trump family and a numerically tiny group of plutocrats and white right-wing Christian fascists wield near-total power over the whole society.

It is true that Trump bullied Biden and Wallace in much the same way as domestic abusers bully their spouses and intimate partners. Trump's behavior likely "triggered" many people who have faced such abuse in their own lives. But for Trump, who sees himself as an alpha-male, hyper-masculine leader, this was a preferred strategy. Dominance is central to the performance of fascism, and is a principal reason why the followers are enthralled by and in love with their Great Leader.

Joe Biden appeared vulnerable, empathetic and relatable in the face of Trump's abuse. But that is not the type of political strength, muscle and courage needed to defeat fascism and authoritarianism.

And because fascism is a sociopathic (if not psychopathic) ideology, human decency and vulnerability will not peel away Trump's followers and thus weaken him. Instead, such emotional openness only encourage their aggression. As mental health professionals have repeatedly warned, Donald Trump is a political sadist who is fueled by the pain and weakness of others. His deplorable supporters are motivated by the same impulses.

To defeat Donald Trump and what he represents, the American people do not need "Nice Joe" or "Reasonable Joe" or "Empathetic Joe," a public figure who can perform his own more authentic version of Bill Clinton's "I feel your pain."

This moment of crisis, with its fascist assault on American democracy, the rule of law and human and civil rights — along with a plague that has killed at least 200,000 people so far — demands Champion Joe.

In the upcoming debates and the weeks remaining before Election Day, Joe Biden must have some fire in his belly if he wants to win. He must speak loudly and directly, and confront Trump as the dirty street fighter — and coward — that he is. Biden must use declarative statements. He must look directly into the camera while telling the American people, "Donald Trump is killing you."

Joe Biden has many options available for his truth-telling about the evils of Donald Trump.

Even if Joe Biden finds a way to win the election and take office, the deep institutional, cultural, political and social problems that spawned Donald Trump and his movement will not magically disappear.

At the Nation, Elie Mystal describes the depths of America's problems in the Age of Trump and beyond:

Things are bad. Worse than a lot of people are willing to admit. The only reason we can even hope that voting may get us out of this mess is that Trump is historically incompetent. But he's been able to get this far because of systemic bias in our institutions, our media, and our populace. If we do not tear down the structures that helped Trump rise and thrive in the first place, a politician who is just as racist but slightly less bumbling could easily pick up these pieces and finish what Trump started. Things are bad now, but they can always get worse.

Champion Joe could begin to heal the country from all the harm that has been done by the Age of Trump and its agents. Is the real Joe Biden up to the task? One hopes the answer is yes, because the future of American democracy depends on it.

Unfortunately, the Joe Biden who showed up at the first debate with Donald Trump seemed like an old, tired soldier who is fighting his last battle, not the warrior for hope that America (and the world) needs to lead us out of the darkness and into a new greatness of democratic renewal.

Two debates still remain. Biden still leads in the polls. There is still time for the best version of him, Champion Joe, to emerge and take the reins.