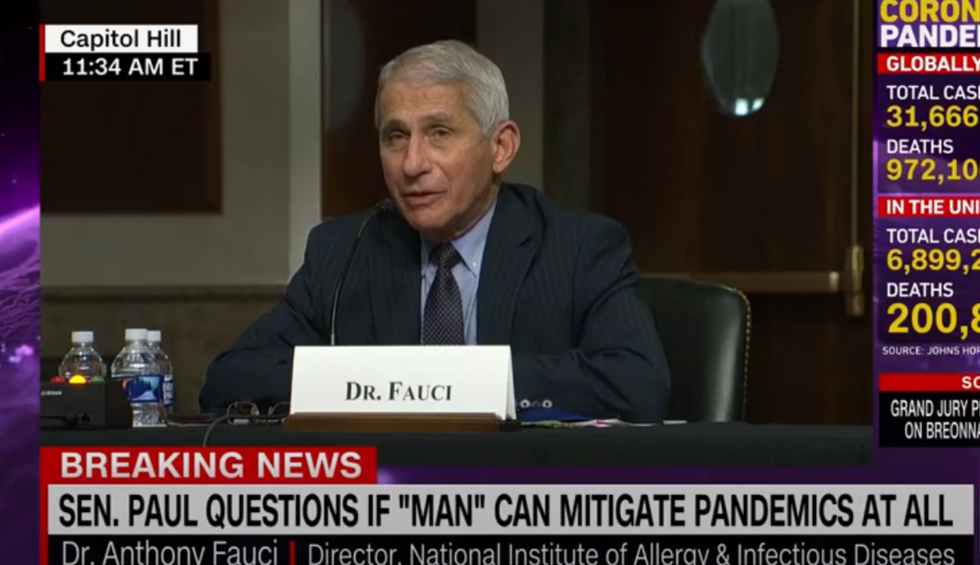 Dr. Anthony Fauci, director of the National Institute of Allergy and Infectious Diseases, became embroiled in a heated exchange with Sen. Rand Paul (R-KY), defending his professional expertise and his public health agency's handling of the coronavirus pandemic.

Fauci testified before the Senate Committee on Health, Education, Labor, and Pensions (HELP) on Wednesday where his expertise was challenged by the Republican senator. Paul, an ophthalmologist, criticized the infectious disease expert for applauding New York Gov. Andrew Cuomo (D) for his handling of the coronavirus. Emphasizing that New York still has the highest state death toll in the United States, Paul insisted Cuomo had not done a great job mitigating the spread of the coronavirus in his state.

“You’ve been a big fan of Cuomo and the shutdown in New York,” Paul pushed back. “You’ve lauded New York for their policy. New York has had the highest death rate in the world. How can be jumping up and down saying Cuomo did a great job?”

Fauci immediately fired back to defend his stance as he insisted Paul's perspective was "misconstrued." The infectious disease expert admitted that, like most states, New York also made mistakes as he highlighted the state's achievement in getting the state's infection rate down to 1%.

“You’ve misconstrued that, senator, and you’ve done that repetitively in the past,” Fauci said. “They got hit very badly and they made some mistakes. Right now, if you look at what’s going on right now, the things that are going on in New York, to get their test positivity 1% or less, is because they are looking at the guidelines that we have put together from the task force of the four or five things of masks, social distancing, outdoors more than indoors, avoiding crowds and washing hands…”

The senator interrupted Fauci with a baseless argument as he attempted to attribute the low positivity rate to "community immunity." By that time, Fauci's patience with the senator had waned.

Paul interjected, “Or they’ve developed enough community immunity that they’re no longer having the pandemic because they have enough immunity in New York City to actually stop.”

“I challenge that, senator,” Fauci replied, before he was interrupted by Committee Chairman Lamar Alexander. Refusing to back down, Fauci finally sounded off on the senator's long history of stark criticism toward him.

“Please, sir, I would like to be able to do this because this happens with Senator Rand all the time.” He then turned to Senator Paul and said “You are not listening to what the director of the CDC said that in New York it’s about 22%. If you believe 22% is herd immunity I believe you’re alone in that.”