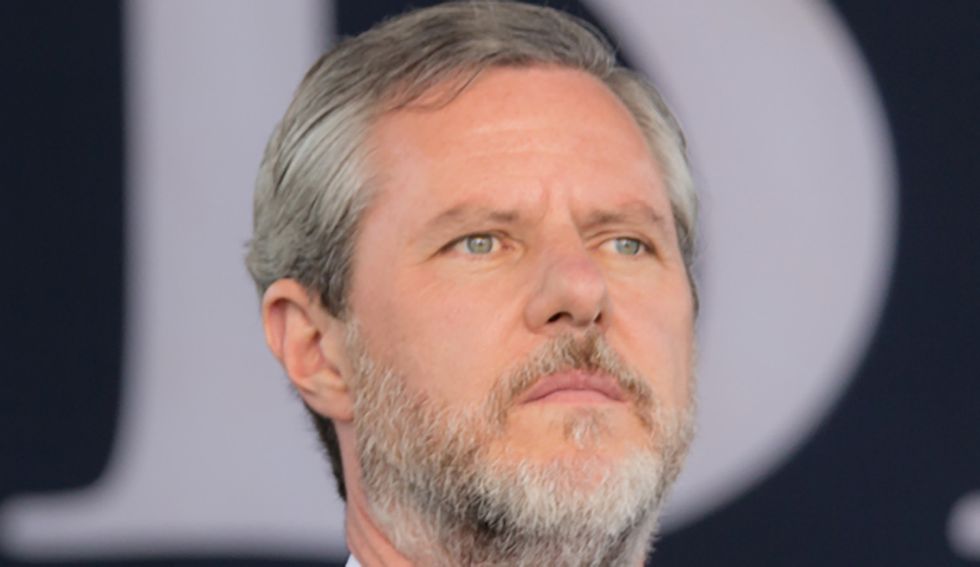 Jerry Falwell, Jr. fell down, cut himself, and lost "a lot of blood," his wife Becki Falwell told the 911 operator the night the disgraced and now-former Liberty University chancellor and president officially resigned.

HuffPost obtained a copy of the call to Bedford County, Virginia emergency officials around 2:30 AM on the morning of August 31.

Becki Falwell said she received a call from her husband around 11 PM when she was at church. He said he was bleeding and had cuts on his face. She said when she arrived home she had to break down the locked back door with a chair.

It's unclear why 911 was not called until hours after Falwell, Jr. reportedly contacted Becki Falwell.

“The more I tell you the name, the more you’re going to understand why we’re not talking to you right now,” Becki Falwell said. Dispatch logs, obtained by HuffPost via a public records request, state that “He won’t let her take him to the hospital as he is stubborn. Caller was not forthcoming.”

An officer dispatched to the Falwell home said, “Jerry had slurred and slowed speach (sic) and would repeat things already asked.”

Emergency responders found “empty alcohol containers,” and "observed lacerations on Jerry Falwell Jr.’s face, including under his left eye, across the bridge of his nose, and above both his right and left eyes."

"Jerry Falwell Jr. said he hit his head on a trash can, and that there was 'blood in the area he indicated,'" HuffPost reports the responders noted.

Jerry Falwell, Jr. infamously resigned after the couple's former "pool boy" revealed they had had an intimate relationship with him. Carlos Granda says for years he would have sex with Becki Falewell while Jerry Falwell, Jr. "enjoyed watching."

Liberty University announced it has hired a forensic investigator to examine "financial, real estate and legal" matters related to Falwell's management of the university.