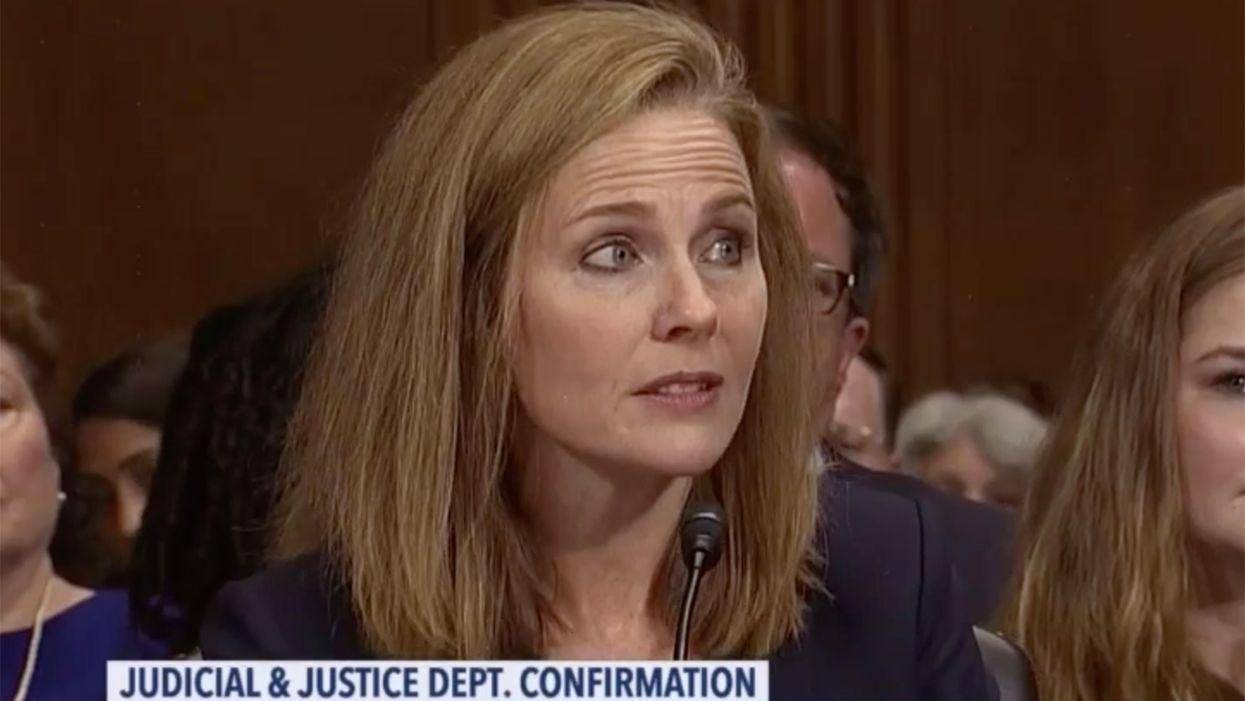 Amy Coney Barrett regards herself as an "originalist," that is, someone who believes that all legal decisions must be based on the "original understanding" of the Constitution. This is often put forward as a straightforward, consistent lens through which law can be viewed, rather than trying to put into context little things like shifting views on race and gender equality. However, originalism is further complicated by a split between groups focused on "intent" and those focused on "meaning." And if you think those are the same things … well, you're just wrong. Intentionalists believe the law is determined by what the original authors of the Constitution intended when they took quill to parchment. Those focused on meaning insist that they support the "public meaning" of the words at the time they were written. People who, like Barrett, belong to the later group, insist that their interpretation is more consistent.

In fact, both approaches require jurists to peer into the minds of 18th-century Americans, interpreting words, attitudes, and relationships that have shifted enormously over two and a half centuries. In short, any claim that the nation can be properly governed by divining the inner monologue of wig-wearing slaveholders not only makes about as much sense as using the plans for a Conestoga wagon as the repair manual on the Space Shuttle, it's also just plain bullshit.

But there's something even more odd about how conservatives like Barrett apply originalism. Because they seem to believe that the "original meaning" of every word and phrase just happens to be a conservative meaning. And where they can't find the meaning that they want, these dedicated preservationists have a second approach … throw it out. Throw it all out. Like the entire 14th Amendment.

The 13th Amendment may have abolished slavery when it was ratified in 1865, but it took the14th and 15th Amendments to define what the end of slavery really meant in terms of law. After all, slavery is more than just forced labor. If slavery "ended" but some people still were denied equal protection, equal rights, and equal representation, was slavery really over? It took until 1868 for the 14th Amendment, upholding citizenship rights and equal protection, to be ratified. It wasn't until 1870 that the 15th Amendment extended this to voting rights.

As far as the 14th Amendment goes, it includes what are now referred to as the Citizenship Clause, the Privileges Clause, the Due Process Clause, and the Equal Protection Clause. In short, it says that everyone born in the United States is a full citizen, with the full rights due to a citizen, and can't be deprived of those rights unless they're given due process of law. All of this makes the 14th Amendment integral to questions of citizenship, and foundational for Civil Rights legislation. It's such an important amendment, that legal scholars have called it "the second Constitution" for its attempts to tear out the elements of slavery built into the original document. Among other things, the Supreme Court has made it clear that the Civil Rights Act of 1964 rests entirely on the authority granted to Congress by the 14th Amendment.

For clarity, here's Section 1 of the 14th Amendment.

That's not just pretty straightforward, it's a pretty undeniable good. So how did it come to be that when Barrett writes about this text, she mentions it in this way.

How did originalists, the people who are supposed to be following the text as written, come to doubt the legitimacy of a whole chunk of that text? Specifically, how did they come to X-out the part of the Constitution that ensures rights are extended to people of color and children of immigrants?

Back in 2011, The Atlantic took a look at this question and how conservative Republicans became "14th Amendment deniers." For some Republicans, the 14th Amendment was viewed as being only intended to help those who had been directly enslaved, and not applicable to future generations. This view has become common in right-wing media, and sorry as that sounds, it's not even the most radical view.

The even uglier approach has been to outright challenge the validity of 14th Amendment because members of Confederate states were not seated in Congress when the amendment was proposed just after the end of the Civil War. Because of this, say the deniers, the Congress itself was illegitimate, and so anything it recommended—including the 14th and 15th Amendments—are illegitimate.

This is not even worthy of being called a "myth." There is not the least bit of justification under law to support this position. There never has been. However, this claim has become deeply embedded in the whole Lost Cause, South Shall Rise Again, Back to the Cotton Fields culture of conservatives—especially Southern conservatives. And just like Confederate statues, this mythology has found admirers in the modern Republican Party.

How far has it gone in the past? Far enough that in 1957, Georgia's state legislature passed a resolution titled "A memorial to Congress of the United States of America urging them to enact such legislation as they may deem fit to declare that the 14th and 15th amendments to the Constitution of the United States were never validly adopted and that they are null and void and of no effect." The reason that Georgia did this in 1957 was simple—it wanted to uphold segregation, and it rightfully understood that the 14th Amendment made that position impossible.

To be absolutely clear, there is nothing in textual originalism that requires adherents to view the 14th or 15th Amendments as any less legitimate than any other additions to the original document. The idea of the "illegitimate 14th Amendment" is simply not a serious legal argument. It is white supremacist mythology that has gained supporters within the Republican Party specifically because it presents the basis by which all Civil Rights legislation can be undone.

That Barrett brings up questions of the 14th Amendment being legitimate in her writings with considerable frequency and apparent support should be an absolute bullhorn to the nation that she believes all Civil Rights legislation to rest on thin air. While Barrett has listed Brown vs. Board of Education among those Court decisions she regards as "super-precedents," she voted in 2017 to refuse a re-hear a case in which a company segregated employees by race to different locations. She has clearly stated her opposition to marriage equality, denied that rights extend to transgender Americans, and all that is on top of her direct threat to Roe.

Amy Coney Barrett stands as a threat to not just everything Justice Ruth Bader Ginsburg achieved in her career, but to work that has been upheld by many members of the court—Democrats and Republicans—over the last half-century and more. She's not an originalist, she's an "eraserist."