'Which side will our military be on?' Trump and GOP openly hatch election theft plot 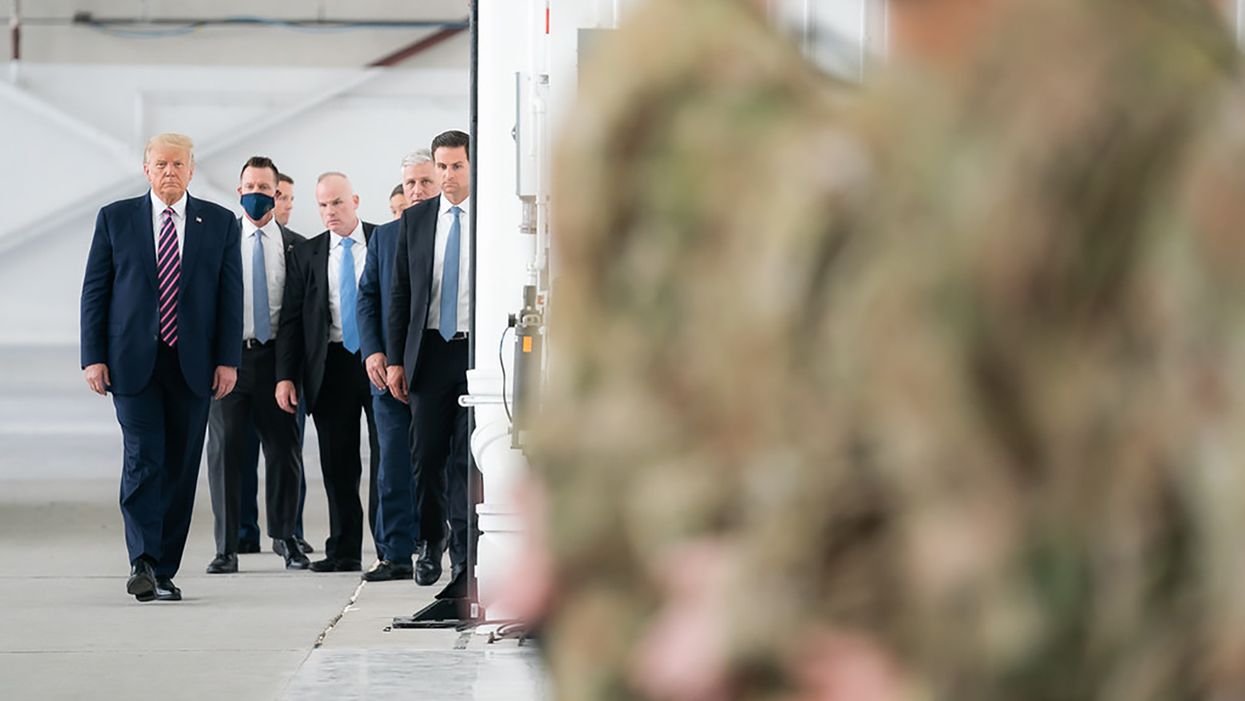 Amid President Donald Trump's transparent efforts to sow doubt and discord around this year's election, his desire to confirm a right-wing Supreme Court justice ahead of November's contest, and his repeated refusal to commit to a peaceful transfer of power regardless of the outcome, the specter of Trump ordering active-duty troops to quash protests during a possibly chaotic interregnum has reportedly provoked anxiety at the Pentagon.

According to Friday reporting by the New York Times, high-ranking military leaders have vowed to keep the armed forces out of the electoral process and its potentially chaotic aftermath, with Defense Department officials saying top generals could resign if the commander in chief tries to deploy them to U.S. streets.

As the Times reports:

Senior leaders at the Pentagon, speaking on the condition of anonymity, acknowledged that they were talking among themselves about what to do if Mr. Trump, who will still be president from Election Day to Inauguration Day, invokes the Insurrection Act and tries to send troops into the streets, as he repeatedly threatened to do during the protests against police brutality and systemic racism.

The Insurrection Act gives the president the power to deploy active-duty military personnel to neutralize civil unrest even if governors are opposed to it. General Mark Milley, chairman of the Joint Chiefs of Staff, and Defense Secretary Mark Esper both objected to taking that route this summer, and Trump yielded, though not before nearly firing Esper.

But the Times noted that Trump, "who refers to the armed forces as 'my military' and 'my generals,' has lumped them with other supporters like Bikers for Trump, who could offer backup in the face of opposition" this fall and winter.

"Which side will our military be on when this happens?" tweeted Charles Idelson of National Nurses United earlier this week after Trump refused to commit to a peaceful transfer of power if he is defeated at the polls. In other countries, a head of state's threat to "get rid of the ballots" to ensure a "continuation" rather than a "transfer" of power would be called a coup d'état, Idelson remarked.Many have been wondering for weeks what will happen if Trump, who has declined more than once to abide by the results of the election and has repeatedly and baselessly attacked mail-in ballots in an attempt to undermine the validity of the vote—which is already underway in some states—loses and refuses to voluntarily leave office.

In all the other banana republics they call this a coup d etat? Which side will our military be on when this happen… https://t.co/iodAYqYtYr
— Charles Idelson (@Charles Idelson)1600931521.0

On August 11, retired Army officers John Nagl and Paul Yingling argued in an open letter to Milley that "you may have to choose between defying a lawless president or betraying your constitutional oath... If Donald Trump refuses to leave office at the expiration of his constitutional term, the U.S. military must remove him by force, and you must give that order."

As CNN reported last month, Nagl and Yingling's "advocacy for having the armed forces get involved in settling a disputed election prompted backlash from both the Pentagon and other experts in the field of civilian-military relations."

When answering questions posed by Rep. Elissa Slotkin (D-Mich.) and Rep. Mikie Sherril (D-N.J.), both members of the House Armed Services Committee, Milley in late August was emphatic that the military would play no role in resolving a disputed election.

"I believe deeply in the principle of an apolitical U.S. military," Milley told lawmakers. "In the event of a dispute over some aspect of the elections, by law U.S. courts and the U.S. Congress are required to resolve any disputes, not the U.S. military. I foresee no role for the U.S armed forces in this process."

As the Associated Press reported last month, Milley "anchored many of his responses" in the U.S. Constitution. "Asked if the military would refuse an order from the president if he was attempting to use military action for political gain rather than national security, Milley said, 'I will not follow an unlawful order.'"

Milley was sharply criticized in June by current and former lawmakers and members of the armed forces for participating in Trump's militarized stunt in which protesters in Lafayette Square near the White House were violently dispersed by the National Guard so that Trump could be photographed holding a bible in front of St. John's Church.

Milley publicly apologized for escorting Trump through the park, much to the chagrin of the president.

According to the Times, in private discussions at the Defense Department about "the possibility of Mr. Trump trying to use any civil unrest around the elections to put his thumb on the scales... several Pentagon officials said that such a move could prompt resignations among many of Mr. Trump's senior generals, starting at the top with General Milley" and likely including General Charles Brown, the Air Force chief of staff.

Earlier this year, Rosa Brooks, a Georgetown University law professor and past Defense Department official under former President Barack Obama, was the head of a bipartisan team of more than 100 former national security officials and election experts who simulated the most significant risks to a peaceful transfer of power.

The Transition Integrity Project stressed that there is "a high degree of likelihood that November's elections will be marked by a chaotic legal and political landscape," and it is likely that Trump will "contest the result by both legal and extra-legal means, in an attempt to hold onto power."

But the analysis highlighted that "these risks can be mitigated," and the report (pdf) states:

The worst outcomes of the exercises are far from a certainty. The purpose of this report is not to frighten, but to spur all stakeholders to action. Our legal rules and political norms don't work unless people are prepared to defend them and to speak out when others violate them. It is incumbent upon elected officials, civil society leaders, and the press to challenge authoritarian actions in the courts, in the media, and in the streets through peaceful protest.

The Times reported that Milley on Thursday during a virtual question-and-answer session with U.S. service members around the world urged them to "keep the Constitution close to your heart."