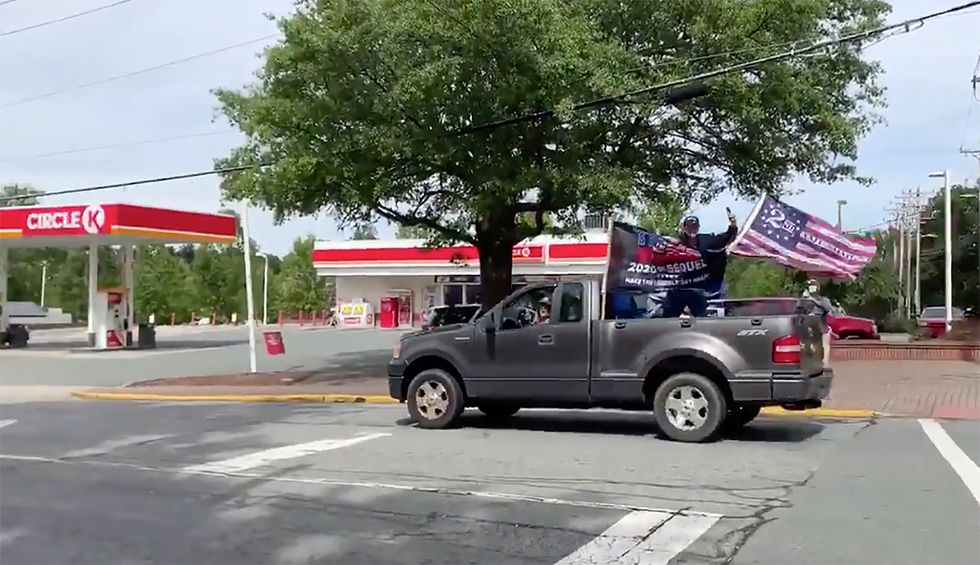 North Carolina is among the swing states that President Donald Trump and his Democratic opponent, former Vice President Joe Biden, will be paying close attention to between now and November 3, and Trump visited the state on Saturday, September 19 for a MAGA rally in Fayetteville. That day, a pro-Trump car parade that included around 200 cars passed through Elon, North Carolina — where, according to the Independent, neo-Confederate Trump supporters shouted “white power” at pedestrians.

The Independent’s Gino Spocchia reports that the pro-Trump car parade was said to have been organized by Alamance County Taking Back Alamance County, a far-right neo-Confederate group founded by extremist Gary Williamson. Megan Squire, who teaches computer science at Elon University and is also a researcher on far-right extremism, filmed the caravan as it passed through the campus and expressed her opposition to it by displaying a Black Lives Matter sign. Upon seeing her sign, one member of the caravan shouted at Squire, “No, they fucking don’t, bitch! Go back home, cunt.”

Another participant in the car parade, Spocchia reports, shouted at Squire, “Fuck black lives” — and another one shouted, “Four more years, bitch.” Squire tweeted that a racist also shouted, “Confederate lives matter” at her.

I'll use this thread to tweet some today about the Alamance County Trump Convoy (co-sponsored by the dregs of neo-C… https://t.co/ikoJvNsn20
— megan squire (@megan squire)1600522791.0

I'll use this thread to tweet some today about the Alamance County Trump Convoy (co-sponsored by the dregs of neo-C… https://t.co/ikoJvNsn20
— megan squire (@megan squire)1600522791.0

Jon Dooley, vice president of student life at Elon University, sent out an e-mail on Sunday, September 20 condemning the car parade and calling for no-trespass orders to be issued against the neo-Confederate participants.

Dooley wrote, “No-trespass orders also allow us to keep a record should we encounter issues in the future. This is our standard procedure when individuals exhibit this kind of behavior.”

In June, Squire was assaulted during an anti-racist protest in Graham, North Carolina. Two neo-Confederate men were arrested following the attack on Squire: Christopher Overman was charged with assault, while Chadwick Hightower was charged with disorderly conduct.