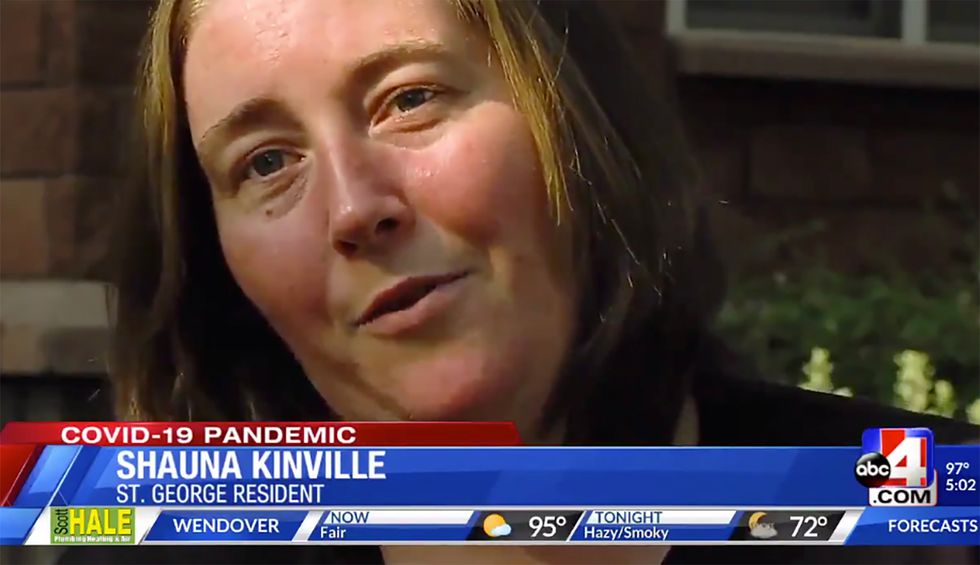 As health experts continue to encourage mask-wearing across the country, some anti-maskers just won’t give up. They have been refusing to wear masks since the start of the pandemic, despite research supporting that masks significantly prevent the spread of COVID-19. In Utah, maskless demonstrators have crowded city sidewalks and school-related meetings to protest mask mandates in and out of schools. In a video that went viral Monday, a woman can be heard comparing the moments leading up to George Floyd’s brutal murder to wearing a mask, in addition to other conspiracy theories.

“George Floyd was saying, ‘I can’t breathe,’ and then he died,” the woman, identified as Shauna Kinville, said. “Now we’re wearing a mask, and we say ‘I can’t breathe’, but we’re being forced to wear them.” The viral video, clipped from a news segment on ABC4 News, is from an anti-mask rally that occurred at a school district building last month. Hundreds of people attended the St. George rally on Aug.17 to protest children wearing masks, days after schools in the county reopened.

Parents gathered to argue that not only was “forcing” children to wear masks unconstitutional but that they were “tired of not being able to live their normal lives,” ABC News reported. In addition to this, rally attendees claimed that even if they have medical issues or health concerns wearing a mask should be their choice, and not up to the government. Some even tried to argue that masks were detrimental to one’s health, despite research proving the benefits of wearing a mask amid a pandemic. But it doesn’t stop there, as one individual connected wearing a mask to child molestation. “Let me tell you why I hate masks, they’re contaminated,” Betty Jake, a protester, said. “And because most child predators, most child molesters love them.”

Utah Gov. Gary Herbert mandated that students wear masks in school in July. Since then parents have protested the safety measure, claiming their children will be smothered, among other theories on lack of social development. School administrators told ABC News that they don’t understand why individuals are protesting the mandate if they want their children to return to school. “They blocked off the front entrance to the school district building, and we went out to ask them to move and they attempted to storm in,” Steven Dunham said. “We want to keep schools open. If a mask is helping protect teachers who are putting themselves at risk, that’s really a small price to pay for them to educate your children.”

Since going viral, the video has garnered a flood of criticism, especially the inappropriate and insensitive comment connecting the Floyd murder to wearing a mask. “Speechless...... She really just sat there and said wearing a mask causes her not to breathe like George Floyd....... This is probably one of the most stupidest things I have ever heard in my life!” one Twitter user said about the video.

Wearing a mask cannot be compared to the violent police brutality that Black folks face. Floyd was brutally murdered by an officer who kneeled on his neck for nearly nine minutes, despite Floyd repeatedly pleading with the officer that he could not breathe. Claiming you have difficulty breathing when wearing a mask does not compare, and it’s beyond inappropriate to tie it to police brutality and racial injustice.

Anti-maskers continue to spread misinformation on the virus, including flawed comparisons to the seasonal flu and the number of deaths associated with it—but comparing wearing a mask to a horrific tragedy is far worse and unacceptable. As the Trump administration continues to downplay the virus and its severity, in addition to spreading false information including how it began, anti-maskers will only be more encouraged to protest. Despite the number of times people call this virus a “hoax,” numbers do not lie. The pandemic is real and deadly.