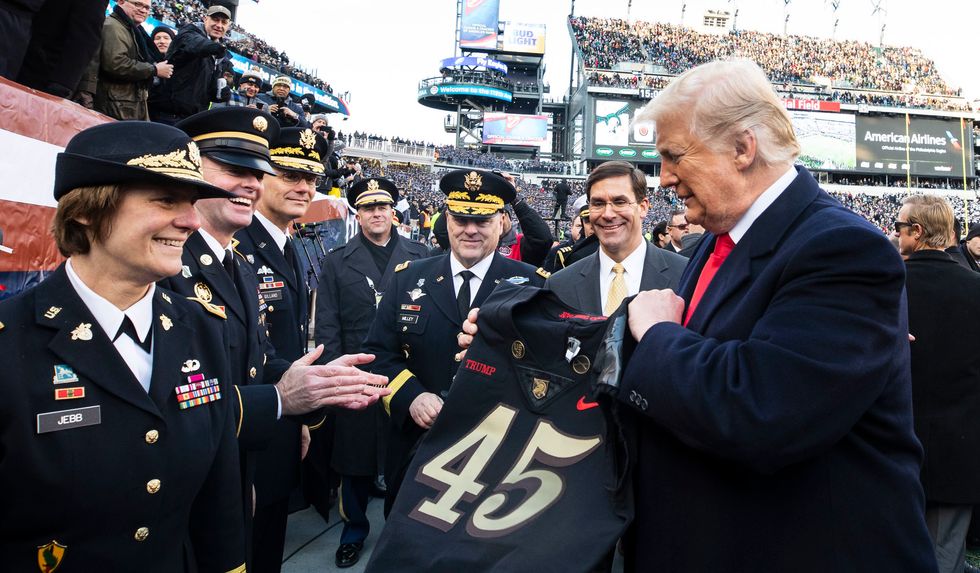 Advocacy organizations representing millions of veterans across the United States voiced disgust and outrage late Thursday in response to reports from multiple news outlets detailing how President Donald Trump has repeatedly disparaged American soldiers killed or wounded in war as "suckers" and "losers" in private while publicly presenting himself as the unrivaled champion of the nation's service members.

The Atlantic, citing anonymous sources with direct knowledge of the president's comments, reported that Trump in 2018 canceled a scheduled visit to the Aisne-Marne American Cemetery near Paris "because he feared his hair would become disheveled in the rain, and because he did not believe it important to honor American war dead."

"This is not surprising, nor is it the first time President Trump has attacked veterans, but it is a new low, even for Trump."

"In a conversation with senior staff members on the morning of the scheduled visit, Trump said, 'Why should I go to that cemetery? It's filled with losers," according to The Atlantic. "In a separate conversation on the same trip, Trump referred to the more than 1,800 marines who lost their lives at Belleau Wood as 'suckers' for getting killed."

The Atlantic additionally reported that during a 2017 visit to Arlington National Cemetery with then-Homeland Security Secretary John Kelly, whose son Robert is buried there, Trump turned to Kelly and said, "I don't get it. What was in it for them?"

"Kelly (who declined to comment for this story) initially believed, people close to him said, that Trump was making a ham-handed reference to the selflessness of America's all-volunteer force," the magazine reported. "But later he came to realize that Trump simply does not understand non-transactional life choices."

The president's reported comments, confirmed by the Associated Press and the Washington Post, were immediately condemned by advocacy groups, lawmakers, and individual veterans as further confirmation that Trump has nothing but contempt for former service members whose lives were taken or severely impacted by overseas wars.

"This is not surprising, nor is it the first time President Trump has attacked veterans, but it is a new low, even for Trump," Will Goodwin, an Army veteran and director of government relations for advocacy group VoteVets, said in a statement. "There is no rhyme or reason for Trump to cruelly attack our nation's fallen heroes. And it is especially egregious given that he's the commander in chief of our Armed Forces."

The Union Veterans Council, a national labor organization, called Trump "a national disgrace" in the wake of The Atlantic's reporting. Alexander McCoy, political director of Common Defense, which represents millions of veterans across the U.S., also weighed in on Twitter:

In a series of tweets late Thursday, Trump denied the comments attributed to him in The Atlantic, writing—falsely—that he never called late Republican Sen. John McCain a "loser."

Trump went on to write that he swears "on whatever, or whoever, I was asked to swear on, that I never called our great fallen soldiers anything other than HEROES," a denial that critics found thoroughly unconvincing.

"This is more made up Fake News given by disgusting and jealous failures in a disgraceful attempt to influence the 2020 Election!" the president added.

In a statement, Democratic presidential nominee Joe Biden, whose late son Beau was an Iraq War veteran, said that "if the revelations in today's Atlantic article are true, then they are yet another marker of how deeply President Trump and I disagree about the role of the president of the United States."

"I have long said that, as a nation, we have many obligations, but we only have one truly sacred obligation—to prepare and equip those we send into harm's way, and to care for them and their families, both while they are deployed and after they return home," Biden added.