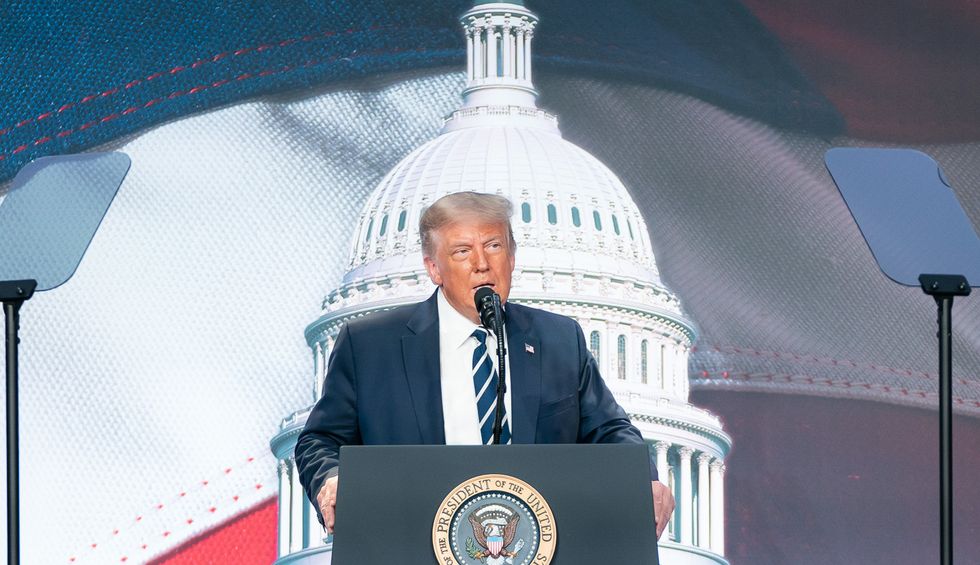 An order from the Trump administration's Office of Management and Budget to identify and end funding for federal worker diversity trainings meant to combat bigotry and systemic bias with government institutions and agencies was met with condemnation Saturday after a memo declared that "critical race theory" and other anti-racism constructs "should have no place in the Federal government."

OMB Director Russell Vought says Trump has asked him to prevent federal agencies from spending millions in taxpayer dollars on these training sessions. Vought says OMB will instruct federal agencies to come up with a list of all contracts related to training sessions involving "white privilege" or "critical race theory," and do everything possible within the law to cancel those contracts, the memo states.

The memo, released on Friday, also tells all federal agencies to identify and if possible cancel contracts that involve teaching that America is an "inherently racist or evil country."

The memo (pdf) written by Vought specifically characterizes "critical race theory"—which by definition is simply a theoretical framework for social scientists who explore the ways in which racial identities and racism impact society and culture—as "divisive, false, and demeaning propaganda" that "should have no place in the Federal government."

The reaction of condemnation arrived swiftly.

"Our nation stands at an inflection point as communities are grappling with the ongoing threat of racism, white supremacy and police violence," Clarke said in Saturday statement. "President Trump's latest federal directive is an attempt to discredit, condemn and silence important conversations happening in communities and workplaces about anti-racism and about our nation's history of white supremacy. By banning government support for these discussions, he sends a dangerous message to the country that racism is a fallacy."

Throughout Trump's term, Clarke continued, the president "has made racist statements about Blacks, Latinos and immigrants conveying deep racial animus. His nominees to the federal courts have been overwhelmingly white and male. If there is one place where we need comprehensive discussion and training around anti-racism, it's inside the halls of the White House and across every level of our federal government."

Will they soon be eliminating Civil Rights offices in federal agencies too? This is downright disgraceful. https://t.co/DU6MC1dhLy
— Joel Rubin (@Joel Rubin)1599268535.0

The Vought memo comes as the nation continues to experience a popular uprising against racial injustice and police violence kicked off earlier this year in the wake of the killing by Minneapolis officers of George Floyd—a protest movement that has continued amid the more recent police shooting of Jacob Blake in Kenosha, Wisconsin last month and other similar cases.

As the Guardian notes:

Trump has spent much of the summer defending the display of the Confederate battle flag and monuments of civil war rebels from protesters seeking their removal, in what he has called a "culture war" ahead of the 3 November election.

Meanwhile, he has rejected comments from the Democratic nominee, Joe Biden, and others that there is "systemic racism" in policing and American culture that must be addressed.

"187,000 Americans are dead from Covid-19," tweeted Paul Waldman, senior write for The American Prospect and a Post contributor, in response to the story, "and the White House is spending its time making sure no one in the government gets sensitivity training."