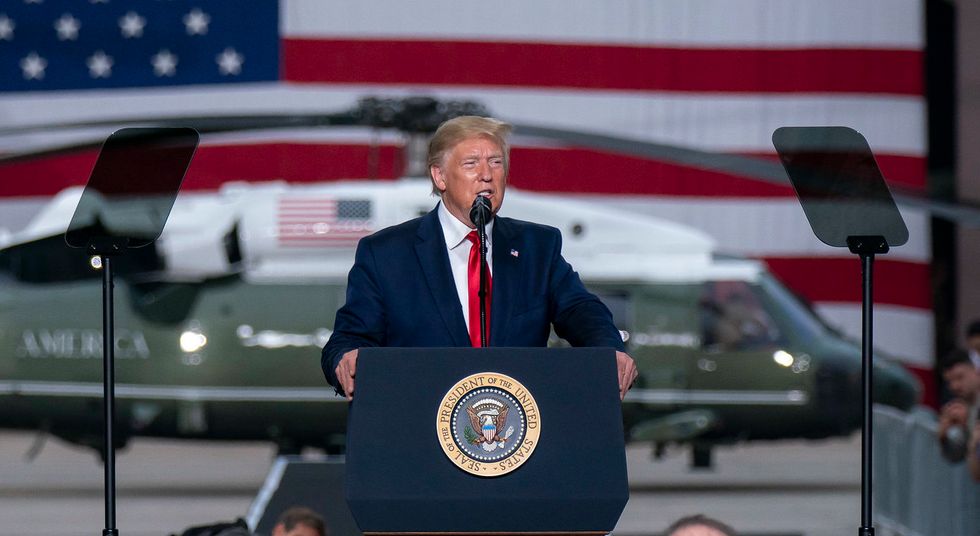 President Donald Trump has convinced Republican isolationists and hawks that he supports their views. That’s a neat trick, since the two groups hold opposing positions.

Trump gets support from hardline interventionists for his efforts to overthrow governments in Iran and Venezuela, while backing the aggressive policies of Israeli Prime Minister Benjamin Netanyahu.

In a speech for the Republican National Convention that was recorded in Jerusalem, Secretary of State Mike Pompeo claimed Americans “are more safe, and their freedoms more secure, because President Trump has put his America First vision into action. It may not have made him popular in every foreign capital, but it has worked.”

"While Trump hasn't halted any Middle East wars, he has ordered modest troop reductions in Syria and Iraq, and negotiated a fraught agreement in Afghanistan. However, on any given day, the US has 45,000-65,000 soldiers and sailors stationed in the Middle East, more than at the beginning of Trump's term."

On the other hand, libertarian Senator Rand Paul, Republican of Kentucky, describes Trump as the first President in a generation “to seek to end war rather than start one.” Paul went on to tell the Republican National Convention that “We must not continue to leave our blood and treasure in Middle East quagmires.”

While Trump hasn’t halted any Middle East wars, he has ordered modest troop reductions in Syria and Iraq, and negotiated a fraught agreement in Afghanistan. However, on any given day, the US has 45,000-65,000 soldiers and sailors stationed in the Middle East, more than at the beginning of Trump’s term.

So Trump pursues interventionism in practice while claiming he’s against the forever wars. He purposely takes contradictory positions, according to Scott Horton, a libertarian Internet radio host and editorial director of AntiWar.com. [Disclosure: “Foreign Correspondent” is carried by AntiWar.com.]

“He takes all sides of all issues, so there’s something for everyone,” Horton says in an interview. “Trump is seen as outside the political establishment. He’s a disruptor.”

In reality, Horton says, Trump’s foreign policy has been a disaster. He escalated the air war in Afghanistan and the war in Yemen. He escalated fighting in Somalia. NATO added new members from Eastern Europe and increased spending. As Horton dryly puts it, “He hasn’t started any new wars because we already at war with every country we could be at war with.”

Trump doesn’t adhere to any particular ideology, according to Stephen Zunes, professor of politics at the University of San Francisco. Rather he makes impulsive, transactional decisions.

“I don’t think Trump has a coherent foreign policy,” Zunes tells me. “The Trump Doctrine can be summed up as ‘What’s in it for me?’ ”

Trump’s past attempts to break with some interventionist policies was met with strong opposition from the foreign policy establishment and ultimately floundered.

In 2018, Trump opened direct talks with North Korean leader Kim Jong-un. By 2019, the administration indicated it could accept North Korea as a nuclear power, as part of negotiations toward a comprehensive peace accord.

Hawks in both parties attacked Trump for cozying up to a dictator. Trump’s advisors, such as uber-hawk former National Security Advisor John Bolton, opposed any agreement. Trump backed off when it became apparent his image was being tarnished.

Now Trump is having trouble making deals even with his own Pentagon brass. A recent scathing article in The Atlantic quotes military leaders and advisors who say Trump disparaged Marines buried at a World War I cemetery as “suckers” for getting killed.

That’s consistent with his public attacks on the late Senator John McCain as a “loser” because he was captured during the Vietnam War.

On Labor Day, Trump held a press conference that set a new low bar. The Commander in Chief denied making the disparaging remarks, then opened fire on Pentagon leaders.

Top military leaders, Trump said, “want to do nothing but fight wars so that all of those wonderful companies that make the bombs and make the planes and make everything else stay happy.”

Once again, Trump strikes a populist stance to attack others while ignoring his own, far worse record. The President regularly boasts of his success in promoting arms sales, notably to dictatorships such as Saudi Arabia. He has surrounded himself with military men tied to the arms industry, including current Secretary of Defense Mark Esper, a former Raytheon lobbyist.

Apparently you’re not part of the military-industrial complex until you disagree with Trump.

My guess is that some military brass are leaking stories about Trump to thwart his possible use of the Insurrection Act to mobilize regular troops after a Trump loss in the November election. If the election is close, and demonstrations break out, Trump could violate the Constitution and use the military to stay in power. The leaks are coming from those generals who won’t play ball.

Most Americans oppose the wars in Iraq and Afghanistan. That’s why Trump is ramping up his anti-interventionist rhetoric, trying to outflank Joe Biden from the left. But many independents and even some Republicans recognize Trump’s rhetoric as phony.

Meanwhile, Trump has angered the foreign policy establishment—both Democratic and Republican—for questioning US participation in  NATO and being “soft on Russia.” Seventy Republican national security officials signed an open letter criticizing Trump and declaring their intention to vote for Joe Biden.

“The power elite is terrified of him because he is not one of them,” says radio host Horton. “They’ve gone to war against him.”

But that doesn’t necessarily translate into votes for Biden. Professor Zunes says the foreign policy experts themselves are upper-middle-class, mainstream Protestants, who don’t have much mass influence.

“Biden may take a small chunk out of Trump’s Episcopalian vote,” says Zunes. “They don’t represent many actual votes in key states that Biden will have to win.”

Zunes, a strong critic of Biden’s interventionist foreign policy, says Biden is still better than Trump. Biden voted against the 1991 Gulf War, and opposed the wars in Libya and Yemen.

Most importantly, Zunes says, Biden is more malleable and subject to grassroots pressure.

“Biden may be forced to take more seriously the anti-war majority in the Democratic Party,” he says.

Reese Erlich's syndicated column, Foreign Correspondent, appears every two weeks. His book The Iran Agenda Today: The Real Story from Inside Iran and What's Wrong with US Policy ­will be published in October. See his website or follow him on Twitter: @ReeseErlich