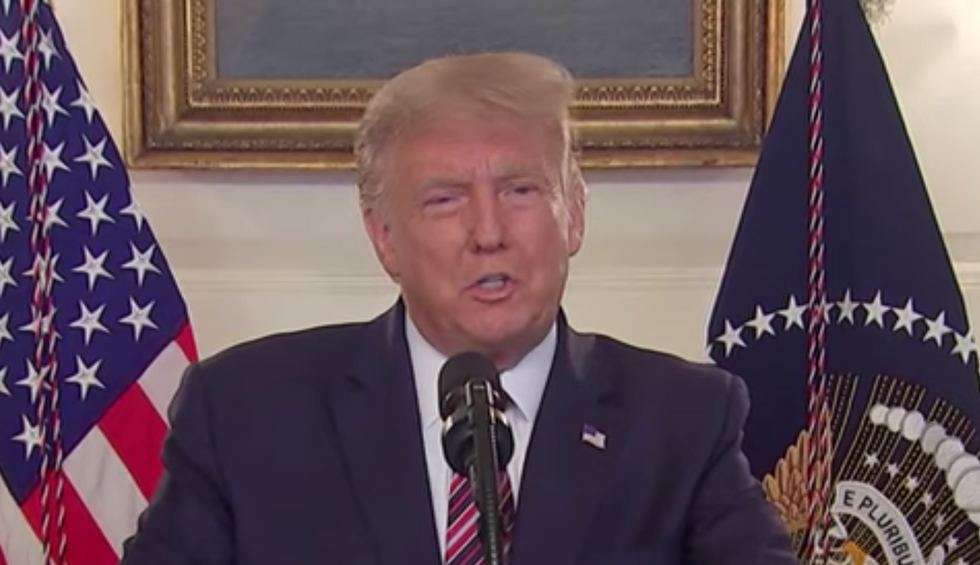 When confronted on Wednesday with the most explosive detail yet released from Bob Woodward's upcoming book, President Donald Trump couldn't even muster a "fake news."

How could he, after all, when his words are on tape? Woodward released a recording on Wednesday of Trump admitting on Feb. 7 that the virus was "deadly stuff." In a later tape, on March 19, Trump said: "I wanted to always play it down. I still like playing it down, because I don’t want to create a panic." This comports with the history anyone paying attention at the time can remember. For about two months, Trump refused to take the virus seriously at all. During that time, it gained a strong foothold in the country that has yet to weaken.

Trump essentially admitted it outright, offering excuses for his deception.

"Well, I think if you said 'in order to reduce panic,' perhaps that's so," he said. "The fact is, I'm a cheerleader for this country. I love our country. And I don't want people to be frightened. I don't want to 'create panic,' as you say. And certainly, I'm not going to drive this country or the world into a frenzy. We want to show confidence, we want to show strength, we want to show strength as a nation. And that's what I've done. And we've done very well. We've done well from any standard. You look at our numbers compared to other countries, other parts of the world. It's been an amazing job that we've done."

This answer was a disaster on multiple levels.

First, the numbers are not good. The United States has the highest total death count from the virus of any country in the world and ranks near the top of countries in deaths per capita. There's no spinning these numbers into a positive story.

He also hasn't done a good job according to standard he set himself. On Feb. 26, Trump said the country was doing  a good job because it only had "15" cases, which would soon drop to zero.

"When you have 15 people, and the 15 within a couple of days is going to be down to close to zero, that’s a pretty good job we’ve done," he said.

One has to infer that by that standard, having millions more cases is a pretty bad job. Even as it got more serious, Trump has repeatedly ratcheted up the final American death toll he expected from the pandemic. On April 20, he said between 50,000 and 60,000. On May 1, he said, "We will 'hopefully' finish under 100,000 deaths." Eventually, he stopped making these predictions. We're now on track to surpass 200,000 deaths shortly.

Second, by admitting that he misled the country, he violates a core tenet of public health messaging. The public needs to be able to trust officials to tell the truth, so the government should avoid misleading the people about a public health threat — even if it seems to be good in the short run. But Trump is making it clear that he thinks it's fine to mislead the country about a serious threat, a position that only ensures the public will have less faith in its government when needed.

Third, his admission directly contradicted White House Press Secretary Kayleigh McEnany's defense of the president earlier in the day. She had claimed, absurdly, that the president never downplayed the virus.

Fourth, Trump's defense of his deception doesn't hold any water. While preventing panic is usually a laudable goal, it's almost never been Trump's goal. During the Ebola outbreak when President Barack Obama was in office, Trump was constantly hyping the threat, despite the relatively low risk to the United States. And many pointed out that as a candidate and as president, instilling fear and panic has been a key part of his repertoire.

In 2016, he lied about terrorism, unemployment, and crime. To bolster his party's chances in the 2018 election, Trump desperately tried to whip up panic about a caravan of migrants coming to the U.S.-Mexican border — though it never posed any real threat to the country. And he's also been trying to inspire fear of antifa and left-wing protesters in 2020, despite a significantly bigger threat from right-wing terrorists.

He even told Woodward in an interview for his first book, in a quote that inspired the book's title: "Real power is — I don’t even want to use the word — fear."

He's not opposed to fear and panic at all. He just wants to be in control of what people fear, so he can best use the emotion to his advantage. And he's already admitting that he'll manipulate the entire country when he thinks it suits his aims.