Trump attacks his own CDC director's claims about coronavirus vaccines 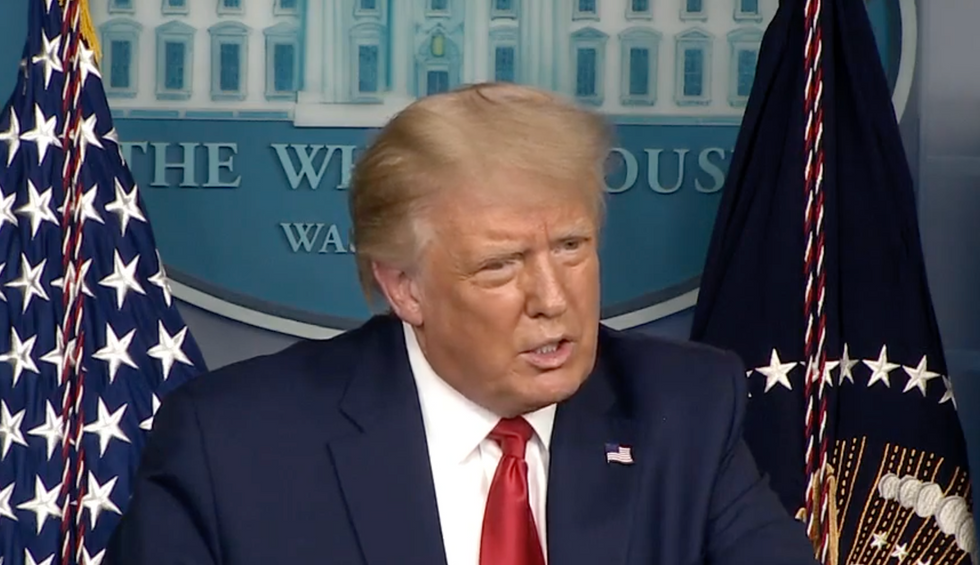 As the administration faced doubts about the integrity of its approval process for a coronavirus vaccine, President Donald Trump went on the attack Wednesday against CDC Director Robert Redfield's claims on the topic in a congressional hearing.

Trump contradicted Redfield's remarks about the timeline for distributing the vaccine, saying one should be approved in October or November and distributed rapidly and widely thereafter. He also disputed Redfield's claim that a mask could be more protective against catching the coronavirus than a vaccine.

There's no reason to believe Trump has superior knowledge over his administration's own experts — instead, it's much more likely that he is intentionally lying about the vaccine's potential for his own political advantage. He has made it clear that he wants to see a vaccine approved before the November election, which has triggered fears that the administration will inappropriately and dangerously allow these political considerations to shape the approval process. Trump and his aides have already been steering and reshaping the administration's actions and messaging on the coronavirus to reflect his preferred rhetoric rather than the science.

Redfield told Congress on Thursday that a vaccine may be approved by the end of the year, but it will only be available at that time for a narrow group of people.

"There will be a vaccine that will initially be available sometime between November and December, but very limited supply and will have to be prioritized," he told lawmakers. "If you're asking me when is it going to be generally available to the American public so we can begin to take advantage of vaccine to get back to our regular life, I think we're probably looking at late second quarter, third quarter 2021."

He also stressed why a mask can be superior to a vaccine: "I might even go so far as to say that this face mask is more guaranteed to protect me against Covid than when I take a Covid vaccine, because the immunogenicity may be 70%. And if I don't get an immune response, the vaccine is not going to protect me. This face mask will."

But Trump didn't like these answers, telling reporters Wednesday evening that Redfield was "confused" — even though his answers were clear and straightforward.

"I think he made a mistake when he said that," Trump said. "It's just incorrect information."

He added: "As far as the mask is concerned, he made a mistake."

Trump tried to cast doubt on the usefulness of masks, saying they have "problems" too. While this was initially claimed by public health experts, the scientific consensus has now decisively shifted toward the conclusion that masks are one of the best tools for preventing spread of the virus. By refusing to acknowledge that, Trump is helping the virus spread.

A reporter pushed back on Trump's contradictions of the CDC director, and the president lashed out.

"I told you — I don't have to go through this," Trump said. "I think he misunderstood the questions. But I'm telling you, here's the bottom line: Distribution's going to be very rapid. He may not know that."

"Under no circumstances will it be as late as the doctor said," he claimed.

Dr. Scott Atlas, a new coronavirus adviser Trump brought on because he's an ideological ally, appeared at the press conference and tried to lend support to the president's distortions. But in fact, he contradicted the president. While Trump said the vaccine would "immediately" get "full" distribution as soon as it was approved, Atlas acknowledged that high-risk groups would be prioritized first. (Though it should be clear that all of this remains hypothetical because no vaccine has yet been approved, even though experts are hopeful.)

Former Vice President Joe Biden, who has been saying he's concerned about the politicization of science but would trust expert opinion on vaccines, responded to Trump's dangerous attack on the CDC: