Trump faceplants with a scientifically illiterate claim about climate change 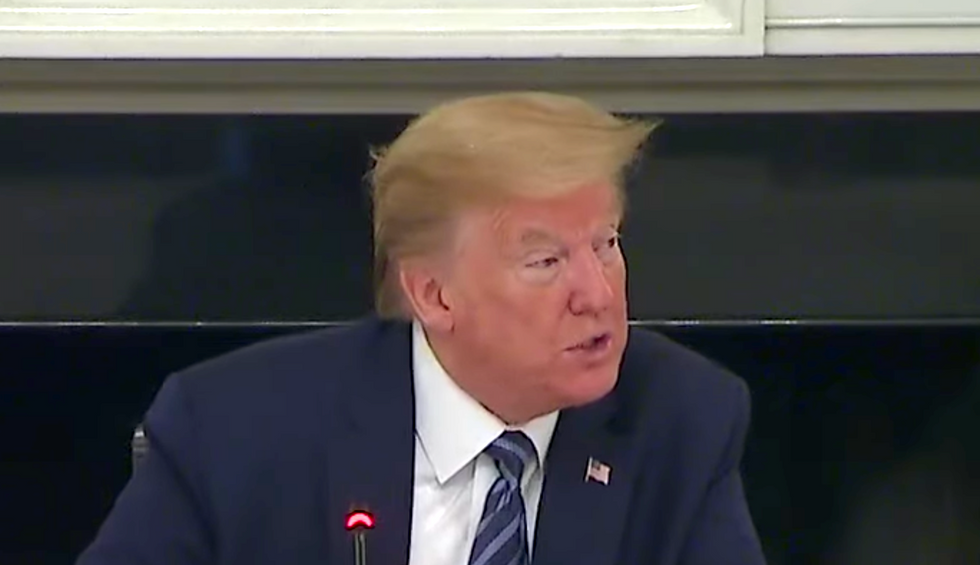 President Donald Trump refused to accept the scientific consensus on the existence of climate change at a meeting about the California wildfires, preferring to blame the crisis on poor forest management.

California Nartural Resources Secretary Wade Crowfoot spoke about the issue, addressing the president directly and calling out the need for federal leadership.

"As the governor said, we've had temperatures explode this summer. You may have learned that we broke a world record in the Death Vallery, 130 degrees," he said.

At this point, Trump smirked and look away from Crowfoot.

"But even in greater LA, 120-plus degrees. And we're seeing the warming trend make our summers warmer, but also our winters warmer as well," Crow foot continued. "So I think one area of mutual agreement and priority is vegetation management. But I think we want to work with you to really recognize the changing climate and what it means to our forests. And actually work together with that science, that science is going to be key. Because if we ignor that science and put our heads in the sand and think it's all about vegetation management, we're not going to succeed together protecting California."

"I wish science agreed with you," said Crowfoot.

It's was an embarrassing display of ignorance. The science of climate change is extremely well-established, and while uncertainty remains, the trend we've been headed in is clear. As the chart from NASA below shows, the increase in temperatures is a decades-long trend scientists have observed since the '60s.

“The decade that just ended is clearly the warmest decade on record,” NASA’s Goddard Institute for Space Studies Director Gavin Schmidt said in January in a statement naming 2019 as the second-warmest year ever recorded. “Every decade since the 1960s clearly has been warmer than the one before.”

Trump's comments were particularly galling because he claimed to know the temperatures will actually get cooler. This is bolder than even many climate denialists, who often say that future temperatures are wildly uncertain. No, Trump's claim is not only that climate scientists have no idea what they're talking about, but that he somehow has enough information that contradicts the profession's broad consensus. It requires a stunning level of arrogance to make this claim.

But it is consistent with what Trump has probably been hearing on Fox News. Host Tucker Carlson has repeatedly cast doubt on climate change, including in connection with the California wildfires. In a recent broadcast, he said: "So are we climate change deniers if we point out that the state of California has failed to implement meaningful deforestation measures that might've dramatically slowed the spread of these wildfires? Does that make us deniers? Because in 2018, a state oversight agency in California found that years of poor or non-existent forest management policies in the Sierra Nevada Forests, had contributed to the fires."

Carlson didn't mention, however, that the very report he was referring to explicitly listed poor management policies alongside climate change as the key causes of the criris.