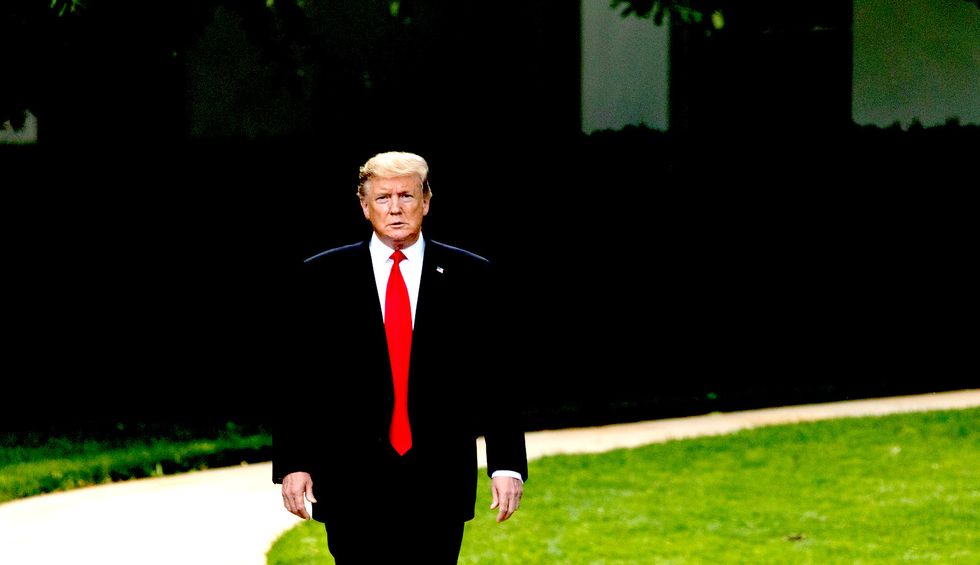 President Donald J. Trump walks from the Oval Office to the South Lawn of the White House Monday, May 20, 2019, prior to boarding Marine One to begin his trip to Pennsylvania. (Official White House Photo by Joyce N. Boghosian)
Alex Henderson
September 11, 2020

As chaotic as the presidential election was in 2000 — when Americans went for weeks without knowing whether the winner was Democratic Vice President Al Gore or Republican Texas Gov. George W. Bush — many pundits fear that this year could be even worse. There are many reasons to be concerned, including the pandemic, civil unrest, foreign interference, and GOP efforts to undermine voting. David Dayen, executive editor of the American Prospect, discusses some of his election fears in an article published this week and explains why he is so worried about what could happen on and after November 3.

"This is a horror story," he begins.

“The 78 days from November 3 to January 20, known as the transition, have kept me awake at night since I started reporting out this article,” Dayen explains. “The coming interregnum is likely to be one of the most politically, economically and socially fraught periods in American history — one that could set the trajectory for the nation’s future.”

This year, Dayen warns, casting a ballot could be especially difficult.

“Democrats have rightly preoccupied themselves with what will happen before November 3, not just by persuading voters, but by making sure they can overcome barriers to participation: the slowdown of the mail, Trump’s threats to place 50,000 poll watchers — and even law enforcement — at the polls, and the extra costs of running a safe election in a pandemic,” Dayen writes. “Layer that on top of the usual voter-suppression tactics, and just casting a ballot may feel like surmounting an obstacle course.”

One of Dayen’s concerns is that on Election Night, Trump will declare victory before all the votes are counted.

“Surveys show that more Democrats plan to vote by mail than Republicans,” Dayen explains. “No matter the true outcome, you can expect Trump to declare victory, but especially if he leads on Election Night and then falls behind. Losing an early lead with late-arriving mail ballots feeds into Trump’s stated contention that the only way he can be defeated is if the election is rigged against him. Some Democrats have encouraged early voting to prevent this scenario.”

Another fear, Dayen adds, is the “possibility” that the U.S. Department of Justice will “step in and demand that ballot-counting stop."

And Dayen notes that election law expert Rick Hasen has warned: “Rather than just litigate, what if Trump tries to convince a Republican (state) legislature to take back their power under the Constitution to appoint electors directly? They would be canceling the election for president and picking the president themselves.”

Dayen writes, “This is theoretically constitutional, in that each state has the power to choose electors…. Does anyone believe that Trump couldn’t convince Republican state legislators to act on his behalf and overturn the election process? It’s not clear whether governors could veto a legislature wresting control of electors. But Arizona and Florida, two key battleground states, are controlled by Republicans at all levels; so, there wouldn’t necessarily be a check on this activity. In Wisconsin, Pennsylvania and Michigan, Republicans control the legislature, but Democrats hold the governor’s mansion; there, you could see competing slates of electors, one from each branch of government.”

The Prospect editor goes on to describe another nightmare scenario: Trump refusing to leave the White House.

“Even if a contested election ends in Biden’s favor,” Dayen explains, “Trump could, in theory, refuse to leave the White House — or invoke some dubious ‘emergency action,’ as House Majority Whip Jim Clyburn theorized — to stay in power. The timelines are constitutionally clear: the term of office ends on January 20, and the president would move from the commander-in-chief to an unauthorized houseguest as the clock struck 12 noon. But that would be uncharted territory for the nation — and a crisis not seen since the union broke apart in the winter of 1860-1861.”