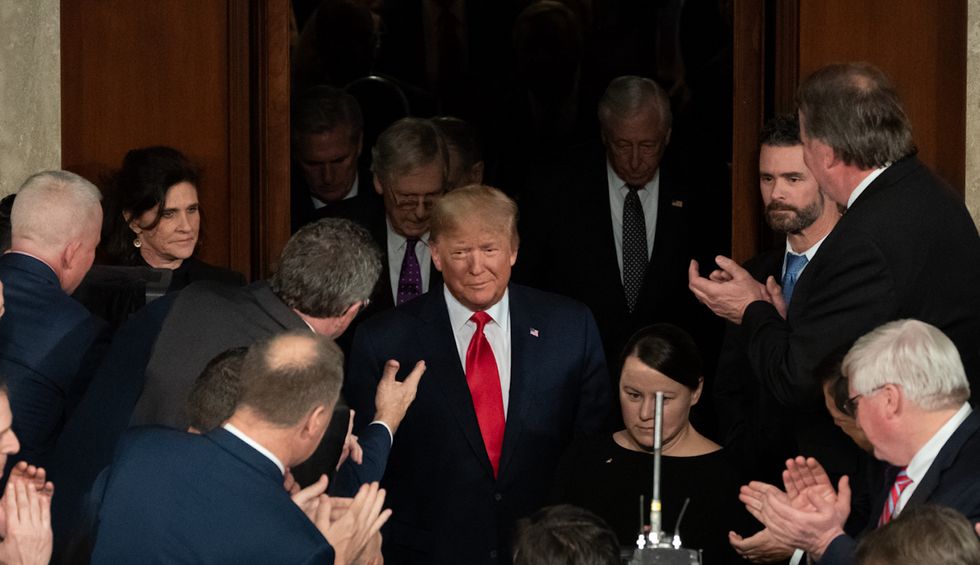 President Donald J. Trump arrives in the House chamber and is greeted by members of Congress prior to delivering his State of the Union address Tuesday, Feb. 4, at the U.S. Capitol in Washington, D.C. (Official White House Photo by Andrea Hanks)
Amanda Marcotte
and
Salon
September 17, 2020Bank

There has been a ton of news about Bill Barr — official title, "Attorney General of the United States;" actual job, Donald Trump's capo — crawling across cable news chyrons in recent days, so much so that it's hard to keep track of it all. There's that thing he said about quarantine restrictions being nearly as bad as slavery. And the thing where he whined about the Justice Department staffers that's more interested in enforcing the law than protecting Trump's political power. And where he compared such people to preschool children, for having the temerity to question his decisions.

All that is bad, but probably the worst news this week is a report from the New York Times that "Barr told federal prosecutors in a call last week that they should consider charging rioters and others who had committed violent crimes at protests in recent months with sedition."

He also asked federal prosecutors "to explore whether they could bring criminal charges against Mayor Jenny Durkan of Seattle for allowing some residents to establish a police-free protest zone near the city's downtown for weeks this summer."

This is especially alarming in light of Barr's assertion, in the same speech where he made offensive comments about his own staff and about slavery, that he believes he has "virtually unchecked discretion" in determining what cases to prosecute.

Barr was talking about cases stemming from the protests in various cities over the summer. Although the vast majority of those protests were peaceful, there were a few incidents of violence and looting, though absolutely no evidence of plots to overthrow the U.S. government (which is what "sedition" means). Barr's eagerness to overreact, however, is another alarming sign that he is exploring ways to assist Trump's public and obvious plans to do whatever he can to steal the presidential election.

Thursday morning, in the midst of one of his lengthy morning Twitter tantrums, Trump hinted yet again at his plans to use phony claims about "fraud" as cover to keep election officials from counting all the ballots after Election Day:

Because of the new and unprecedented massive amount of unsolicited ballots which will be sent to “voters”, or where… https://t.co/LEGxsPoXdz
— Donald J. Trump (@Donald J. Trump) 1600342578

It's a muddled mess of a tweet, but basically, he's using scare quotes to suggest that votes by mail, at least by Democrats, are illegitimate. He's also, in his usual manner, accusing his opponents of doing what he's clearly planning to do, which in this case is to keep the ballots from being accurately tallied.

This is where Barr's dark talk of "sedition" comes in. Should the votes in swing states be close — and every indication from polling is they will be — Trump will likely try to declare victory on the night of the election. After that, there will be a massive battle, as happened under similar circumstances in 2000, over how and whether to count all those mail-in ballots. Much of that will be in the courts, but there will be a street component, as well, as pro-democracy protesters will hit the streets to demand a full vote count, and election officials could face efforts to physically stop them from counting votes.

It's increasingly clear that putting down those anticipated protesters and stopping the vote count is a priority for Trump and his allies. So there's increasing talk from prominent Trump allies of a possible "insurrection" by the left after Election Day, and the need to use maximum force to put it down.

Michael Caputo, a 2016 Trump campaign aide and bug-eyed right-wing conspiracy theorist who was given the job of assistant secretary for public affairs at Health and Human Services, recently made news for a truly wacky set of utterances during a recent Facebook Live event. Among other things, Caputo accused government scientists of, yep, "sedition" and accused the left of plotting an insurrection, recommending that right-wingers "buy ammunition, ladies and gentlemen, because it's going to be hard to get."

A wave of bad press compelled Caputo to take a leave of absence from his government job, citing vague medical concerns, but what he said directly echoes the rhetoric of Roger Stone, his longtime friend and fellow Trump confidant. Stone recently saw his sentence for felonies related to his role in the Russian conspiracy to undermine the 2016 election commuted by Trump, and has been at the forefront of trying to characterize efforts to count all the votes as an "insurrection" to be suppressed with violence.

During a segment on Infowars last week, Stone suggested that Trump should invoke the Insurrection Act or declare martial law and that early voting and mail-in ballots in Nevada "should be seized by federal marshals and taken from the state" to keep them from being counted. Stone claimed such ballots were fraudulent, but of course the real concern is that they're legitimate — and that far too many of them will be cast for Joe Biden.

On Tuesday, Mark Levin — who is currently a radio TV host, but formerly worked with Barr at the Justice Department during the Reagan/Bush years — warned that the protests from the summer will "multiply by five or 10" and that Trump should declare them insurrections because they "need to be put down."

Levin was being vague about what he thinks might provoke such enormous protests, but it's not hard to see what upcoming event might do such a thing: A close election that Trump will try to steal by suppressing vote-counting.

None of this, it cannot be stated strongly enough, is true. It's a shameless pretext for what is likely an upcoming fight to get those ballots thrown out.

It's tempting to see all this talk of "insurrection" and "sedition" from the right — including Trump's own government officials — as nothing more than hyperbole from Republicans who are emotionally overwrought in the face of what looks to be a lost election. Unfortunately, as the scandal around slowdowns at the U.S. Postal Service and lawsuits over mail-in voting make clear, the Trump administration is doing more than talk. It's actively pulling whatever levers it can to keep Democratic votes from being counted this November.

Once those ballots have been cast, the fight to make sure they're counted is going to get rough — not just in the courts, but in the streets. Much could depend on the ability of the left to hit the streets, not just in protests to put pressure on election officials to finish the vote count, but possibly to physically protect officials who are counting votes from armed right-wingers whom Trump has whipped into a frenzy. All this chatter about "insurrection," "riots" and "sedition" is an effort to preemptively characterize pro-democracy protesters as a threat, and to justify using violence to suppress them.