The nation's worst COVID governor? Trump superfan Kristi Noem is a rising GOP star — but she may have mismanaged the crisis worst of all 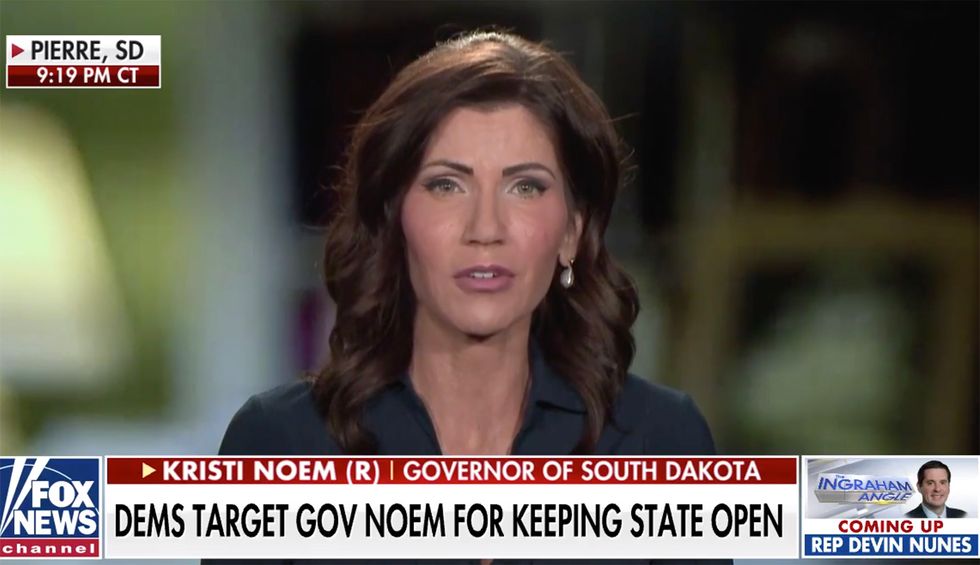 South Dakota Gov. Kristi Noem, a Republican who is the first woman to lead that rural and sparsely populated state, is taking her turn in the national hot seat as the Mount Rushmore State has become the nation's latest coronavirus "hot spot."  In distinctly Trump-like fashion, the Trump-friendly Noem has turned to right-wing outlets like Fox News to lash out at critical media coverage and rail against an "elite class of so-called experts." But as was the case with Florida's Ron DeSantis, Georgia's Brian Kemp and Arizona's Doug Ducey, conservative media has rushed to circle the wagons around Noem just as the fuller picture of her failed handling of the coronavirus crisis becomes clearer.

South Dakota is now considered in the "red zone" for COVID-19 cases after ranking as the second-worst-hit state in the nation for new cases and test positivity per capita over the last two weeks, according to the latest document prepared for governors by the White House Coronavirus Task Force. But Noem is one of 14 Republican governors who have ignored the task force guidelines to curb the spread of COVID-19, even as the White House says that increasing case counts in South Dakota and "remarkably high" test positivity are "deeply concerning" given insufficient testing levels in the state.

While the World Health Organization's benchmark for business re-openings is a 5% rate of positive tests, South Dakota has seen a positivity rate above 10% since Aug. 16. Both daily active cases and hospitalizations have more than doubled in South Dakota since the start of August, and no other state has seen such a rapid expansion rate. Over the past week, there have been an average of 236 confirmed cases per day, an increase of 48% from the average only two weeks earlier. That's out of a total state population of roughly 885,000, which ranks 46th in the nation.

Despite such troubling trends, Noem is among the few state governors who never imposed a shelter-in-place order. Her administration has refused to impose any restrictions on businesses or public activities, contrary to calls from South Dakota's largest medical association. And Noem has resisted issuing a face-mask mandate — even though guidelines from the Centers for Disease Control and Prevention have said for months that everyone should wear a facial covering while in public to help curb the spread of the coronavirus. She's even encouraged parents to send their kids back to school "without masks." As of the end of August, more than 550 people had been infected at the state's universities, with another 200 cases recently reported in K-12 schools.

Noem initially attempted to conceal the latest statistics out of her state. When the Argus Leader, the daily newspaper in Sioux Falls, requested a copy of the weekly reports sent to the state health department from the White House task force, Noem's office refused. When Trump repeatedly touted the drug hydroxychloroquine as a potential COVID remedy, Noem was was among the first to launch a trial of the unproven drug, which was later quietly dropped.

Noem's public rhetoric also has a distinctively Trumpian flavor. She recently asserted that "about 95% of the population ... is not at risk for serious infection" and announced that "South Dakota is open for business" after four workers at a Smithfield Foods meatpacking plant in the state died and another 48 were hospitalized. She made a big show out of not requiring social distancing or masks at Trump's pre-Fourth of July event at Mount Rushmore, appearing on Fox News with host Laura Ingraham to brag about the lack of safety precautions. The state reversed its longstanding fireworks ban and spent $1.5 million on the event. Noem reportedly even gifted Trump with "a four-foot replica of Mount Rushmore that included a fifth presidential likeness: his." In return, the president flew her back to Washington aboard Air Force One.

Noem has been tying herself ever more closely to the president since narrowly winning election in 2018 — after a last-minute campaign push by Trump and Vice President Mike Pence helped her edge out her Democratic challenger in the closest South Dakota governor's race in decades. Noem won a congressional seat in the Tea Party Republican wave of 2010, and served as her state's sole House member for eight years, but only won 51% of the vote against Democrat Billie Sutton in what is generally a die-hard red state.

More recently, Noem — who counts onetime Trump campaign manager Corey Lewandowski as a top adviser — has embarked on a multi-state campaign tour as an official surrogate for Trump's re-election campaign. During the pandemic, she has traveled to Republican events in states like Ohio and Iowa, in the latter state finding a kindred spirit in Republican Gov. Kim Reynolds, who has also resisted a statewide mask mandate in the face of official recommendations amid a surge in cases. The 48-year-old Noem clearly aims to become a national right-wing star, and has spent $130,000 in taxpayer funds to build a studio in the basement of the State Capitol for her frequent Fox News appearances — including one this past week to defend her decision to promote the Sturgis Motorcycle Rally, one of the largest public events held since the start of this pandemic.

More than 460,000 people from across North America descended on the small city of Sturgis, in western South Dakota, for the 10-day rally that ran Aug. 7-16. That came even after the city council surveyed local residents and found that more than 62% opposed holding the rally. Sturgis officials went forward anyway, unable to say no to the $800 million in revenue the rally generates.

Most bikers and enthusiasts who attended the event did not wear masks or practice social distancing, as the Associated Press reported at the time. South Dakota shot up to No. 2 in the country in per capita cases shortly thereafter. It's hard to conclude that's merely a coincidence. As of last week, the AP had identified 290 cases in 12 states tied to the rally. In South Dakota, 118 residents who attended the rally have subsequently tested positive for COVID-19, and one has died. Noem has since allowed the state fair to continue as planned and announced plans to add a 13,000-person concert to the annual "Governor's Hunt" that celebrates South Dakota's pheasant season in October, which she has promised will be " bigger and better than ever before."

Noem now stands alongside Florida's GOP Gov. Ron DeSantis, who allowed the Daytona Bike Week to proceed in March with 500,000 people attending, in terms of permitting potential super-spreader events. According to an Aug. 8 article by the New York Times' Jonathan Martin and Maggie Haberman, Lewandowski unsuccessfully lobbied Trump to attend the Sturgis rally in an effort to boost Noem's profile.

Her biggest turn in the spotlight so far came a few weeks later during her address to the Republican National Convention, in which Noem ignored the spread of coronavirus in her state in favor of culture-war platitudes about saving Confederate monuments from left-wing mobs. (South Dakota did not become a state until 1889, and the Dakota Territory played no role in the Civil War.) Noem then ordered the South Dakota Department of Tourism to run a 30-second spot she narrated on Fox News during the convention, at a price of $819,000. That was part of a $5 million tourism campaign using federal coronavirus relief funds that comes with great potential personal gain for the governor.

Like the president she admires, Noem has a history of using her office to boost family members. She hired her daughter as a policy analyst while the latter was still in college, and hired her son-in-law for a different position in the governor's office. Her daughter got a promotion and hefty pay raise at a time when other state employees did not. Without citing any specific threats, Noem's team proposed a $400,000 security fence to be erected around her residence, mostly at taxpayer expense.

Meanwhile, Noem has publicly boasted about turning down federal unemployment relief, citing a healthy state economy she attributes to never locking down. She rejected an additional $300 in unemployment benefits per week for unemployed South Dakotans, refusing to kick in the required $100 in state-provided benefits and claiming South Dakota had recovered nearly 80% of its job losses since the start of the coronavirus pandemic. Noem told Fox News this week that her response has been "a balanced approach" and pointed to the state's tax revenues, which who 8.7% more money coming in this fiscal year than projected.

Noem was quick, however, to reach out to the Trump administration to stop sovereign Native American nations from erecting coronavirus checkpoints on highways leading into their territory, even as the virus spread through Native communities. She told Trump in June that she needed federal assistance "to bring a prompt end to these unlawful tribal checkpoints/blockades on U.S./State highways" as "a final alternative to formal litigation." It's unclear what type of federal reinforcement she sought, but the governor later suggested that her opposition to coronavirus checkpoints in Indian Country was linked to the Keystone XL pipeline protests.

"'For every action that we take, and the tribes take, they're setting precedent," Noem warned in a letter to the Department of Justice. "If we allow checkpoints to shut down traffic in this situation, then we are setting precedent for that to happen far into the future in many other situations as well." She has subsequently refused to meet with the state legislature's bipartisan State-Tribal Relations Committee.

Noem's Trumpian words and deeds, along with her charismatic media appearances and her determination to strip benefits from the unemployed have made her favorite among virtually all factions of the right. Expect her to be a leading Republican presidential contender within the decade.