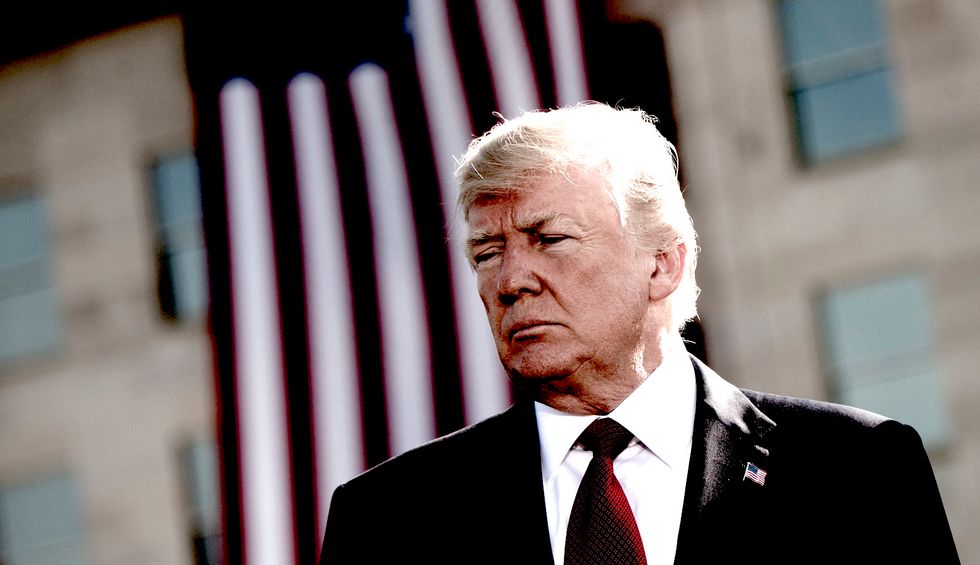 President Donald Trump pauses during the 9/11 Observance Ceremony at the Pentagon in Washington, D.C., Sept. 11, 2017. During the Sept. 11, 2001, attacks, 184 people were killed at the Pentagon. To the left is first lady Melania Trump, and to the right are Secretary of Defense Jim Mattis and Chairman of the Joint Chiefs of Staff Gen. Joseph Dunford. (DOD photo by Navy Petty Officer 1st Class Dominique A. Pineiro)
Heather Digby Parton
and
Salon
September 11, 2020

It figures that Bob Woodward, the man who helped to take down Richard Nixon 45 years ago, would follow up with a big book about Nixon's natural heir to the presidency, Donald Trump. Just as Nixon was undone by tape recordings he foolishly made to document his own corruption, so too Trump foolishly allowed himself to be recorded by Woodward. That's what sets Woodward's book "Rage" apart from all the other Trump books that have come before: We can hear the quotes in Trump's own voice, so he can't get away with calling it fake news.

I think most of us who have been observing this surreal presidency for the past four years have wondered whether Trump is more ignorant than malevolent or vice versa. (Obviously, he's both: It's just a question of which is dominant.) It's been especially hard to know during this pandemic catastrophe because the president has made so many ill-informed comments and odious decisions, from the inane hydroxychloroquine campaign to his decision not to implement a national testing program because most of the people dying in the early days were in blue states.

Listening to Trump blithely tell Woodward at the beginning of February that he knew the pandemic was going to kill a whole lot more people than the flu and that it was an airborne disease proves that he is malevolent first and foremost. You can hear it in his voice — so blandly detached and dispassionate as he talks about what he describes as "deadly stuff." We know he'd been warned about the likelihood of the virus coming to America by this point. Woodward even reports that national security adviser Robert O'Brien had told Trump in January that the virus would be the "biggest national security threat you face in your presidency."

It's clear that Trump simply didn't care about that. And he never changed. CNN reports this anecdote from the book that backs up that impression:

On March 19, as the coronavirus pandemic was exploding, Woodward asked Trump if he ever sat down alone with Dr. Anthony Fauci, director of the National Institute of Allergy and Infectious Diseases, to learn more about the virus."Yes, I guess, but honestly there's not a lot of time for that, Bob," Trump said to Woodward. "This is a busy White House. We've got a lot of things happening. And then this came up."

Woodward notes in the book that Trump had found the time to "carve out hours" to do interviews with him throughout the crisis.

When Trump says he didn't want to start a "panic" it's obvious that he meant he didn't want a stock market panic. Recall that he reportedly went nuts when Nancy Messonnier, director of the National Center for Immunization and Respiratory Diseases at the CDC, did what any public health scientist would do and announced on Feb. 25 that the coronavirus (which Trump already knew was "deadly stuff") was likely to cause massive disruption in the United States. The markets nosedived and Trump was livid, threatening to fire her for doing her job.

The markets had already been dropping before that, but Trump was convinced that he could prop them up with lies and rosy scenarios. They did rebound after the big crash in March, which Trump undoubtedly attributes to his happy talk and his forceful demands that the economy open up regardless of the death and destruction that might result. And maybe he's right about that.

Recall that when states started to open up their economies and the markets began to rebound in May, Trump initially announced he would disband the coronavirus task force altogether. As far as he was concerned, the problem had been solved. (After an outcry, the White House kept the task force, although they stopped meeting as often.)

It's obvious that Trump has never, from the beginning, cared in the slightest about the pain and suffering caused by this deadly virus. I'm reminded of that anecdote about an early April task force meeting in which Trump wanted to open up the economy immediately and just let the pandemic "wash over the country." He was told that would result in many, many deaths. Yet, according to the Washington Post, he raised that idea repeatedly — and essentially, that's the plan he ultimately implemented by default. (Indeed, Trump has now elevated Dr. Scott Atlas, a radiologist he saw on Fox News who believes in herd immunity — but has no particular expertise in epidemics or infectious disease — to a high-status advisory position in the White House.) .

We can say now that when it comes to the pandemic at least, malevolence was the driving force behind Trump's decisions.

But I think the other revelations reported in this book so far can better be attributed to ignorance. For instance, in the very first conversation they had, he told Woodward all about his new secret nuclear program that he claimed Russian President Vladimir Putin and Chinese President Xi Jinping knew nothing about — but would be very impressed if they did. Woodward confirmed this with other sources, but was told that people in the national security realm were a bit shocked that Trump had told a journalist about it.

That's just dumb. So is all the ridiculous folderol over North Korean dictator Kim Jong-un, whom Trump believed could be cajoled into giving up his nuclear weapons by snuggling up to him. Woodward asked people in the CIA about Kim's "beautiful letters" to Trump and was told that while intelligence officials didn't know who had actually written them, they were "masterpieces."

The analysts marveled at the skill someone brought to finding the exact mixture of flattery while appealing to Trump's sense of grandiosity and being center stage in history.

It's pretty obvious who was being played in that relationship.

Meanwhile, Trump's former Defense Secretary James Mattis and former Director of National Intelligence Dan Coats went on the record with Woodward. Coats told him that Trump "doesn't know the difference between the truth and a lie," while Mattis said the president "has no moral compass." And those were the nicer quotes.

Mattis in particular is scathing, telling Woodward, "What we're doing is we're actually showing [enemy nations] how to destroy America. That's what we're showing them. How to isolate us from all of our allies. How to take us down. And it's working very well. We are declaring war on one another inside America. It's actually working against us right now."

When asked whether he thinks it's possible for a president to be tough and also keep the peace he replied. "Not with the current occupant. He doesn't understand. He has no mental framework for these things. He hasn't read."

On Wednesday night, Trump told Sean Hannity on the latter's Fox News prime-time show, "I probably, almost definitely won't read [Woodward's book] because I don't have time to read it." He won't be calling it fake news, though. Because, lordy, there are tapes. Richard Nixon must be rolling over in his grave with laughter.