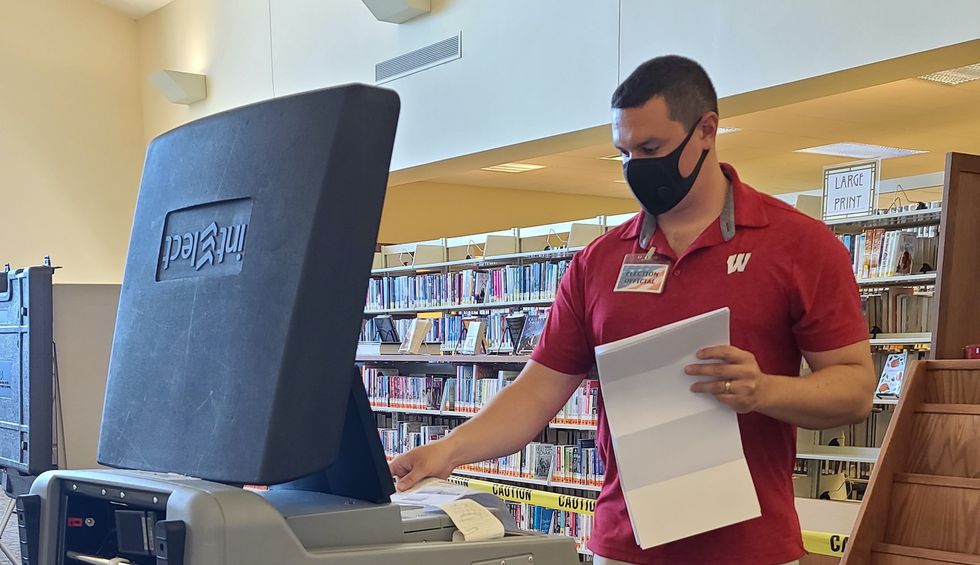 As both presidential candidates headed to Minnesota on Friday and voters in the battleground state became among the first in the country to cast ballots for the high-stakes general election, progressive organizers are trying to alert all Americans that this year—given the Covid-19 pandemic—it will be more important than ever to know how, when, and where they can vote.

Minnesota is one of 10 states that the progressive advocacy group Stand Up America is targeting with new seven-figure get-out-the-vote campaign encouraging Americans to get registered and vote by mail as early as possible or vote in person before November 3.

About 4,500 volunteers are reaching out by text to over 20 million people across Arizona, Florida, Georgia, Michigan, Minnesota, Montana, North Carolina, Pennsylvania, Texas, and Wisconsin to share voting information.

"Stand Up America is really focused on both voter engagement and voter education to make sure that the American people understand that voting does start now and goes until Election Day," Ryan Thomas, a spokesperson for the group, told Common Dreams. "So we're providing millions and millions of Americans with the resources they need to make a plan to vote—whether that's voting early in person, voting absentee by mail, or figuring out what polling place they can go to on Election Day this year."

Given anticipation about long lines at polling places in November as well and health and safety concerns due to the pandemic, Thomas said, "we are really stressing that folks should try to vote as early as possible, whether they do that by mail or in person."

This year, we are investing in Minnesota to help elect leaders up and down the ballot who will fight to protect vot… https://t.co/DxcKQlRUi4
— Stand Up America (@Stand Up America) 1600452788

Minnesota has agreed to suspend its witness requirement for absentee ballots and to send applications for such ballots to all registered voters for the November election thanks to a lawsuit filed by the national and Minnesota arms of the ACLU as well as Faegre Drinker LLP on behalf of the NAACP and individual state residents.

In a statement Thursday, David McKinney, a staff attorney with the ACLU of Minnesota, said the agreement "makes it much easier for people who are at greater risk from Covid, including people of color, the elderly, and those with underlying health conditions, to vote early and to vote without having to go to a polling place. That also leaves the polls free on Election Day for those who must vote in person, protecting the vote and the health of all Minnesotans."

"Former Vice President Joe Biden's first trip to Minnesota as a presidential candidate will find him in Duluth for an afternoon tour of a union training center," according to the Minneapolis-based Star Tribune. "Roughly 150 miles to the west, President Donald Trump is dropping into Bemidji for a dinnertime rally at the local airport."

The results from a pair of ABC News/Washington Post polls released Wednesday show "women, suburban residents, and independents are among the groups lifting Joe Biden to a substantial lead in Minnesota." The Democratic nominee leads the president 57% to 40% among likely voters, according to the polling. However, the state's 10 electoral votes remain a focus of both campaigns because Trump lost Minnesota to former Secretary of State Hillary Clinton by only about 44,500 votes or 1.5%.

Trump's repeated baseless attacks on the security of mail-in voting and frequent fearmongering about a "rigged election" have helped fuel advocates' warnings about the importance of ensuring that every vote is counted in this cycle.

As Common Dreams reported earlier this month, dozens of groups, including Stand Up America, launched Protect the Results,"a coalition of voters ready to mobilize if Donald Trump refuses to accept the results of the 2020 presidential election."

Stand Up America and it partners "are doing the work right now to get out the vote and ensure that a Biden victory is conclusive in this election, but we also know that voting just isn't going to be enough," said Thomas. "Trump is already telegraphing that he is likely to not accept the results of the election if he loses or that he may declare victory prematurely as votes are still being counted."

Such signals from the president continued on Friday. Chris Megerian of the Los Angeles Times reported on Twitter that Trump was "complaining that officials will want to count all the ballots before deciding who wins the election." In response, MSNBC's Chris Hayes declared that "they have really really telegraphed what they're up to."

Leah Greenberg, co-executive director of Indivisible, another progressive advocacy group behind Protect the Results, told Intelligencer on Wednesday that because so many ballots will be cast by mail for the general election, "it's entirely possible we won't know the results after polls closed. That's normal. We need to be patient and, if during that period of time Trump tries to claim that [the election is over and he won], it is going to be important to assess that as having no credibility whatsoever and for our side to push back aggressively."

The New York Times is maintaining a webpage with state-by-state deadlines for requesting absentee ballots and when mailed-in ballots must be postmarked and received. The newspaper points out the United States Postal Service "recommends that voters request them by October 19 to ensure that ballots are returned on time."

According to a USA Today tracker, in addition to Minnesota, early in-person voting for the general election also began Friday in South Dakota, Virginia, and Wyoming. The Washington Post reported that in Virginia's "heavily Democratic Fairfax County, the state's largest jurisdiction, the wait had stretched to four hours—and hundreds of voters—by midday."

"Several voters said they had planned to vote by mail because of the pandemic," the Post noted, "but became increasingly worried about that option amid Trump's unfounded allegations that mailed voting would be 'rigged' and reports that the U.S. Postal Service wouldn't be able to process absentee ballots in time."