'People are sick and tired of the ranting and the ravings': Senator rips Trump effort to rush COVID-19 vaccine for political gain 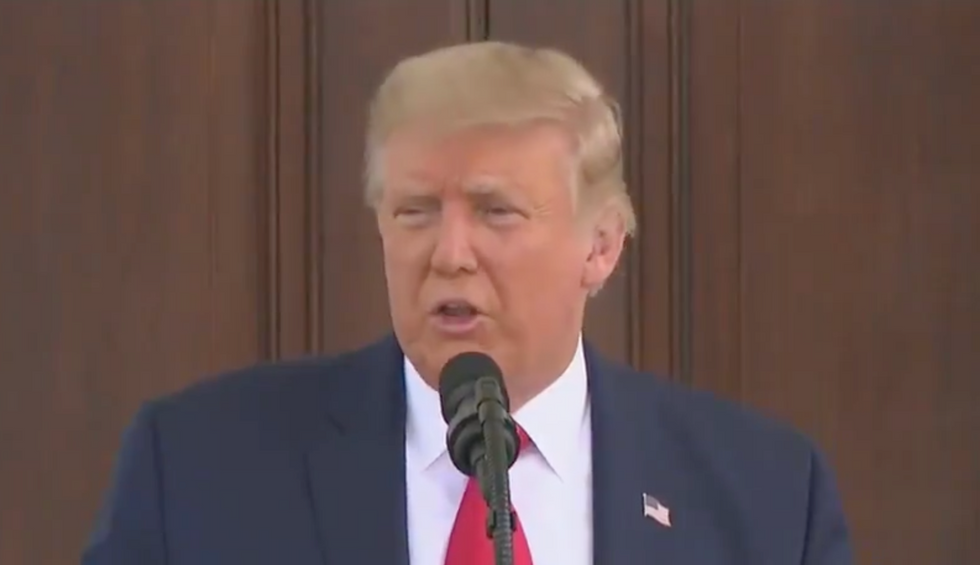 After President Donald Trump on Monday suggested a Covid-19 vaccine could be fully developed and put to market "before a very special day"—apparently referring to the November 3 presidential election—Sen. Bernie Sanders warned that Trump's ongoing politicization of the vaccine process threatens to undermine public trust and safety.

"I think you got a president who's losing it, and I think most people are sick and tired of the ranting and the ravings of Donald Trump," the Vermont senator said in an appearance on CNN late Monday. "Look, everybody wants a vaccine, but we want to make sure that that vaccine is safe. We don't want to see that vaccine put on the market for political reasons."

Sanders went on to urge doctors, scientists, and pharmaceutical companies to "do the right thing and get it onto the market, get it into people's arms when it is ready, not when it suits the political purposes of this increasingly irrational president."

“Let's not politicize this thing,” Sen. Bernie Sanders says about the coronavirus vaccine. “We have developed vacci… https://t.co/PCFhJTqyvF
— The Situation Room (@The Situation Room) 1599521583.0

The Vermont senator's remarks came hours after Trump claimed during a Labor Day press conference Monday that "we're going to have a vaccine very soon, maybe even before a very special day."

Asked whether he's pushing for speedy approval of a coronavirus vaccine for political gain, Trump said: "No, I'm saying that because we want to save a lot of lives. With me, it's the faster the better. With somebody else, maybe they would say it politically but I'm saying it in terms of this is what we need."

"Now," Trump continued, "do benefits inure if you're able to get something years ahead of schedule? I guess maybe they do."

Federal officials have repeatedly cast doubt on the president's suggested timeline, saying there's little chance that a sufficiently tested vaccine will be ready ahead of the November election.

"I don't know any scientist involved in this effort who thinks we will be getting shots into arms any time before Election Day," one anonymous federal official familiar with Operation Warp Speed told CNN Monday, echoing the public statements of other officials involved with the vaccine development effort.