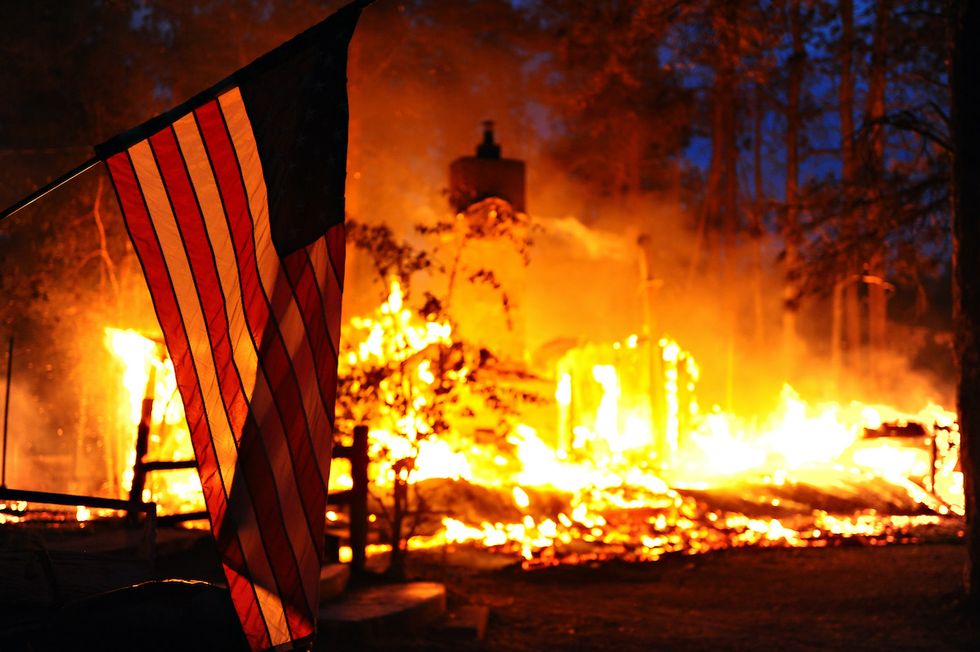 A U.S. flag hangs in front of a burning structure in Black Forest, Colo., June 12, 2013. The structure was among 360 homes that were destroyed in the first two days of the fire, which had spread to 15,000 acres by June 13. The Black Forest Fire started June 11, 2013, northeast of Colorado Springs, Colo., burning scores of homes and forcing large-scale evacuations. The Colorado National Guard and U.S. Air Force Reserve assisted in firefighting efforts. (DoD photo by Master Sgt. Christopher DeWitt, U.S. Air Force/Released)
Kenny Stancil
,
Common Dreams
and
Kenny Stancil
September 14, 2020

A newly published study conducted by a team of climate scientists warns that—barring prompt and rigorous efforts to minimize greenhouse gas emissions—"Earth is on track for some of the strongest, fastest climate change the planet has ever experienced."

Undertaking what Chelsea Harvey of Scientific American described as "one of the most comprehensive investigations of the Earth's climate history," the researchers used chemical analyses of ancient sediments to discern information about our planet's climatological record.

The sediments—obtained by drilling the ocean floor in various locations around the world over the course of several years—contain "the preserved shells of tiny organisms that can tell scientists about the temperature and chemical composition of the ocean when they were formed," Harvey explained.

Some of the sediments are 66 million years old, which enabled the research team to "reconstruct Earth's climate history going back to the mass extinction that killed three-quarters of the planet's species, including dinosaurs," Harvey reported.

What the scientists found is that the planet has gone through four distinctive climate phases, which they label "warmhouse, hothouse, coolhouse, and icehouse states."

In general, transitions between climate states have hinged on changing concentrations of greenhouse gasses, typically generated by "volcanic eruptions and other natural processes," as well as "shifts in the Earth's orbit that affected the amount of solar energy reaching the planet," Scientific American noted.

Fifty million years ago, when Earth was in its hottest phases and long before the existence of humans, planetary temperatures were more than 10 degrees Celsius hotter than they are at present. However, reaching those temperatures took thousands or even millions of years, which is much different than the accelerated warming occurring today, warns the study, published in the journal Science.

While the world has been in an icehouse state for millions of years, explained Harvey, "Earth could once again reach a temperature threshold not seen for at least 34 million years" in only a few centuries unless society limits greenhouse gas emissions.

Prior to the industrial era, it would have taken thousands of years, at least, for such dramatic levels of warming to unfold.

According to Jim Zachos, a paleoclimatologist at the University of California, Santa Cruz, and a co-author of the new paper, the worst-case scenario by 2300 shows "the change in mean global temperature is larger than most of the natural variability going back over the last 66 millions years related to changes in the Earth's orbit."

Harvey pointed out that "feedback processes that can speed things up or slow things down" make it difficult to "predict future change, especially over relatively short periods of time."

However, by "reconstructing the Earth's long-term climate history," this study can help scientists test the accuracy of models used to make projections about the future by comparing them to simulations of the past, which could yield useful knowledge about "how climate change could unfold in the coming decades and centuries," explained Scientifc American.

"It's not an inevitable future," Harvey stressed, adding that "with immediate and stringent action to reduce climate change, the world can keep global temperatures from rising more than a few degrees above their preindustrial levels."