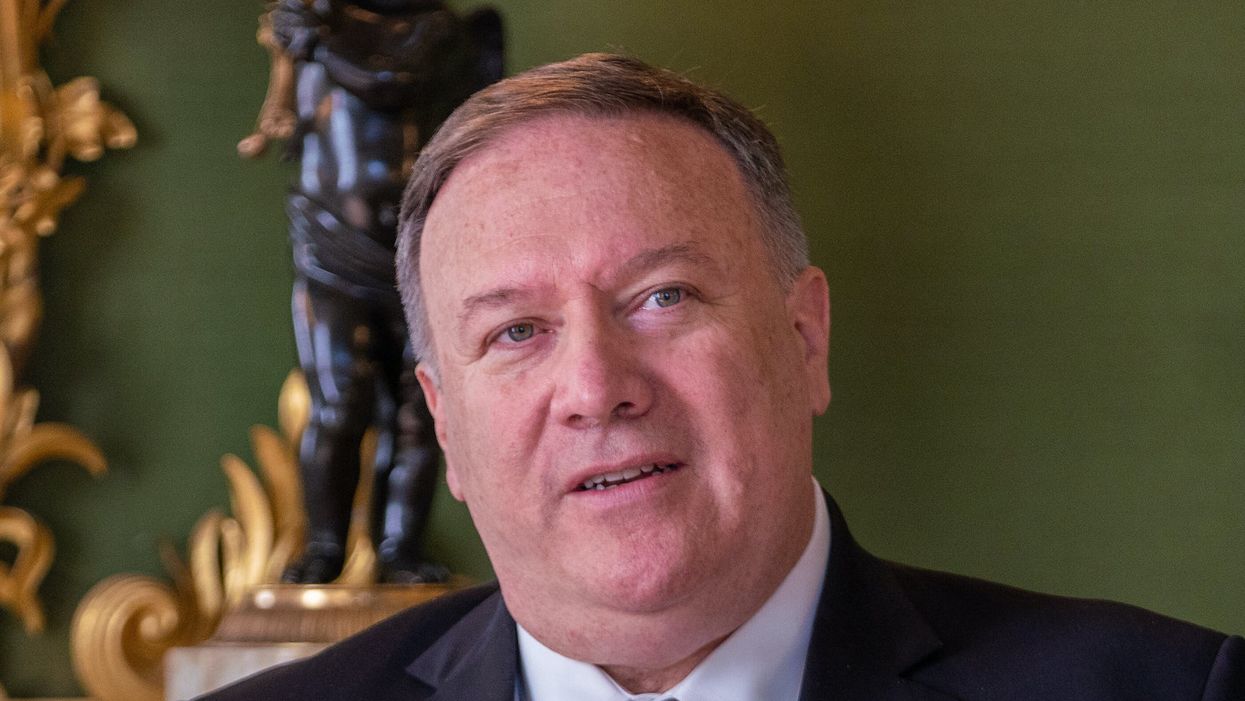 Prior to ex-House Republican Mike Pompeo becoming Trump's secretary of state, it was generally understood that U.S. secretaries of state were not allowed to use the tools of their office for rank partisan politicking. Using government resources to campaign is illegal; turning the top diplomatic job in the country into a tool of partisanship damages U.S. credibility abroad by signaling, to world counterparts, that the U.S. diplomat is In This For Themselves.

All of that is gone now because Donald Trump simply chose to ignore those constraints, and Republicans—with the singular exception of one Mitt Romney, exactly once—wholeheartedly adopted the same merging of party and state as the new way things are done. This was helped along immensely by Trump's surrounding of himself with hard-right ex-House Republicans contemptuous of the rules from the outset. Mike Pompeo is a poster child for this. He continues to assist Trump in the cover-up of a criminal Ukrainian extortion scheme—one timed to allow Russian incursions into that country to proceed and be solidified while much needed U.S. aid was used to pressure for Trump reelection favors. He continues to abet Trump's incompetent dismantling of U.S. foreign policy infrastructure.

And, of course, Pompeo is using his State Department role to campaign aggressively for Trump and Republicans throughout the country. The premise is that key Trump-supporting demographics and swing states just happen to need conservative foreign policy priorities explained to them by, literally, the top U.S. diplomat—one who admittedly has little else to do since all such policy decisions have been stripped from him and his government agency in favor of the new policy, Whatever Trump Last Said. The reality is that Pompeo is touring the country giving campaign speeches to, as the AP reports, a white evangelical church in Plano, Texas; the hard-right Value Voters Summit; and other appearances in Wisconsin, Florida, Tennessee, Kentucky, and of course his home state of Kansas. Pompeo has famously been eyeing higher office himself—a plan that briefly looked scuttled when Pompeo was implicated in impeachable crimes, but one Pompeo appears to be inching back to with hopes that voters no longer remember or resent him for that now that the Trump administration has delivered at least a half-dozen other scandals and death-dealing clusterfucks for them to chew on instead.

The important thing to remember here is that Pompeo is crooked. He is crooked in the William Barr way, and fairly precisely: He has been caught directly assisting in Trump's impeached-for acts; he has been caught in a campaign to cover up those acts and his involvement for Trump's benefit and his own; he has done each of these things in service of elevating Republican power, regardless of legality or institutional norms; and he makes no particular effort to hide the use of his office as explicitly partisan, to be used for shoring up allies and punishing enemies.

While Barr pressures his underlings into producing documents meant to portray Trump's detractors and investigators as the "true" criminals of Russian election hacking while undermining further investigations into Trump and all allies, Pompeo weaves through the country on a heavy campaign schedule to tell conservative audiences that they should "go to the polling place and express your preference" for his hard-right claims and declarations, as AP quoted him telling his Texas audience.

Without dwelling on it: Again, Mike Pompeo using his government perch to address the Republican National Convention—from Israel, no less—was such a grotesque insult to supposed diplomatic nonpartisanship that it would have likely ended with Pompeo's removal from his post during any of the last half-century's worth of presidencies. Republican lawmakers, however, are embracing Pompeo's acts as they are Trump's, and Barr's. There is no Republican caucus demanding Trump adhere to the rule of law, or the Hatch Act, or basic expected decencies.

The whole point of immunizing Trump during impeachment was to enable further corruption. It was the expected outcome. It clearly worked, as Trump's rapid gutting of oversight offices and inspectors showed. We are now at a point where Trump and Barr are openly crafting plans to eliminate votes if the November elections do not go his way, and continue eliminating votes for as long as it takes until the Republican Party can claim a crooked victory.

The reasons are not just to retain power, though; Trump's team and Trump's allies need a victory for more personal reasons. There has been a mountain of criminal acts, cover-ups, ethical violations, and rank corruption from Barr, from Pompeo, from Trump himself, and other Trump cabinet members past and present. The moment they lose power, there is a danger that the remaining shards of true, neutral law enforcement will come for them—and those ex-officials will no longer have means to block those investigations.

Every investigation currently being blocked and corrupted can only be blocked or corrupted so long as the corrupters remain in power. Republicans like Pompeo, still identified as having played a role in international extortion whether his Republican Senate allies are supportive or are not, has no time to worry about laws or norms as he scurries around the country to protect himself from the consequences of his own corruption.