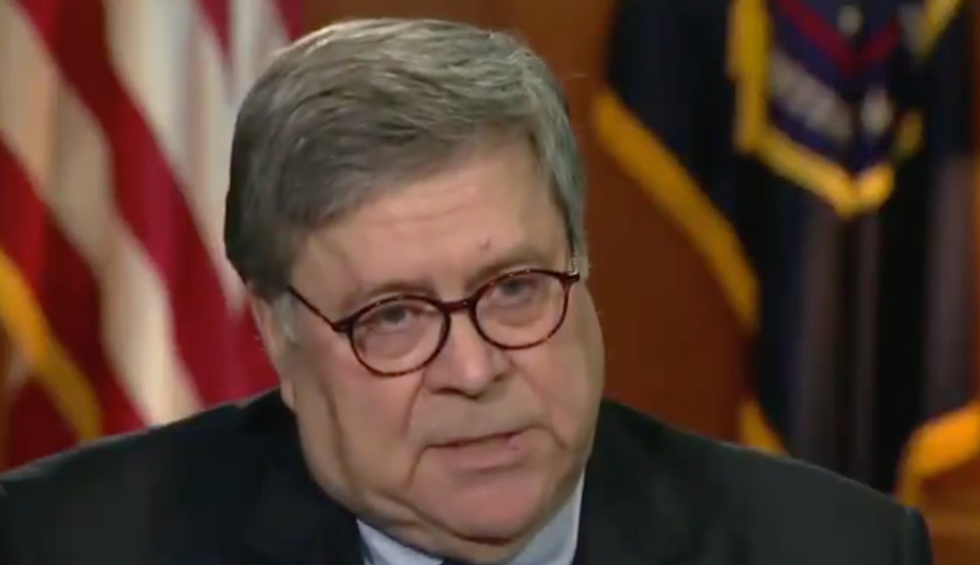 A new report from the Wall Street Journal on Wednesday found that Attorney General Bill Barr has been pressuring federal prosecutors to bring aggressive charges against violent protesters across the United States, a push that some experts fear could have the effect of chilling constitutionally protected free speech.

In a conference call with U.S. attorneys across the country last week, Mr. Barr warned that sometimes violent demonstrations across the U.S. could worsen as the November presidential election approaches. He encouraged the prosecutors to seek a number federal charges, including under a rarely used sedition law, even when state charges could apply, the people said.

This demonstrates that Barr seeks to use the heavy hand of the federal government against the protests. It's notable that while President Donald Trump and the attorney general have been clearly outraged by violence that has emerged from the protests — the vast majority of which have been peaceful — the federal government has done little to address the actual substance of the demands for racial justice from protesters.

The urge to clamp down aggressively on the protests, most memorably on display in June when Trump and Barr had Lafayette Square violently cleared of peaceful demonstrators ahead of a photo-op, arguably shows clear animus against the ideology behind the Black Lives Matter movement. And that raises the concern that pushing for aggressive charges like sedition, which alleges a conspiracy to rebel against government authorities, is a way to punish people, in part, for free speech and beliefs.

People who engage in looting, violence, and property damage can always be charged for these state-level crimes. Suggesting the need for more aggressive prosecutions reflects Barr's design to wage ideological battle with the tool of federal law enforcement, rather than to equally protect American citizens.

The Journal quoted one legal expert skeptical of the move:

“There’s all these different statutes the government can use if they are worried about things like property damage,” said Jenny Carroll, a University of Alabama law professor. She said that turning to statutes like sedition would mark an escalation in the government’s effort to quell the violence. “If you start charging those people, even if you don’t get a conviction, it may make people think twice before going out to exercise their right to free speech.”

Former federal prosecutor Joyce Vance said: "Violent crime should be addressed appropriately, altho most often, it is a matter for state, not fed'll, prosecution. The risk here is Barr's directive will have a chilling effect on peaceful protest & free speech especially given the unusual suggestion to use the Sedition Act."

She pointed to the section of the U.S. criminal code defining sedition:

"Note that it's a conspiracy provision, which gives prosecutors broad latitude to charge an agreement to engage in this conduct. And, it's a 20-year penalty," she said.

Ryan Goodman, the co-editor-in-chief of Just Security, noted that while there genuinely are right-wing groups that seek to overthrow the government, Barr seems laser-focused on going after left-wing groups.

The Journal reported pointed out that sedition prosecutions, even against militia groups, can be fraught:

One of the few cases in recent years to involve allegations of a sedition conspiracy ended in acquittal. Several members of a Michigan-based militia group were accused in 2010 of plotting to kill a local police officer as part of a plan to start an armed clash with state and federal authorities. They were found not guilty in 2012 by a federal judge who said the government’s case was built on “circumstantial evidence” and didn’t prove beyond a reasonable doubt the defendants had entered a “concrete agreement to forcibly oppose the United States Government.”

The U.S. Attorney in Detroit at the time of that prosecution, Barbara McQuade, said prosecutors have long-grappled with how to approach ideologically-motivated violent plots. “You can’t penalize people for First Amendment activity, but it leaves fewer tools when you have a group plotting an attack of some sort,” said Ms. McQuade, who now teaches at the University of Michigan.

Other evidence, and Barr's own public comments, strongly indicate that the administration is actively downplaying right-wing violence while exaggerating the threat from the left.

Elizabeth Neumann, a former assistant secretary of counterterrorism in the Department of Homeland Security, has specifically raised these concerns, as NPR reported:

When Trump finally started using the term "domestic extremism" himself in the summer of 2020, it was in reference to the violence and looting that occurred during the protests across the country against police brutality targeting Black Americans, which the president attributed to "antifa." For Neumann, this was an obvious red herring. She says that the numbers don't bear out the idea that left-wing violence is as much of a problem as right-wing violence, and arrests during the summer's protests demonstrate that.

"If you look at the people that have been arrested for that, by and large, I mean, it's the boogaloo movement or it's an association with QAnon. It's the right side of the spectrum. It is not antifa." She's unequivocal about this: "The threat of domestic terrorism is not from antifa. It is from these right-wing movements."