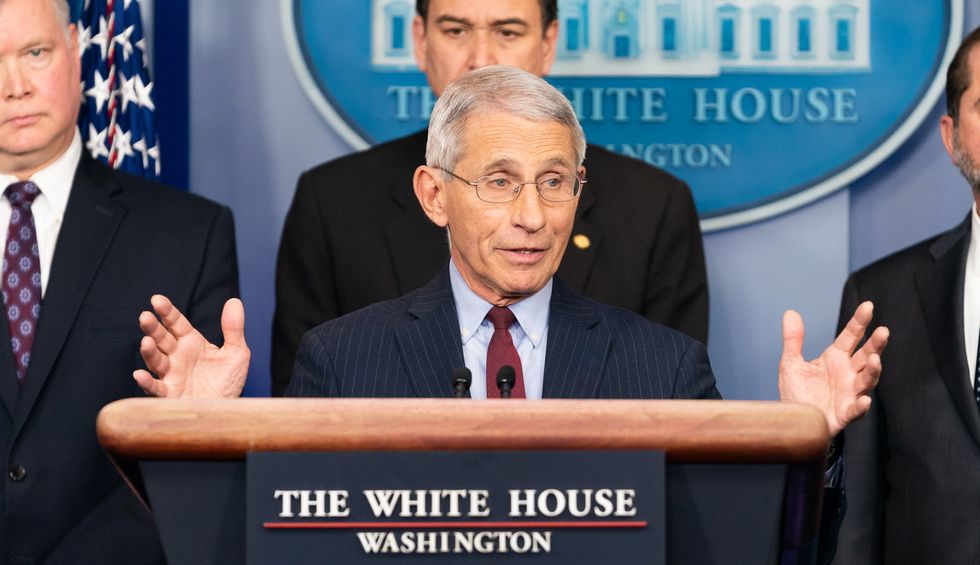 Dr. Anthony S. Fauci, Director of the National Institute of Allergy and Infectious Diseases, addresses a briefing on the latest information about the Coronavirus Friday, Jan. 31, 2020, in the James S. Brady Briefing Room of the White House. (Official White House Photo by Andrea Hanks)
Andrea Germanos
and
Common Dreams
September 10, 2020

Reporting from Politico Wednesday revealed that a Trump-allied official within the Department of Health and Human Services tried to censor Dr. Anthony Fauci from communicating to the press dangers the coronavirus may pose to school children.

According to Politico, the messaging directives came from Paul Alexander, a Trump administration appointee at the Department of Health and Human Services. Alexander is a senior adviser to Michael Caputo, a Trump ally and assistant HHS secretary for public affairs.

Politico obtained multiple emails from Alexander that reflect his responses to what Fauci—director of the National Institute of Allergy and Infectious Diseases (NIAID)—planned on telling outlets including Bloomberg and HuffPost. They included messages that "are couched as scientific arguments" but "often contradict mainstream science," according to the reporting.

Some unproven theories that HHS adviser Paul Alexander pressed to include in Dr. Fauci's talking points: - There i… https://t.co/Izk90kQ3DW
— Sarah Owermohle (@Sarah Owermohle) 1599674903.0

The outlet cited as one example an Aug. 27 email in which Alexander wrote that he continues "to have an issue with kids getting tested and repeatedly and even university students in a widespread manner…and I disagree with Dr. Fauci on this. Vehemently."

Over @HHSGov officials have been trying to tell #AnthonyFauci what he can/cannot say, so that he won't allow his kn… https://t.co/pBptqgflge
— Laurie Garrett (@Laurie Garrett) 1599678694.0

In another email from Tuesday, Alexander suggested children have "essentially zero" risk if they are exposed to the coronavirus and pushed Fauci's press team to make sure Fauci told MSNBC that children should not wear masks at school. From Politico:

"Can you ensure Dr. Fauci indicates masks are for the teachers in schools. Not for children," Alexander wrote. "There is no data, none, zero, across the entire world, that shows children especially young children, spread this virus to other children, or to adults or to their teachers. None. And if it did occur, the risk is essentially zero," he continued — adding without evidence that children take influenza home, but not the coronavirus.

Alexander's repeated efforts at push Fauci to parrot the administration's anti-science line, however, may have been for naught.

"No one tells me what I can say and cannot say," Fauci said. "I speak on scientific evidence."

It did not, however, mark Alexander's first attempts at controlling the narrative from federal health experts.

The Washington Post reported in July that he made similar efforts with CDC officials. In a June email to CDC officials, Alexander wrote that the agency's warning about Covid-19 impacts on women "reads in a way to frighten women . . . as if the President and his administration can't fix this and it is getting worse."

Virologist Dave O'Connor weighed in on the new reporting on Twitter, writing, "This sort of story will be recalled years from now as an example of the government interfering with science, with predictably disastrous results."