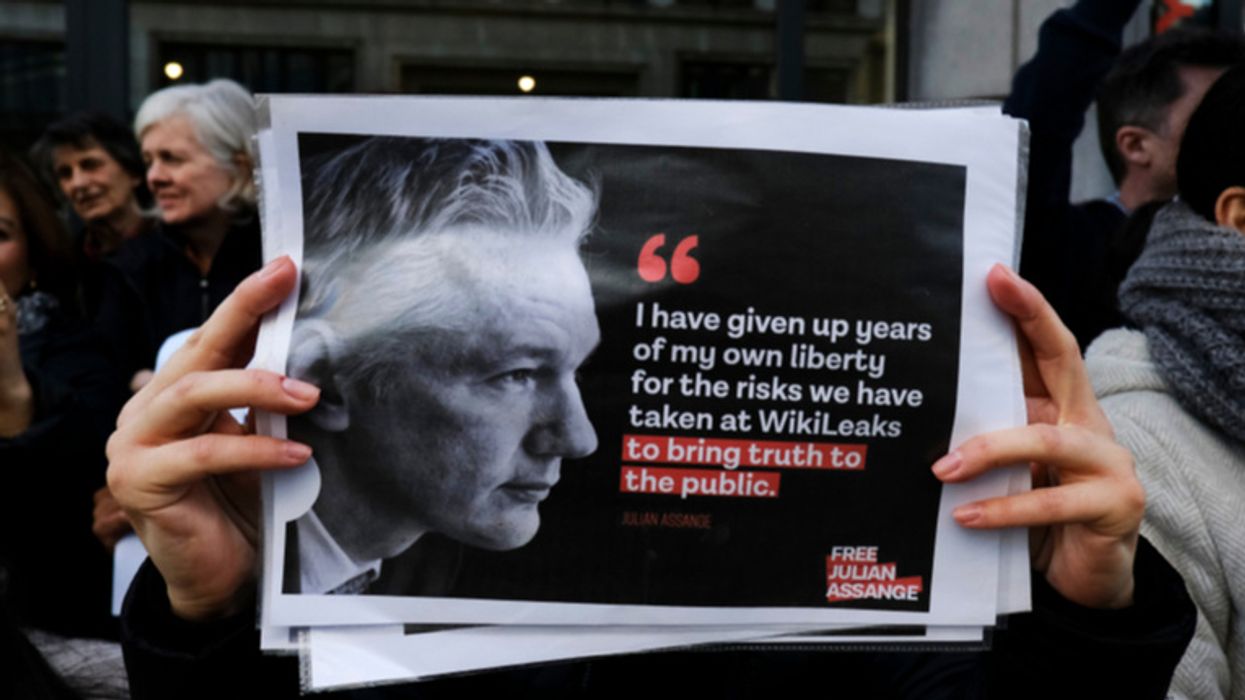 Labeled the media "trial of the century," WikiLeaks founder Julian Assange's extradition hearing is currently taking place in London—although you might not have heard if you're relying solely on corporate media for news. If extradited, Assange faces 175 years in a Colorado supermax prison, often described as a "black site" on US soil.

The United States government is asking Britain to send the Australian publisher to the US to face charges under the 1917 Espionage Act. He is accused of aiding and encouraging Chelsea Manning to hack a US government computer in order to publish hundreds of thousands of documents detailing American war crimes, particularly in Afghanistan and Iraq. The extradition, widely viewed as politically motivated, has profound consequences for journalists worldwide, as the ruling could effectively criminalize the possession of leaked documents, which are an indispensable part of investigative reporting.

WikiLeaks has entered into partnership with five high-profile outlets around the world: the New York Times, Guardian (UK), Le Monde (France), Der Spiegel (Germany) and El País (Spain). Yet those publications have provided relatively little coverage of the hearing.

Since the hearing began on September 7, the Times, for instance, has published only two bland news articles (9/7/20, 9/16/20)—one of them purely about the technical difficulties in the courtroom—along with a short rehosted AP video (9/7/20). There have been no editorials and no commentary on what the case means for journalism. The Times also appears to be distancing itself from Assange, with neither article noting that it was one of WikiLeaks' five major partners in leaking information that became known as the CableGate scandal. 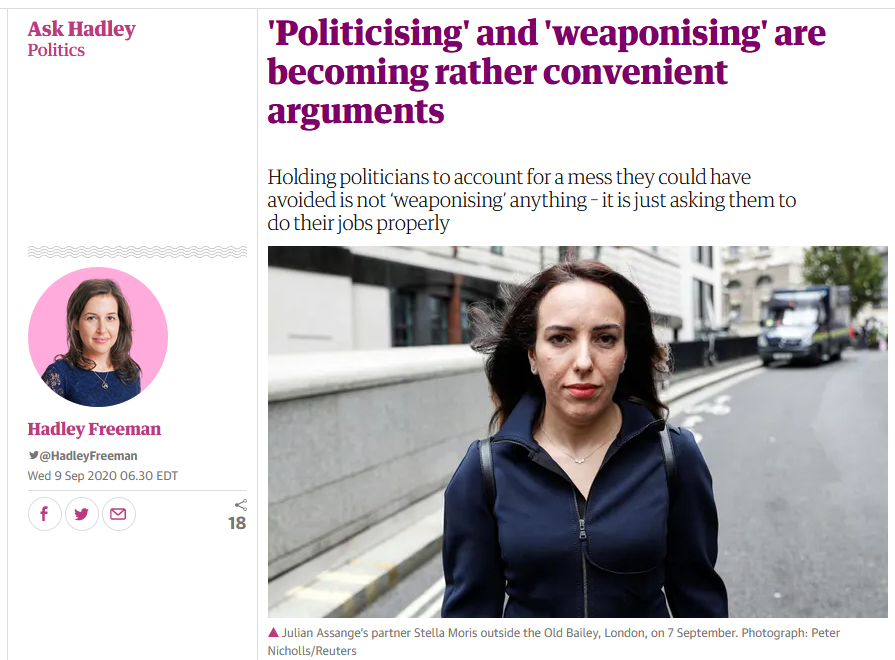 Guardian columnist Hadley Freeman (9/9/20) turned a reader's question about "liv[ing] in a time of so much insecurity" into a bizarre rant against Julian Assange and his partner, Stella Moris.

The Guardian, whose headquarters are less than two miles from the Old Bailey courthouse where Assange's hearing is being held, fared slightly better in terms of quantity, publishing eight articles since September 7. However, perhaps the most notable content came from columnist Hadley Freedman (9/9/20).

When asked in an advice article: "We live in a time of so much insecurity. But is there anything we can expect from this increasingly ominous-looking winter with any certainty?" she went on a bizarre tangential rant ridiculing the idea that Assange's trial could possibly be "politicized," also crassly brushing off the idea that his young children would never see their father again, and never answering anything like the question she was asked. Holding people to account "for a mess they could have avoided," she notes, "is not 'weaponizing' anything — it is just asking them to do their jobs properly." She also claimed that believing Assange's trial was politicized was as ridiculous as thinking antisemitism claims were cynically weaponized against Labour leader Jeremy Corbyn, which, she meant to suggest, was a preposterous idea. This was not an off-the-cuff remark transcribed and published, but a written piece that somehow made it past at least one editor.

Like the Times, the Guardian appeared to be hoping to let people forget the fact it built its worldwide brand off its partnership with WikiLeaks; it was only mentioned in a forthright op-ed by former Brazilian president Lula da Silva (9/21/20), an outlier piece.

The Guardian should be taking a particularly keen role in the affair, seeing that two of its journalists are alleged by WikiLeaks to have recklessly and knowingly disclosed the password to an encrypted file containing a quarter-million unredacted WikiLeaks documents, allowing anyone—including every security agency in the world—to see an unredacted iteration of the leak. In 2018, the Guardian also falsely reported that Trump campaign chief Paul Manafort had conducted a meeting with Assange and unnamed "Russians" at the Ecuadorian embassy (FAIR.org, 12/3/18). And, as former employee Jonathan Cook noted, the newspaper is continually being cited by the prosecution inside the courtroom. 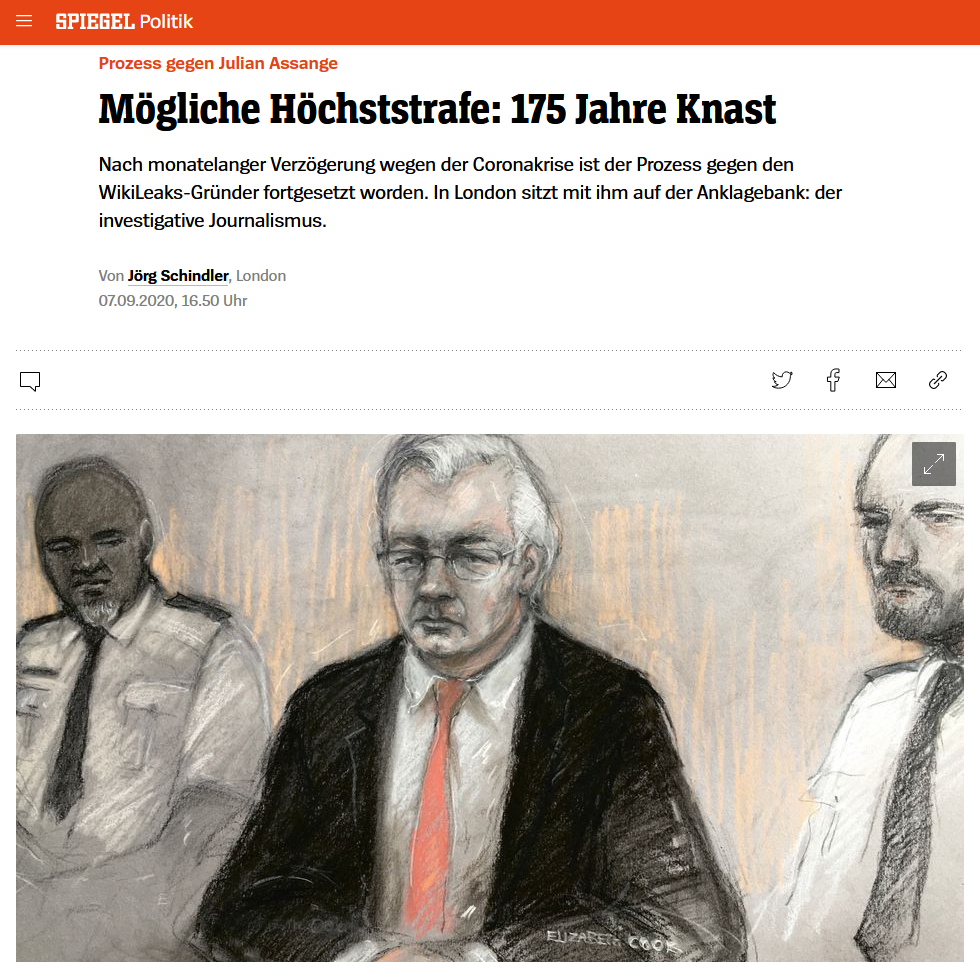 There were only two articles in the English or French versions of Le Monde (9/7/20, 9/18/20) and only one in either of Der Spiegel's English or German websites (9/7/20), although the German paper did at least acknowledge its own partnership with Assange. There was no coverage of the hearings in El País, in English or Spanish, though there was a piece (9/10/20) about the US government thwarting a Spanish investigation into the CIA spying on Assange at the Ecuadorian embassy in London—accompanied by a photo of a protester against his extradition.

The rest of corporate media showed as little interest in covering a defining moment in press freedom. There was nothing at all from CNN. CBS's two articles (9/7/20, 9/22/20) were copied and pasted from news agencies AP and AFP, respectively. Meanwhile, the entire sum of MSNBC's coverage amounted to one unclear sentence in a mini news roundup article (9/18/20).

Virtually every relevant human rights and press freedom organization is sounding the alarm about the incendiary precedent this case sets for the media. The Columbia Journalism Review (4/18/19), Human Rights Watch and the Electronic Frontier Foundation note that the government includes in its indictment regular journalistic procedures, such as protecting sources' names and using encrypted files—meaning that this "hacking" charge could easily be extended to other journalists. Trevor Timm, founder of the Freedom of the Press Foundation, told the court this week that if the US prosecutes Assange, every journalist who has possessed a secret file can be criminalized. Thus, it essentially gives a carte blanche to those in power to prosecute whomever they want, whenever they want, even foreigners living halfway around the world.

The United Nations has condemned his persecution, with Amnesty International describing the case as a "full-scale assault on the right to freedom of expression." Virtually every story of national significance includes secret or leaked material; they could all be in jeopardy under this new prosecutorial theory.

President Donald Trump has continually fanned the flames, demonizing the media as the "enemy of the people." Already 26% of the country (including 43% of Republicans) believe the president should have the power to shut down outlets engaging in "bad behavior." A successful Assange prosecution could be the legal spark for future anti-journalistic actions.

Yet the case has been met with indifference from the corporate press. Even as their house is burning down, media are insisting it is just the Northern Lights.