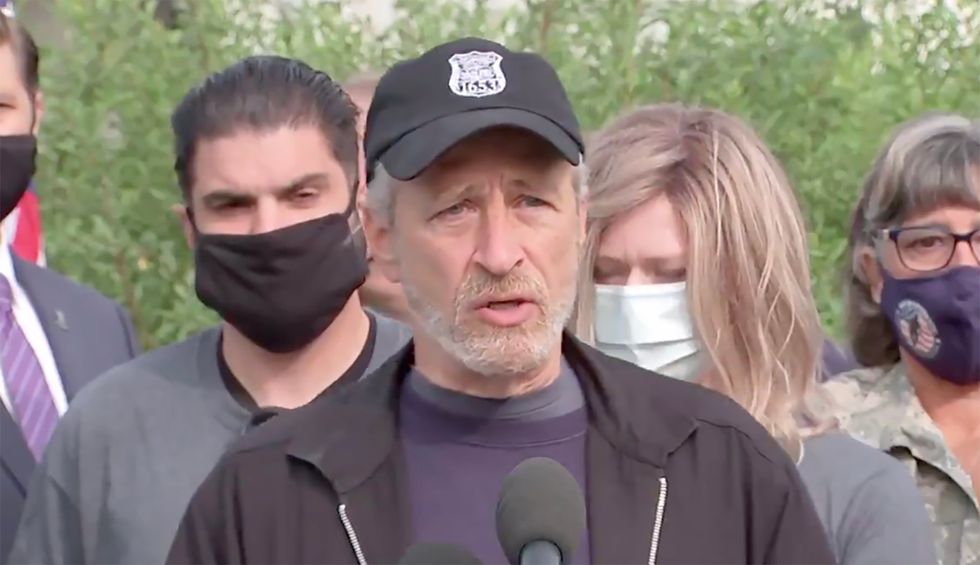 For years the Department of Veterans Affairs (VA) has been criticized for neglecting the issues of some veterans, including those affected by toxic fumes inhaled during deployments. Veterans advocates have launched a campaign to raise both awareness and aid for those millions of veterans exposed to toxic burn pit fumes while deployed in the Iraq and Afghanistan wars. While the department acknowledges little tracking has been done to provide a true analysis of the poisons in the air, it has insisted that individuals must prove a connection between rare diseases and the fumes inhaled, the Military Times reported.

Former The Daily Show host Jon Stewart joined advocates on Capitol Hill Tuesday to urge Congress to pass a bill, sponsored by New York Sen. Kirsten Gillibrand and California Rep. Raul Ruiz, that would treat veterans' exposure to burn pits as a presumptive condition for any veteran of either war. According to the Military Times, as many as 3.5 million veterans could be eligible for benefits under the legislation. Under the bill, medical conditions associated with exposure to burn pits including cancers, asthma, chronic obstructive pulmonary disease, and other rare diseases will be covered.

Stewart has been vocal in similar affairs, including advocacy for Sept. 11 emergency responders. He hopes the bill is as successful as his efforts on behalf of those responders.

"The parallels are incredible. I'd say the only difference between what happened with the 9/11 community and what's happening with the veteran community is the 9/11 community was injured by toxic exposure from an enemy attack," Stewart told Fox News. He added that the injuries have been brought upon veterans by the U.S. "We did this to ourselves. The smoke, the toxins, those pits were dug by contractors hired by the [Department of Defense]. They knew about it," he said. "Their own reporting, internal reporting, shows the air quality, shows the variety of toxins” involved in the pits, he added.

Jon Stewart is on Capitol Hill advocating for legislation that would help US veterans exposed to burn pits. https://t.co/TrRqHwUFju
— NBC Politics (@NBC Politics)1600182348.0

According to The New York Times, service members have been exposed to more than 250 of these burn pits used to dispose of trash while deployed in the Iraq and Afghanistan wars. Similar to veterans of the Vietnam War whose illnesses were linked to Agent Orange, veterans are demanding justice for the illnesses they have developed due to this exposure. “We have to do the same for the veterans of the war on terror,” Gillibrand said during a press conference Tuesday. “To put it simply, the bill says that if you were there you are covered. Plain and simple. This bill applies common sense and common decency to a very broken process.”

Veterans believe cancers, lung diseases, and other respiratory illnesses can be connected to their exposure. While it has recently garnered attention, the issue isn’t new. For years, Democratic presidential candidate Joe Biden has connected toxic substances from burn pits to the brain cancer his son Beau suffered from after serving in the Iraq War, the Times reported. “Service members are returning from the battlefield only to become delayed casualties of war,” Ruiz said. “This is the Agent Orange of this generation … We need to be taking care of our veterans and saving lives.”

Families of those who are dying and already deceased joined the advocates in creating awareness on the issue. “My husband is dead because America poisoned its soldiers,” Danielle Robinson said, according to the Military Times. Robinson is the wife of Sgt. 1st Class Heath Robinson, who died after battling respiratory illnesses the family believed were related to his burn pit exposure. “It’s a national disgrace that our war heroes need celebrities to speak out on their behalf to get this addressed.”

While advocates praised the efforts, they noted the few measures passed into law for veterans’ health are flawed. Rosie Torres, executive director of Burn Pits 360, noted that although the VA has listed more than 200,000 individuals on its registry as experiencing issues related to open-air waste pits, only a few have received compensation for their injuries. “What do you do when you have vets suffering?” former VA Secretary David Shulkin said of the issue. “Right now, we’re making our vets wait without getting help. That’s just wrong ... We have to change our system.”

While advocates understand the difficulty of passing the legislation, they are determined to do so. “This is not about science, this is about money,” Stewart said during the press conference. “Listen to these families … Delaying care and waiting for veterans to die is not a mantle worthy of our country.”

During the press conference, Stewart again connected the new legislation to measures passed to compensate emergency personnel after the Sept.11 attacks. “When it was done, we thought it was done. But it turns out that the warfighters that were sent to prosecute the battle based on the attack on 9/11 now suffer the same injuries and illnesses that the first responders suffer from, and they’re getting the same cold shoulder from Congress that they received,” Stewart said. “And so the fight starts again.”